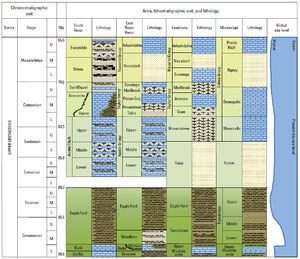 Since the early 1920s, oil and gas production from the Austin Chalk has been ongoing in Texas. A total of nearly one billion barrels of oil and nearly 6 trillion cubic feet of natural gas have been produced to date, much of that from the well-known Giddings Field. The Austin Chalk in Texas overlies and is mainly charged by the prolific underlying Eagle Ford Group. The Tokio and Eutaw Formations are time-equivalent stratigraphic units located east of the Texas-Louisiana border and are also productive for oil and gas. The Tokio, located mainly in southern Arkansas and northern Louisiana, contains sandstone and lignitic shales rather than chalk or limestone, and the Eutaw, located mostly in Mississippi and Alabama, consists of sandstone and carbonaceous shale (Figure 1).

Figure 2 Austin Chalk production (combining Texas and Louisiana) from January 2010 through September 2020 in millions of barrels per day. Blue line shows the onset of increased production from the Austin due to the application of modern drilling methods and the red line indicates the onset of pandemic-related production declines in the U.S. Source: U.S. EIA[2].

The Austin Chalk and equivalent units to the east are reservoirs for oil and gas generated by the Eagle Ford in Texas but sources of oil and gas in these units vary spatially across the onshore Gulf Coast and include the Lower Smackover, Haynesville, and Tuscaloosa Marine Shale. Regional and local-scale faults and salt diapirs facilitate migration into these units and act as reservoir, trap, and seal in conventional fields[3]. Where it overlies the Eagle Ford and other Cenomanian-Turonian source rocks in Texas, Louisiana, and Mississippi, the Austin Chalk exhibits continuous reservoir behavior. Pressure transmission through faults and fractures in the brittle basal Austin enables petroleum migration into the unit, leading to an areally extensive continuous accumulation of resource. Chalk and marlstone are the dominant lithologies in the Austin, which was deposited on a broad, low relief marine shelf that deepened during the Coniacian-Santonian marine transgression to the south and west. The depositional environments for the Tokio and Eutaw Formations were shallow- to marginal-marine at the leading edge of the marine transgression [4]. 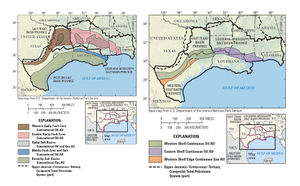 Figure 3 Conventional (left) and continuous (right) assessment unit boundaries determined as part of the 2019 USGS assessment of undiscovered, technically recoverable oil and gas resources in the Austin Chalk and related units in Texas and Louisiana[4].

Oil migration into the Austin appears to have been through microfractures connected to larger tectonic fractures and the porous chalk matrix. Until the widespread adoption of horizontal drilling and hydraulic fracturing, naturally fractured zones within the chalk were the primary targets and petroleum stored in the rock matrix was initially ignored due to the low permeability of the chalk. Continued improvements in drilling technology and the application of modern drilling methods has made it possible to identify and target porous intervals in the Austin chalk using horizontal wells and multi-stage fracturing jobs. These efforts have significantly increased production from the Austin over the last five years (Figure 2).

The U.S. Geological Survey recently completed an updated assessment of oil and gas resources in the Austin Chalk and Tokio and Eutaw Formations [4]. Five conventional and three continuous assessment units were defined (Figure 3) with total estimated mean undiscovered, technically recoverable oil and gas resources of 6.9 billion barrels of oil and 41.5 trillion cubic feet of natural gas. Like the Eagle Ford, the Austin play differs from many other U.S. shale plays in that it is productive for both oil and gas.