Buoyancy is the tendency for a body (or a drop of immiscible fluid) to float or rise when submerged in a fluid of greater density. Where two immiscible fluids (oil and water) occur together, they create a buoyancy pressure that is a function of the density difference between the two fluids and the length of the less-dense fluid column.

If immiscible fluids occur together, they segregate according to their densities: the lightest (least dense) fluid floats to the top, and the heaviest (most dense) sinks to the bottom of the container (or compartment). When they occur in a container free of capillary effects—such as a bottle, lake, or cave—the different fluids exhibit a sharp, flat interface.

Interaction between capillarity and buoyancy

Virtually every reservoir holds its fluids in a porous network. The pores are normally well within the size range where capillary forces are strong. To fill a reservoir with oil or gas, the buoyancy force driving the oil or gas into the pores of the reservoir must overcome the capillary force developed between the original fluid and the displacing fluid. The smaller the pore throats, the greater the capillary pressure associated with them.

Following the path of least capillary resistance, nonwetting fluids (gas or nonwetting oil) first move into the pore system that has the largest pore throats. Later, as the column height of the oil or gas grows and the buoyancy pressure increases, the hydrocarbons begin migrating into pores with smaller and smaller pore throats (in a water-wet system).

The buoyant pressure (Pb) exerted by a column of hydrocarbons against the overlying seal is as follows:

Or, in the mixed units of the oil field: 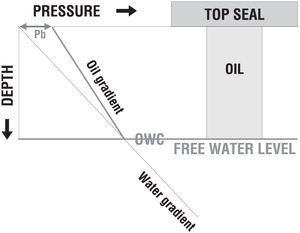 Figure 1 Pressure-depth plot through an oil column trapped beneath a top seal.