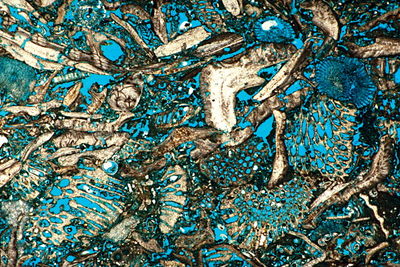 Carbonate reservoir descriptions are based on observations of depositional and diagenetic fabrics and pore space from core and cuttings samples. The descriptions are correlated with wireline log responses and incorporated into geological facies and/or diagenetic models in order to map porosity, water saturation, and permeability.

Figure 1 Dunham's[1] classification of carbonate rocks according to depositional texture.[2]

The majority of carbonate sediments are produced in shallow, warm ocean waters by extraction of calcium carbonate from seawater by organisms to form their shells or skeletal material. The sediments are composed of a spectrum of sizes and pore geometries. The Dunham classification (Figure 1) describes depositional textures in a manner that can be related to pore geometries. The grain-supported textures tend to have larger pore sizes than do mud-supported textures. The textures have different geometries in different depositional environments. 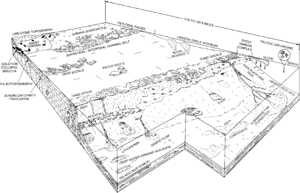 The shallow shelf interior environment (Figure 2) is dominated by low-energy waters that allow lime mud to accumulate. Storms, however, churn the sediment into suspension, winnowing out the fine-sized material and concentrating the coarse material. Near shorelines, the shelf environment may be composed of offshore bars and spits oriented parallel to shoreline. Shorelines that face heavy wave action accumulate carbonate sand or gravel. Tidal currents are concentrated in channels between islands and produce tidal deltas on the lee side of the island.

The shelf margin complex (Figure 2) is characterized by the presence of carbonate sands and reefs. Reefs are commonly found at the shelf edge where their rigid framework can withstand strong wave action and they can take advantage of the nutrients upwelling from the deeper waters. Carbonate sands derived from a reef or from plants and animals inhabiting the shelf edge accumulate along a wide belt that follows the break between the shelf edge and the slope. Tidal and storm currents mold the sand belt into tidal channels and bars.

The slope (Figure 2) is dominated by sediment transport seaward from the shelf margin. Fine-grained sediment settles to the bottom forming thin-bedded mudstones, while slumps, debris flows, and turbidity currents form coarse-grained bodies of breccia, conglomerate, and carbonate sand. The resulting facies patterns depend upon the relief of the shelf margin and the nature of the shallow water portion of the margin.[4]

Sediments of the basin environment (Figure 2) are dominated by very fine-grained skeletons of planktonic microorganisms, which when lithified, become chalks. They are found in deep basins as well as on drowned shelves.

Calcium carbonate cementation and compaction are diagenetic processes that are initiated soon after deposition and by which intergranular pore space is progressively reduced producing systematic changes in petrophysical properties (see Evaluating diagenetically complex reservoirs and Reservoir quality). Compaction is a physical/chemical process, while cementation requires fluid flow. Microporosity within grains or between lime mud particles may be retained even though intergranular pore space is lost.

Dolomitization is a diagenetic process that converts limestones to dolostones through a microchemical process of calcium carbonate dissolution and dolomite precipitation. Dolomitization can change the rock fabric and the petrophysical properties significantly because the dolomite crystals are commonly larger than the replaced limestone particles. Dolomite cement systematically grows on the dolomite crystal faces, reducing reservoir quality. Dolomitization requires the addition of large quantities of magnesium through fluid flow.

The most common evaporite mineral found with carbonate rocks is anhydrite and its hydrous form, gypsum. Gypsum is the common form at shallow depths, but it converts to anhydrite at depth in response to higher temperatures. Bedded anhydrite is commonly found in tidal flat environments and is an effective reservoir seal. Diagenetic anhydrite is found in reservoir rocks as nodules and poikilotopic crystals, which have little effect on reservoir properties, and as pore-filling crystals, which reduce reservoir quality.

Dissolution is the diagenetic process by which carbonate and evaporite minerals are dissolved and removed, thus creating and modifying pore space in reservoir rocks (see Reservoir quality). The effect of this process on permeability depends upon the geometry and location of the resulting voids relative to the rock fabric. In some cases, dissolution is fabric selective and results in formation of isolated vugs. In other cases, dissolution enlarges fractures and interparticle pores resulting in large, connected vugs. If the vugs are large enough, the roof may collapse, forming a floor breccia and fractured roof.

Interparticle porosity[7] is defined as that pore space located between grains (intergranular porosity) or between crystals (intercrystalline porosity), but which is not significantly larger than the grains or crystals. Vuggy porosity is defined as pore space larger than or within rock particles. Isolated vugs are called separate vugs, while vugs that form a connected pore system on a reservoir scale are called touching vugs.

In nonvuggy carbonates, permeability and capillary properties are a function of interparticle porosity and particle size. The addition of separate vug porosity to a carbonate reservoir rock increases storage capacity, but has little effect on permeability. Separate vug porosity, however, has a large effect on the Archie m factor used in water saturation calculations from wireline logs and on the acoustic transit time. Touching vug pore systems dominate fluid flow and override the effects of interparticle porosity, particle size, and separate vug porosity.

Since most fields have few cores available, wireline logs must be used to identify rock fabric elements. This requires the calibration of wireline log responses with core data.

Lithology can have a major effect on porosity logs. Gypsum is of particular concern in carbonate reservoirs because it contains large quantities of bound water. The bound water is seen by neutron logs as porosity, resulting in erroneously high porosity indications.

The key to describing the geometry and petrophysical properties of carbonate reservoirs lies in combining sedimentary and diagenetic descriptions, geological models, rock fabric analysis, and petrophysical rock properties. While each hydrocarbon accumulation has a unique geometry, certain combinations of sedimentation, diagenesis, and pore fabric seem to result in a similar distribution of petrophysical rock properties. Four such reservoir models are (1) the upward-shoaling cementation and compaction model, (2) the subtidal-supratidal dolomitization and sulfate emplacement model, (3) the karst-collapse model, and (4) the geological reef model. 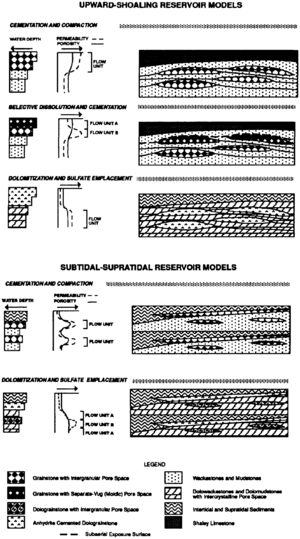 Figure 3 Schematic diagrams of the upward-shoaling cementation and compaction reservoir model and the subtidat-supratidal dolomitlzation and sulfate emplacement reservoir model.

The upward-shoaling model is based on a depositional model of sediment aggrading to sea level. As the water shallows, the energy conditions increase, resulting in a vertically stacked sequence from mudstones and wackestones at the bottom to packstones and grainstones at the top (Figure 3).

Cementation and compaction occur with burial, reducing the reservoir quality of the mud-supported mudstones and wackestones more than the grain-supported packestones and grainstones. The result is a vertical sequence of lower porosity and permeability mud-supported rocks at the base and higher porosity and permeability grain-supported rocks at the top. Consequently, the best quality flow unit occurs at the top of the sequence. The permeable units are confined to the grainstone bars.

If the grainstone bars are exposed to meteoric diagenesis, significant separate vug porosity can develop, causing a loss of permeability while retaining porosity. In the dolomite environment, grainstone bars are commonly cemented with anhydrite, and intercrystalline porosity in mud-supported sediments forms the permeable facies.

The subtidal-supratidal model (Figure 3) is based on the transport of carbonate sediment onto the shore by storm and tidal currents resulting in the progradation of the tidal flat environment over the subtidal environment. Subtidal intervals are commonly composed of mudstones, wackestones, packstones, and grainstones in no predictable order. When present, grain-supported sediments may be concentrated in the upper part of the subtidal section in the form of offshore bars and high-energy shoreface deposits. Intertidal and supratidal sediments are typically muddy except in association with high-energy subtidal sediments. A typical vertical sequence would show intercalated mud- and grain-supported sediments in the subtidal interval overlain by algal mats in the intertidal interval, and mud-cracked and desiccated wackestones and mudstones in the supratidal interval.

The subtidal-supratidal sequence is commonly dolomitized and contains anhydrite and gypsum. In the subtidal interval, dolomitized grainstones retain their intergranular pore space, except where cemented by anhydrite, and form permeable units. Dolomitization of the subtidal mud-supported sediments converts the tight, mud-supported limestones to permeable units because of the larger dolomite crystals and intercrystalline pore space. This produces two types of flow units in the subtidal interval: a dolomud-supported flow unit and a dolograin-supported flow unit. Each will have a unique porosity-permeability transform. 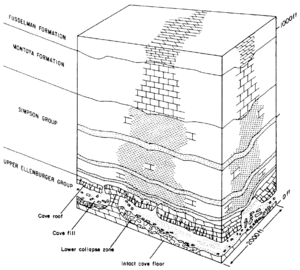 The karst-collapse model describes a touching vug pore system that is formed by massive dissolution of carbonate resulting from meteoric groundwater flow and subsequent collapse and filling of caverns (Figure 4). This process is independent of the sediment's original environment of deposition. Most karsted carbonates are thought to be related to major dissolution concentrated in the vadose and upper phreatic zones producing a horizontality to the caverns. Cavern geometry is also controlled by fracture orientation, often resulting in caverns with linear trends.

The geological reef model is a composite of the upward-shoaling subtidal-supratidal and karst-collapse reservoir models. The difference is that the facies tracts are compressed onto a carbonate shelf of limited areal extent with high relief above the seafloor and with steeply sloping sides. The interior shelf or lagoon facies (Figure 2) located landward of the shelf edge normally contains a high percentage of mud. Grainstones, packstones, and boundstones associated with the reef facies are typically found along the shelf edge.

Compaction and cementation typically destroy the permeability of the lagoonal muds, leaving the grain-dominated sediments and boundstones of the reef edge as reservoir rocks. However, selective leaching, dolomitization, and karsting can significantly alter the permeability patterns, as discussed in previous sections. The reservoir flow units can be very complex due to the numerous possible combinations of depositional and diagenetic events.