This chapter presents an overview of coring tools, including guidelines for selecting coring tools for specific applications. Coring provides the only means of obtaining high quality samples for the direct measurement of rock and reservoir properties. Cores provide both geological and engineering information, and their analysis ultimately leads to a profitable field development.

Many coring systems exist. The system used depends on the objectives for the coring program and on the physical constraints of both the formation and the drilling location. A remote location might require a ready-made core-handling and preservation system such as a disposable inner barrel. An exploration program might profit by employing a wireline core barrel to core and drill alternately without the expense of tripping pipe. A mature field might need a sponge or pressure core to help pin down remaining reserves. These three situations describe three coring programs, each with different objectives and constraints and each with a different “best” way to get the job done.

Designed to recover core from consolidated formations, conventional coring systems consist of an inner core barrel with a core catcher, suspended by a swivel assembly inside of an outer core barrel that is attached to the drill string, and a core bit (Figure 1). As mentioned previously, the final selection of a particular system depends upon the formation, location, and objectives of the coring program.

The core catcher, the device that holds the core in the barrel, is tailored to the type of inner barrel and lithology expected. Table 2 lists core catchers by their common names and usages. In some cases, multiple catchers are used. Friable sandstone interbeddded with shale might require both slip and flapper type catchers. Full-closure catchers, run primarily to ensure success when coring unconsolidated sand, also incorporate split ring or slip type catchers to improve core recovery in the event that coring ends in hard rock.

A heavy duty core barrel should be considered when cutting long lengths of relatively homogeneous formations or when anticipating higher than normal torque loads. This system can also be especially attractive when rig time is the largest component of the coring expense.

The precursor of today's heavy duty core barrels is the marine core barrel. This tool was developed to be stronger than conventional systems for use in offshore settings. The marine barrel increases the margin of safety against tool failure, but is restricted to cutting a 3-in.-diameter core.

Today's special heavy duty core barrels have been developed to core harder than normal formations and to cut extended length cores. These tools are designed to cut cores up to 5.25 in. in diameter. Heavy duty threads allow more torque to be applied to the bit and improve the margin of safety against tool failure.

Disposable inner core barrels have improved both core recovery and core quality. Aluminum or fiberglass inner core barrels can be substituted for conventional steel inner barrels. The most common type of disposable inner core barrel is the fiberglass barrel. The low coefficient of friction of the fiberglass is thought to improve core recovery by reducing the resistance to core entering the barrel. A more quantifiable benefit comes in the form of a ready-made core-handling and core preservation system that can be used in remote locations or with delicate cores. (For example, fractured or unconsolidated core material tends to be kept intact as the inner barrel is laid down and cut into sections for shipping.) Aluminum inner barrels are recommended when high temperatures (>150°F338.706 K
65.556 °C
609.67 °R) are expected. 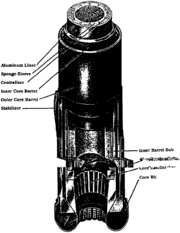 Attempts have been made to use core barrel liners to cut naturally fractured rock. Unfortunately, shards of core often cut into the relatively soft liner material, causing the core barrel to jam.

The sponge-lined coring system was developed to improve the accuracy of core-based oil saturation data. This is very important information to have when evaluating the merits of a secondary or tertiary oil recovery program.

The sponge coring system consists of a conventional core barrel fitted with a series of sponge-lined aluminum inserts (Figure 2). The system cuts a relatively small core, 2.5 or 3.25 in. wide and 30 ft9.144 m
360 in long. The sponge liner catches oil that “bleeds” out of the rock as the core is pulled (tripped) from the hole. The oil-wet sponge holds oil tightly, while allowing water and gas to move through the sponge and out vent holes drilled in the aluminum liner. Sponge and conventional cores may be cut one after another without making special trips to open the hole, so it is possible to “spot” a sponge core and still acquire larger diameter cores for other analyses.

The difference between full-closure and other coring systems is that the core catcher is not exposed during coring. This allows the inner core barrel to slip over the soft core with a minimum of disturbance. After coring, a ball is pumped downhole activating the core catcher and sealing off the bottom of the barrel (Figure 3).

The hidden core catcher is both the major asset and major liability of this coring system. Since the core catcher is not exposed during coring, coming off bottom is likely to result in lost core. If the catcher is not activated after coring, the core will be lost during tripping. Against these risks, the benefits are a longer length and larger diameter core than is possible with a rubber sleeve core barrel and a less disturbed core than one cut with a conventional coring system.

Pressure core barrels are sophisticated tools requiring an on-site facility to service the barrel and handle the pressurized cores. Core handling includes displacing the drilling fluid from the inner core barrel with a nonfreezing gel and then freezing the entire inner barrel assembly in dry ice.

When planning a pressure coring operation, it is important to acknowledge that flushing ahead of the coring bit may take place. Thus, one should minimize overbalance, use a low fluid loss drilling fluid, and when possible, employ the new low-invasion coring bit technology to reduce core flushing.

The wireline core barrel allows drilling or coring without pulling the drill string. This reduces drilling costs by eliminating the need to trip pipe. The maximum size of a wireline core is 30 ft9.144 m
360 in long and 2.75 in. wide. The most commonly used tools produce a 2.36-in.-diameter core. For applications in which small diameter samples are adequate, this is a cost effective method.

The wireline core barrel is designed so that the inner core barrel and bearing assembly can be dropped through the drill string, locked in place for coring, and retrieved by wireline. Sequential cores may be cut or a diamond drilling plug can be dropped into place to drill ahead. The drilling plug may also be retrieved by wireline for inspection or to resume coring. During planning, it is important to check that the inner diameter of the drill pipe is large enough to allow the tool to pass through.