From AAPG Wiki
(Redirected from Conversion of well log data to subsurface stratigraphic and structural information)
Jump to: navigation, search

Conversion of log depths to positions with respect to the surface location of a well is the first step in arriving at a consistent representation of structural or stratigraphic data for a field in a three-dimensional grid. This is particularly important in deviated wells where measured depth and thickness can differ significantly from the vertical depth and stratigraphic thickness.

Measured depth (MDmeasured depth), or drilled to depth (DDdrilled deeper), is the depth measured (by driller or logger) to any feature of a well, whether a casing point, a sidewall core, or a significant geological marker. To use this depth in interpreting geological structure, the depth must be corrected to subsea depth or ground elevation (or rig floor or kelly bushing elevation) using information commonly found on log headers. For example, drilled depth minus kelly bushing elevation equals subsea elevation.

The true vertical depth (TVDtrue vertical depth) of a point within a well is the depth to that point measured on a line connecting the point to the center of the earth. It may be derived from the measured depth by correcting for the deviation of the well. Critically important to an understanding of the three-dimensional path of a well are the following facts:

As a consequence, location of the position of any point in a well must be calculated using data from well surveys and an additive formula.

For a simple case (Figure 3), in which the well course is approximated as a series of straight line segments parallel to the individual survey measurements, the formula is as follows:

The intervals can be defined in several ways depending on the accuracy and simplicity of calculation required. The tangential or terminal angle method (Figure 4a) assumes a constant deviation for the entire interval from one survey point to the next. Thus, the measured depths (MDmeasured depthi, MDmeasured depthi–1) for each interval coincide with the depth at the survey points, and the angle used would be for the lower survey point. Although easy to calculate, this method is likely to be substantially in error and is generally not recommended.[1][3] It is mentioned here for historical reasons, as it has been widely used. Alternatively, the angle averaging method (Figure 4b) uses the average for the two survey points at either end of the segment.

A better approximation, the balanced tangential method (Figure 4c), is derived by placing the interval depths (MDmeasured depthi, MDmeasured depthi–1) half way between the individual survey points, thus assuming that the deviation is constant in an interval around the measured point.

The minimum curvature method approximates the well path as a single circular arc. The equations in this method (from Dailey[1] and Inglis[3]) are as follows:

These methods are especially useful when the deviation angle is built or decreased rapidly with respect to the survey interval.

Table 1 shows values for the percentage difference between measured depth and true vertical depth for varying degrees of deviation, and for the horizontal displacement (also as a percentage of measured depth) for a well segment of constant deviation. For most map and cross section scales, depth corrections for wells deviated less than 3′ are almost undetectable. For wells deviated by a larger number of degrees, large depth and horizontal displacement deviations could lead to substantial misplacements of a geological marker and the consequent distortion of structural and stratigraphic relationships. 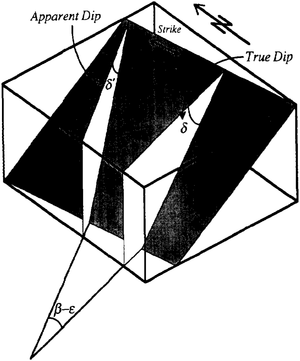 Figure 6 Relationship between true dip of a planar surface and apparent dip of that surface in a plane at an angle of ε to the dip direction.

In this equation, δ′ indicates the apparent dip of the bed in the direction of the horizontal displacement (Figure 6), which is written as

If the well is straight (no change in deviation) for the length of the interval of interest, this formula reduces to 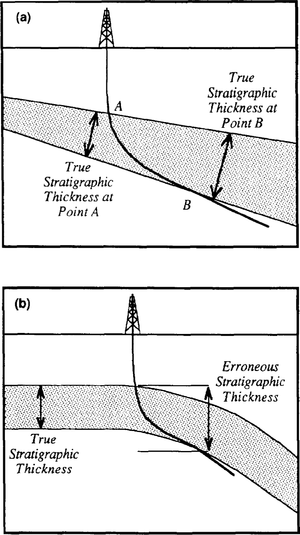 An assumption made here is that the dip of the top and bottom surfaces is essentially the same. The more closely the wellbore direction approximates the dip direction, the more sensitive the thickness calculation will be to stratigraphic thickness changes (see Figure 7a). The assumption is also violated if the well traverses a zone of strong curvature in the rock such that dip changes rapidly (Figure 7b). Such changes can be corrected for if sufficient data are available, but are commonly too small to be of significance.