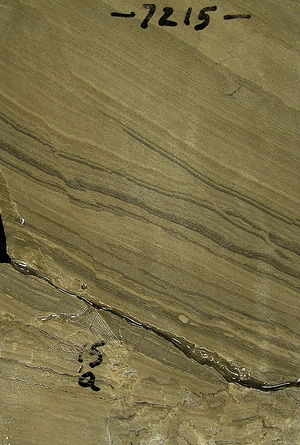 Careful examination and recording of information from continuous cores provide critical data for stratigraphic correlation, environmental interpretation, and wireline log calibration. Core plugs provide samples for analysis of porosity, permeability, fluid saturation, and a host of compositional and textural studies. Recommendations for the well site and laboratory handling of cores as well as sedimentological analyses are described by Siemers et al.[2] and Miall.[3]

Continuous cores have some advantages over outcrop exposures for environmental interpretation.[4] These advantages include the following:

These advantages, however, are offset by the lack of a three-dimensional view and the inability to observe lateral facies changes and large-scale sedimentary features directly. 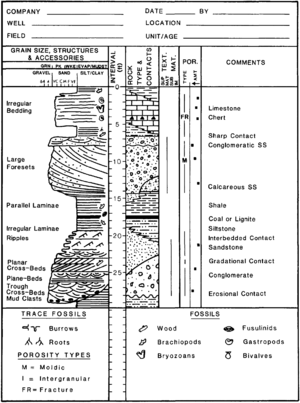 Figure 1 Idealized graphic log. Explanation for some symbols used for sedimentary structures, lithologies, fossils, and contacts are given. Grain size of sillclclastic rocks and Dunham's[5] classification of limestones are indicated in the column on the left. All sedimentary structures are depicted graphically as accurately as possible. Porosity amounts in percent can be scaled as needed. (Modified from Casey.[6][7].)

A graphic log format, which visually expresses a stratigraphic succession, is strongly recommended for describing continuous cores. Such logs should reflect the following:

Recommended formats for graphic logging are given by Bebout and Loucks[8] and Boyles et al.[7] A completed graphic log is shown in Figure 1. Grain size, sedimentary structures, and accessories are shown in the left column. Let's look at how each type of data is handled in the graphic log.

Terrigenous clastic grain sizes and carbonate rock types are recorded as a continuous vertical curve reflecting changes in depositional energy. Note that grain size increases to the left, as is inferred in the case of spontaneous potential (SP) and gamma ray curves. Grain size is determined by comparison with a chart made of sized sedimentary material or a visual pattern such as that produced by Amstrat. A good qualify handlens or reflecting light binocular microscope are essential for accurate grain size determination.

Fossils, trace fossils, diagenetic and structural features, and other accessories are shown on the far right side of the left column of a graphic log. Standard symbols for these features are found in Swanson[9] and Bebout and Loucks.[8]

Dominant lithologies and the nature of the contact between lithologic units are recorded in the “Rock Type and Contacts” column near the middle of a graphic log (Figure 1). Standardized symbols for illustrating lithologies are available and are presented by Tucker[12] and Lindholm.[11] If more than one lithology or interbedded lithologies exist within an interval, lithologies should be logged by estimating the percent volume of each lithology and noting the terrigenous clastic lithologies to the left of the chemical rocks. Contacts between lithologies are recognized in core as gradational, interbedded, or sharp. Some sharp contacts are probably erosional and may represent unconformity surfaces. Additional information such as the presence of root structures and early diagenetic cements may aid in determining the true nature of sharp contacts. 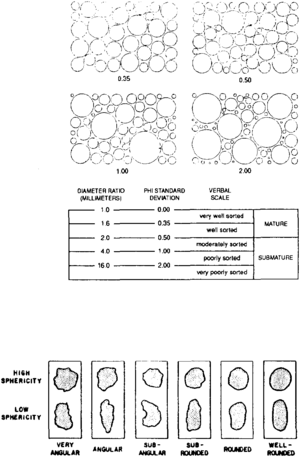 Textural maturity of sandstone units is recorded in the next column to the right (“Textural Maturity” in Figure 1) and is described following the method outlined by Folk.[15] Detrital clay (matrix) content and the sorting and roundness of grains are all considered in the determination of textural maturity. Because it is difficult to estimate the relative abundance of detrital versus authigenic clay without thin section or scanning electron microscope data, care must be taken in making estimates of detrital clay content. Image charts can be used for estimating sorting and roundness (Figure 2).

Identification of porosity type and a qualitative estimate of porosity abundance should be made in the column labeled “Porosity.” For carbonate rocks, the porosity classification scheme discussed by Choquette and Pray[16] is recommended. For siliciclastic rocks, four types of porosity are common:

Of these, microporosity is the most difficult to recognize with a binocular microscope. The existence of microporosity is suggested by the presence of detrital or authigenic clays in sandstones. Accurate laboratory or thin section determinations of porosity types and percentages should always augment the estimates made during core logging. (For more on porosity classification schemes, see Porosity.)

Information not recorded elsewhere on the form can be included in the “Comments” column on the far right (Figure 1). Such items as color, presence of hydrocarbon residue, and inferred depositional environment can be placed here. Color should be determined using the standard color chart distributed by the Geological Society of America.[18]

In most basins, few intervals in only a small number of wells are cored. Thus, calibrating of rock information (from continuous cores, closely spaced sidewall cores, or cuttings) to wireline log responses is essential to interpretation of depositional environments from logs alone. (For details of correlating cores to logs, see Preprocessing of logging data and Core-log transformations and porosity-permeability relationships. For information on interpreting depositional environments from logs, see Lithology from logs.)