Selecting the correct seismic display is vital to realizing the maximum potential for geological interpretation. The seismic trace contains much information that can be associated with changes in rock properties in the subsurface. Lithology, porosity, pore fluid, and a host of other variations are often detectable in the seismic response but can easily be masked by an improper display.

The time to think about display needs is at the outset of processing. The processor should be aware of the type of anomaly you are trying to discern, such as porosity, gas zone, or facies changes. This allows the correct selection of a data processing flow and display of the desired information.

In exploration seismology, reflections are recorded from velocity or density contrasts in the rock sequence. By SEG convention, an increase in velocity, such as from a slow velocity shale to a high velocity dolomite, is recorded and processed in such a way as to be displayed as a positive peak and is said to have a positive coefficient of reflection. If the rocks were reversed (that is, travel is from a high velocity rock to a slower velocity rock), the coefficient of reflection is said to be negative and is displayed as a trough. When this convention is followed, the display is called normal or positive polarity. Sometimes it is desirable to reverse the display convention. Then the display is said to be reverse or negative polarity.

In most structural plays, normal polarity would be the appropriate way to display data. However, when using lines recorded with different energy sources, it may be handy to have a normal and reverse section when you try to tie different data sets. Also, in stratigraphic work, it may be helpful to determine which polarity best fits your well ties, then work with that polarity. Occasionally, neither polarity seems to fit. When this happens, you may want to discuss the problem with the data processor who may be able to adjust the phase of the data to better fit the well or existing seismic data. This process is called phase shifting. 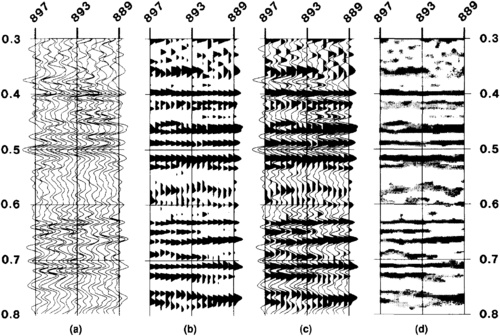 The variable area wiggle trace is the commonly accepted work horse in the petroleum exploration field. Each trace displays the data associated with its common depth point as a continuous trace oscillating on either side of a zero amplitude line (Figure 1a). Commonly, the area of the curve (trace or “wiggle”) to the right of the zero line (positive or normal amplitude) is shaded black, while the negative side to the left is unfilled (Figure 1b). The shading need not start at zero, but the area to be shaded (either positive or negative) may be selected to enhance the visual display of the amplitudes desired. This shading of part of the area of the curve gives the display its name variable area wiggle trace (Figure 1c). The term bias is used to describe the type and amount of shading desired. Zero (0) bias means all positive amplitudes are shaded. A 25% positive bias means the shading is offset by 25% of maximum amplitude from the zero line. A negative bias tends to shade in more of the negative values. Another factor is the choice of the trace deflection or excursion. A 2.5 excursion allows the maximum amplitude of the trace to cross over 2.5 trace spacings. This greatly affects the look of the data.

Color amplitude display is a variation on variable density in which color is substituted for shading. The use of many colors allows for increased amplitude resolution. Color presentation often more easily identifies geological changes in vertical and lateral stratigraphic sequences. A display of a variation in amplitude, phase, frequency, velocity, or any other trace-related attribute can be represented by different colors or shades of gray to black. These displays are very useful in stratigraphic studies and for detection of lateral variation in facies. The color band or shades of gray is your choice, limited only by machine capability.

Squash plots are a very simple and sometimes effective method of enhancing the visibility of an event within a data set. These plots can be accomplished by several methods. The traces in the display can be moved closer together and allowed to overlap, or more commonly, adjacent traces are added together (trace mix). The number of traces summed and the mode of weighting should be determined from the structural and stratigraphic setting. Care must be taken, as a large number of trace sums in an area of steep dips may distort the picture and render undesirable results.

At display time, scaling and filtering parameters must be selected. Energy decays very rapidly as it penetrates the earth and is reflected back to a receiver. If the energy reflected from the deeper horizons were displayed with the same amplitude scale as that from the near surface, peaks and troughs from deeper events would be invisible to the eye. Automatic gain control (AGO is a method to normalize all amplitudes in a trace by looking at time windows over that trace and adjusting the amplitude of events within the window relative to a chosen standard).

The choice of the design windows for the AGC affects the display. If the window is very short in time, the program tends to raise all amplitudes to the standard and very little differentiation between events is preserved. Generally, a window of about 250 msec is a good place to start. As the gate becomes longer, more of the original amplitude relationships are preserved. A single window trace equalization is sometimes desirable in processing data intended for relative amplitude studies, while a fast (short) AGC could be helpful in data having poor signal to noise ratio.

Another method of gaining the section is programmed gain control. This method applies a predetermined gain function to the trace and is most commonly encountered in field displays.

Filtering, that is, limiting the frequency content of the display, is an important aspect of the final display. A certain amount of filtering is done during the processing sequence to enhance the signal to noise ratio. At display time, one has a final opportunity to choose the frequency band that highlights the seismic target best. This highly subjective decision is usually made by testing several ranges and then choosing the one that works for that particular play. Usually the useful band width for the shallow section is much greater than for the deep section. Noise content may also vary with time and position along the line. A wide variety of constant or time/distance varying filter techniques is available.

Frequently, the noise degrading the signal may be very similar to the signal in dip, frequency, and other properties. At this point, you may have to choose how much signal you are willing to give up to reduce or eliminate the noise.