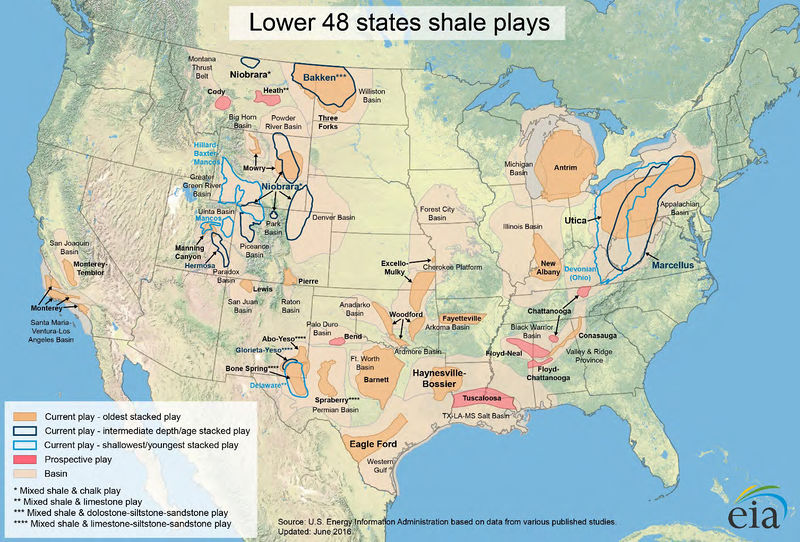 Shale gas and liquids have been the focus of extensive drilling for the past 14+ years owing to improved engineering, recovery and abundance of reservoir. Although there is international interest in exploiting hydrocarbons from these unconventional reservoirs, with active exploration projects on most continents, much of the successful exploitation from shales continues to be in North America (Figure 1), particularly in the United States but increasingly so in Canada and South America. While shale-gas production has been declining from 2014-16 some areas saw a revival (e.g., Haynesville Shale) due to LNG facilities being built along the East Coast of the USA. Since the downturn in 2016, shale-gas production has increased to 66Bcf/day through early 2019 (Fig. 2; EIA, 2019) mainly fueled due to increased production in the Marcellus and Permian Basin. New plays in shale liquids contributed to a reversal in oil production after a general decline over the last 20 years (e.g., Permian Basin, Eagle Ford). Shale-oil production remained strong at approximately 7.4 million barrels per day due to improvements in drilling techniques, however daily production is forecasted to increase only in the Permian Basin in 2019 (EIA May, 2019).

Overall, Europe remains relatively unexplored as compared to North America and many parts of Asia remain relatively unexplored for unconventional shale gas and oil, but interest in these plays is certainly high. South America’s potential as unconventional shale gas and oil province is currently assessed in Argentina, but exploration and exploitation of these reservoirs and infrastructure are still in the development stages.

The following report provides the reader with information about many shale systems in North America that are actively being exploited for contained hydrocarbons as well as an overview of activities in China and Europe.

It is a pleasure to submit the Annual Report from the EMD Shale Gas and Liquids Committee looking back to the years 2017/2018. This report contains information about specific shales with recent activities in the U.S., Canada, Europe, and China. Given the intense interest in shales as “unconventional” hydrocarbon reservoirs, this report contains information available at the time of its compilation, and the reader is advised to use links provided herein to remain as up-to-date as possible.

This report is organized so that the reader can examine contributions from members of the EMD Shale Gas and Liquids Committee on various shales in the United States (presented in alphabetical order by shale name or region; Figure 1, Canada, China, and Europe. Additional sections of the report include valuable links, additional sources of information, and the Gas Shales and Shale Oil Calendar for 2019/2020.

The following shale system sub-reports are listed and linked respectively below in alphabetical order: