Conventional recovery methods (primary and secondary) typically extract approximately one-third of the original oil-in-place in a reservoir. Estimates (made in the late 1970s) of worldwide oil in-place range up to 1.5 trillion barrels; using that figure, it is estimated that the oil remaining as a residual oil saturation after conventional recovery would be approximately 1.0 trillion barrels.[1] Several enhanced oil recovery (EOR) techniques—generally grouped together as tertiary production schemes—have targeted this huge unexploited reserve.

All EOR projects begin with an analysis of the nature, location, and causes of residual oil saturations (Sor) that remain after primary and/or secondary recovery operations. The main factors that control the value of Sor are pore geometry, rock wettability, and the properties of the displaced (oil) and displacing (injected) fluids. Fluid properties of particular interest are interfacial tension, viscosity, and density. In combination with the heterogeneity of the reservoir, these properties result in the overall recovery (ER) for any recovery scheme.

The overall recovery is the product of displacement efficiency (ED), and sweep efficiency (ES). The displacement efficiency is inversely proportional to the residual oil saturation, while the sweep efficiency is inversely proportional to the mobility ratio (M) between the injected fluids and the oil in place (see “Waterflooding”). M is usually stated in terms of the Relative permeability of a fluid phase (kr) divided by the phase's viscosity (μ) relative to the same ratio for the other phase, such as for a waterflood:

In simplest terms, the pursuit of incremental oil recovery for EOR reduces to selecting the process that minimizes M or Sor for a particular reservoir. The choice of process to be used is also dependent on other considerations such as depth, temperature, and amount of oil remaining in place prior to EOR. Unfortunately, the implementation of all current EOR processes involve factors that can both increase and decrease M. For example, a miscible gas flood decreases M by increasing the permeability of oil relative to the injected gas through the elimination of interfacial tension, but at the same time, the low gas viscosity relative to oil results in an increase in M.

Much of the design phase of an EOR project is spent in the search for the combination of processes and injection schemes that will maximize oil recovery relative to the cost of implementing the particular process. Specifically, the phases in designing an EOR project include the following:

It is possible to skip many of these steps by using reservoir engineering analogy when neighboring reservoirs that have undergone EOR have properties similar to the reservoir in question. In addition, field trials are often not attempted due to the length of time they require and the difficulty in selecting a portion of a reservoir to study that is representative of the reservoir as a whole. 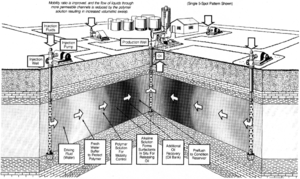 The basic purposes of chemical flooding are to add a material (chemical) to the water being injected into a reservoir to increase the oil recovery by (1) increasing the water viscosity (polymer floods), (2) decreasing the relative permeability to water (cross-linked polymer floods), or (3) increasing the relative permeability to oil and decreasing Sor by decreasing the interfacial tension between the oil and water phases (micellar and alkaline floods). The process is depicted schematically in Figure 1. Chemical additives to reduce interfacial tension are detergent type compounds such as petroleum sulfinates and are so expensive that chemical floods are often technical successes and economic failures. Successful design of chemical floods always revolves around minimizing the amount of chemicals needed to achieve the desired change in interfacial tension and/or mobility ratio.[2] 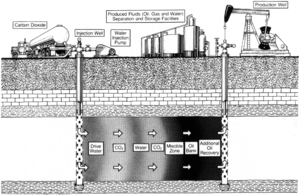 The concept behind miscible flooding, such as carbon dioxide floods, is that the best way to eliminate the interfacial tension between the in-place oil and injected fluids is to inject a solvent for that oil (a solvent being a material that is miscible in all proportions with the dissolved material). The residual oil saturation to displacement by a solvent would be 0.0. In practice, a solvent must be found that is miscible with the oil and costs no more than the oil. Finally, the volumetric sweep efficiency of the process must be high enough to make this scheme economical. Because the relative permeability effects have been removed by the miscible nature of the displacment, the sweep efficiency is primarily a function of the viscosity of the solvent relative to the viscosity of the oil.[3]

Current applications of miscible flooding have concentrated on carbon dioxide (CO2), hydrocarbon gas, and nitrogen injection processes. The gas solvents tend to be much less viscous than reservoir oils so that the sweep efficiencies are often very low for miscible gas floods. Design efforts center around finding methods to improve this volumetric sweep efficiency. In the case of carbon dioxide floods, the gas is injected into the reservoir in small slugs that are alternated with water slugs as a means of lowering the mobility of the injected fluid (Figure 2).

Secondary benefits of miscible gas injection include the effects of the solubility of the solvent in the oil phase. As the carbon dioxide, hydrocarbon gas, or nitrogen dissolve in the oil phase, the oil is swelled and its viscosity lowered. Both of these phenomena add to the mobility of the oil relative to the injected solvent. In practice, although miscible displacement implies no residual oil saturation in the area swept by the solvent, a small residual saturation is left due to economic considerations of producing at high GORs and the phase behavior of the system prior to the attainment of miscibility in the reservoir. 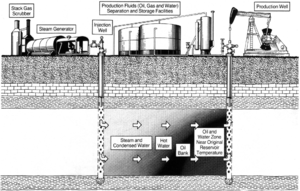 Figure 3 Schematic diagram of steam flooding. In this method, heat reduces the viscosity of oil and increases its mobility. © U.S. Department of Energy, Bartlesville, Oklahoma. 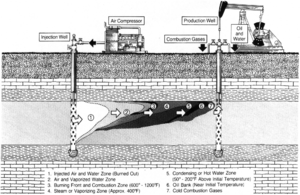 Figure 4 Schematic diagram of in situ combustion. The mobility of oil is increased by reduced viscosity caused by heat and solution of combustion gases. © U.S. Department of Energy, Bartlesville, Oklahoma.

All thermal recovery processes involve the use of heat to accelerate the oil recovery process. The heat can be generated at the surface and injected into the reservoir, as in the case of steam injection (Figure 3), or generated in the reservoir by injecting a fluid such as air that is combustible with the in-place oil (Figure 4). The choice of which technique to use to add thermal energy to the reservoir depends on an analysis of the oil reservoir and the economics of generating the energy. However, a major goal of all thermal methods is to reduce the viscosity of the in-place oil. For most thermal processes, this is accomplished by heating a very heavy oil (API gravity).

In a thermal flood, much effort is devoted to treating the boiler water and the stack gases resulting from the burning of produced oil or gas to generate heat. Because of environmental considerations, this usually limits the technique to unpopulated areas.

Thermal recovery techniques have been the most successful of the techniques implemented to date. This is because the remaining oil saturation prior to a thermal flood is usually high so that the EOR target is large. The choice of hot water injection, continuous steam injection, cyclic steam injection, or in situ combustion is dependent on the depth of the reservoir, the thermal properties of the surrounding formations, and the fluid properties of the in-place oil. Therefore, the design phase of a thermal project typically concentrates on determining how fast energy can be transferred to the reservoir by the process being considered and the cost of producing that thermal energy.