Factors that cause migration

Hydrocarbons migrate from a position of higher potential energy to one of lower potential energy. The spatial location of these energy differences defines the expected migration path. There are many sources for this energy that causes oil and gas migration.

Three factors primarily cause hydrocarbon migration. All may be active at the same time during the migration process. Each factor produces energy from one or more sources. The table below lists these factors and their corresponding energy sources.

Volume increase due to maturation

As maturation proceeds, solid kerogen is converted to liquid and gaseous hydrocarbons. When the activation energy levels of the kerogen are exceeded, this conversion is very rapid. The change in phase is accompanied by an increase in volume, preferentially over-pressuring the pore system within the source-rock unit and resulting in flow from the source-rock unit into the surrounding formations. This factor is of prime importance in source rocks.

A free hydrocarbon phase rises in a water column because its density is less than that of water. This buoyancy force is proportional to the density difference and the height of the hydrocarbon column. It acts vertically. When the rising hydrocarbons encounter a low-permeability (high capillary entry pressure) sloping surface, they are deflected updip and the resultant force is decreased by an amount proportional to the slope of that surface.

Temperature and pressure effects on buoyancy 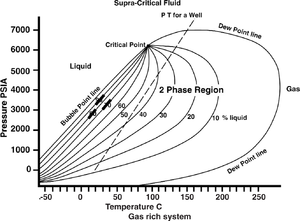 Figure 1 summarizes the competing effects of pressure and temperature changes for a typical volatile oil. 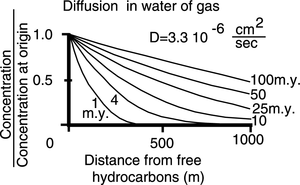 Figure 2 Diffusion of gas in water as a function of concentration at origin and distance from origin. After Klimenko.[2] Copyright: AGI.

Diffusive forces spontaneously transfer hydrocarbons dissolved in water from areas of higher concentration to adjacent areas of lower concentration. The kilometers-long diffusion gradients of benzene and toluene within reservoirs demonstrate the effectiveness of this process. However, the lack of significant transport of benzene and toluene through barriers or seals indicates diffusion and active aqueous solution transport are minor mechanisms of the accumulation process. Figure 2 shows the diffusion of gas in water as a function of concentration at origin and distance from origin (free hydrocarbons).

Burial results in the downward motion of each sediment package and is accompanied by a decrease in porosity as it compacts. The resultant motion of water is continually upward with respect to the sediment. The water motion with respect to the sediment/water interface, however, is downward because some water is continually trapped as sedimentation continues. In order for compaction-driven fluids to escape the sediment/water interface, they must move laterally into areas of concentrated upward flow.