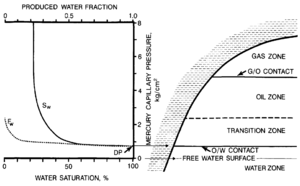 Figure 1 Contact definitions and relationship of contacts in a pool (right) to reservoir capillary pressure and fluid production curves (left). The free water surface is the highest elevation with the same oil and water pressure (zero capillary pressure). The oil-water contact corresponds to the displacement pressure (DPdrill pipe) on the capillary pressure curve. The transition zone is the interval with co-production of water and hydrocarbons. The fraction of co-produced water is shown by the dashed line on the left. The gas-oil contact is controlled by the volume of gas in the trap, not the capillary properties. 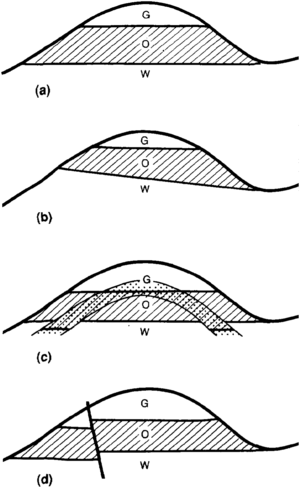 Situations can usually be distinguished because they are associated with different geological settings and result in different fluid contact characteristics (Table 2). 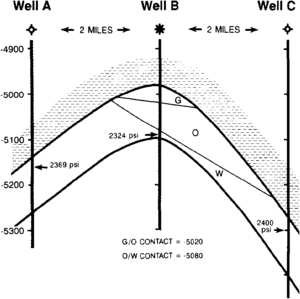 A common type of nonhorizontal oil-water contact is tilting in response to hydrodynamics, the movement of water in the reservoir interval. Hydrodynamic conditions that affect fluid contacts are usually associated with active meteoric aquifers at relatively shallow depths. Indications of active meteoric flow include low salinity water, high topographic relief, and proximity to recharge areas.

If purely hydrodynamic in origin, the fluid contact tilt can be extrapolated across the field as a flat plane that intersects the contact elevation in a minimum of three control wells. Regional fluid pressure data can be used to extrapolate the fluid contacts from the contacts measured in one or two wells. Only corrected shut-in pressures unaffected by nearby production should be used for this evaluation.

Hydrodynamic potential (h) is usually measured as the elevation to which water would rise in an open borehole, called the potentiometric elevation. It is calculated from the reservoir pressure by the following relationship (Equation 1):

where ρh = density of the hydrocarbon.

Because the density difference between gas and water is greater than that between oil and water, the dips of gas-oil and gas-water contacts are the same and always less than those of oil-water contacts responding to the same hydrodynamic gradient. The dip direction is the same for all fluid contacts.

The potentiometric gradient is approximately constant along the section at 17 ft/mi. Calculating the contact dip from Equation (2), we have

The fluid contacts are graphically projected away from well B at the calculated dips to determine the contact elevations along the cross section.

Figure 4 Effect of reservoir heterogeneity on fluid contacts. (a) Capillary pressure curves for facies A and B within the reservoir. The dashed line corresponds to the saturation trend of the well In part (b). Sharp changes in saturation correspond to elevations of facies changes. (b) Oil-water contact corresponding to capillary pressure curves. The free water surface (fw) is the same for all facies, but the different displacement pressure results in different oil-water contact elevations (thick arrows). The transition zones will also have different thicknesses due to different relative permeability characteristics not shown here. The vertical line is the well position corresponding to the saturation profile shown in part (a). 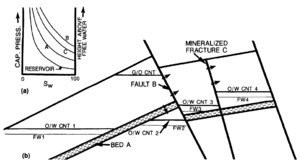 Reservoir rocks may have substantially different pore structures in different parts of a field. These heterogeneities may result in significant variations in hydrocarbon-water contacts, especially in low-permeability reservoirs (Figure 4). Where all reservoir facies are very porous, heterogeneity of depositional environments does not significantly affect fluid contact elevation.

Fluid contact elevations in different control wells can be empirically related to lithofacies at the contact. Where critical lithofacies are not penetrated at the fluid contact, the contact elevation of the lithofacies can be predicted from capillary pressure and relative permeability tests. The greater the difference in capillary pressure and relative permeability behavior for different lithologies within a reservoir, the greater the potential for fluid contact differences caused by heterogeneity. Because surface tension between oil and gas is usually low in subsurface reservoirs,[4] the effect of reservoir heterogeneity on oil-gas contacts is usually small.