From AAPG Wiki
(Redirected from Fundamentals of fluid flow)
Jump to: navigation, search

Well flow calculations focus essentially on two aspects of fluid flow: pressure profile along the flow path and the rate versus pressure relationship at key points of interest (nodes), as illustrated in Figure 1. The main parameters of interest (all in units of psia) are

The corresponding rates are

The relationship between the production flow rate measured at the stock tank, qo, and the bottomhole flowing pressure, pwf, is called the inflow performance relationship (1PR). The IPR of a well can be determined directly by production test data, or it can be predicted from reservoir data. Whether presented graphically or expressed by a formula, the IPR is a statement of the production capacity and is widely used to design and analyze the production performance of wells

Good general references on flow in reservoirs and wells include Golan and Whitson,[1] Bradley,[2] and Craft et al.[3] 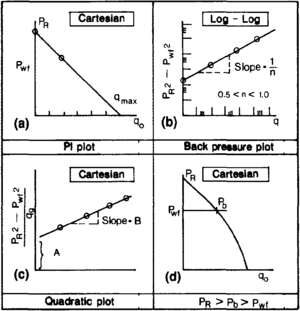 Several IPR formulas have been developed to represent the inflow behavior of various types of wells. Matching a formula to multi-rate production data (Figure 2) allows determination of the value of the characteristic constants in the equations, which in turn characterize the productivity of the well. The empirical formulas are the primary tools to quantify well productivity and to perform production calculations.

The production rate in undersaturated oil wells is linearly proportional to the drawdown, and the IPR is a straight line (Figure 2a). The equation is

The characteristic constant relating the oil rate to the drawdown is called the productivity index, f, and is defined as

Back pressure equations for saturated oil and gas wells

The equation for oil and gas wells is

It has two characteristic constants: the back pressure constant, c, and the back pressure exponent, n. The exponent n is a dimensionless number between 0.5 and 1.0. It approaches 1.0 for low rate wells and 0.5 for very high rate wells. Values of n and c can be determined graphically from a log-log plot of multiple rate test data in the form of (pR2 – pwf2) versus q (Figure 2b). The data point can be fitted to a straight line whose slope is 1/n.

For saturated oil and gas wells, the equation is

The characteristic constants A and B are the corresponding slope and the intercept of the straight line obtained from a Cartesian plot of the multiple rate test data (Figure 2c) in the following form:

For wells producing below bubblepoint pressure, pb while the reservoir pressure is above the bubblepoint (pwfbp

R), the IPR assumes the shape shown in Figure 2d. It can be represented by the following equations:

Darcy's law, which was originally developed for water flow, has been extended to describe flow of hydrocarbon reservoir fluids (compressible and multiple phases).

For single-phase oil flow, the proportional constant that relates flow rates to pressure differences in the original Darcy's law is broken down into two independent factors: rock permeability, k, and fluid viscosity, μ For a linear flow system, this gives 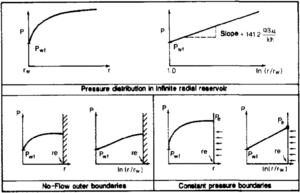 Darcy's law can be applied to an ideal well model producing a constant steady-state production rate. The model assumes cylindrical flow in the reservoir where flow across the formation is horizontal and fluid moves radially toward the wellbore. It also assumes constant pay zone thickness, constant isotropic permeability, and an ideal liquid (homogeneous incompressible liquid in which viscosity is pressure independent).

For infinite size reservoirs, the result is

or in field units,

That is, for every radius r there is a corresponding pressure p that increases logarithmically with r (Figure 4).

Pressure distribution in radial bounded reservoirs is similar to the infinite case for the most of the drainage volume. It is different, however, near the boundaries, as shown in Figure 4.

The practical field system is widely used for practical petroleum engineering calculations. It is a hybrid system that consists of various metric, English, and oil field units. It uses the millidarcy (md) for permeability. Other dimensions and units in this system are as follows:

The formulas in the following section are in practical field units. 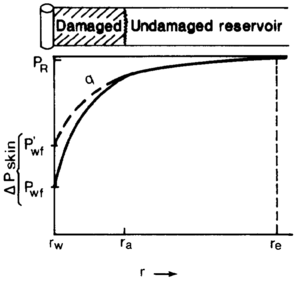 The most important phenomena are usually flow convergence due to limited penetration of the pay zone (partial penetration), impaired permeability adjacent to the wellbore (formation damage), and flow restrictions in the perforations.

It is convenience to express Δpskin as a dimensionless quantity, s, called the skin factor, which is linearly proportional to Δpskin:

This equation is in harmony with the empirical IPR equation for single-phase oil, where

Expansion of the ideal well model

The theoretically derived IPR equations can be expanded to include the production of gas and saturated oil. For low pressure gas reservoirs (below 2000 psia), the following equation is used:

All the other parameters have the same units as the oil flow equations. There are rigorous methods used to express IPR of gas wells at reservoir pressures higher than 2000 psia. However, the low pressure equation is good for most well productivity calculations.

For saturated oil (simultaneous oil and gas flow), the equation used is

where the term kro/μoBo is evaluated at average reservoir pressure, pR, and saturation conditions.

There are two practical considerations to keep in mind when using these equations. First, depending on well spacing, the value of ln (re/rw) is in the range of 6.5 to 8. A value of 7 is a good approximation in most productivity calculations. Second, the skin factor, s, is positive when the entry to the wellbore is restricted by the skin effect. It is negative if the productivity is better than predicted by the ideal radial model (for example, in stimulated or fractured wells).

For the particular case of a solution gas drive reservoir, there is an IPR formula derived by fitting an equation to the results from computer simulations performed for a wide variety of wells with a wide range of reservoir parameters. The formula given in normalized form is

This formula is useful for low rate oil wells. It overestimates the productivity of high rate wells (those producing more than 2000 STBstock tank barrels/day).

A well in a solution gas drive reservoir has a reservoir pressure of 4000 psia. A single test point is qo = 200 STBstock tank barrels/day with pwf = 3220 psia. Substituting the data in the IPR equation and solving for qmax gives

Substituting the calculated qmax and the given pR in the equation calculates points on the IPR, as follows:

Effect of depletion on IPR formulas

Depletion usually results in deterioration of the IPR (Figure 6). These changes can be predicted quantitatively by calculating the changes of the characteristic constants: j, c, qaxA, and B. The exponent n does not change with depletion. If subscript p denotes the present depletion state and subscript f a future state, the present and future characteristic factors are related as follows:

Additional reservoir data are as follows:

At a future stage where pR = 3520 psia, the maximum rate will be

Assuming that n does not change with depletion, the new IPR equation at pR = 3520 psia is

Effect of stimulation and damage on IPR equations

Stimulating a well and reducing its skin factor improve the IPR of a well (Figure 7). Using the subscript 1 to denote a prestimulation or preservice state and the subscript 2 to denote a new post-treatment state, we see the characteristic parameters in IPR equation change with changing skin factor as follows: