The term reservoir heterogeneity is used here to describe the geological complexity of a reservoir and the relationship of that complexity to the flow of fluids through it.[1]

Reservoirs are inherently heterogeneous assemblages of depositional facies and subfacies (for more information, see Clastic lithofacies and Carbonate lithofacies), each with characteristic and commonly differing sediment textures, stratification types, and bedding architectures. Variability is compounded by postdepositional alterations of the strata, such as through compaction, cementation, and tectonic deformation. Geological heterogeneities have been classified in a variety of ways according to their size or scale; the common categories, used here, are wellbore, interwell, and fieldwide scales of heterogeneity (Figure 1). 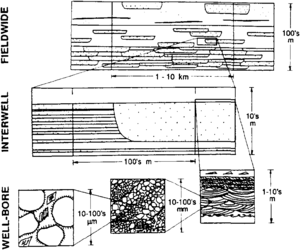 Elements of wellbore heterogeneities include the pore network (pores and pore throats), grain size and composition, grain packing, lamination and bedding styles, sedimentary structures, lithofacies, and vertical stratification sequences. These properties can be readily described in a numerical or quantitative fashion because of the usual availability of rock samples and well logs. Rock cores provide the best information on lithofacies and stratification sequences, plug or whole core porosity, permeability, and fluid saturation (if oil-based drilling mud was used during coring). The use of log shapes for facies recognition, as well as sidewall samples, micrologs, and dipmeter tools can also provide indirect information on lithofacies and stratification types. (For more on lithofacies, see Clastic lithofacies and Carbonate lithofacies). Pore networks, grain size characteristics, and mineralogy can be analyzed by routine thin section petrography as well as by X-ray diffraction, scanning electron microscopy, capillary pressure measurements, and petrographic image analysis (see Reservoir quality). Analysis of all or most of these properties is essential for adequate reservoir description because these properties provide the database and thus the foundation for reservoir description at larger scales.

In clastic rocks, there is usually a direct relationship between primary depositional lithofacies and reservoir properties and performance. For example, sandstones that become progressively thinner bedded and finer grained stratigraphically upward also become progressively less permeable upward (Figure 2) so that during waterflood, both gravity and higher permeability toward the bottom will pull water down. In contrast, sandstones that become progressively thicker bedded and coarser grained upward also become more permeable upward (Figure 2) so that during waterflood, gravity still pulls the water down, but permeability pulls the water up, resulting in better vertical sweep.[3][4] 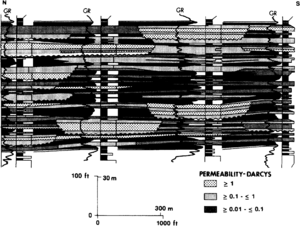 Elements of interwell scale heterogeneity include lateral bedding geometies, styles, and continuity; systematic lateral and vertical textural patterns; and resultant variations in reservoir quality. This scale of heterogeneity is probably the most difficult to quantify because wellbore data of the type previously described must be extrapolated to the interwell region. In many instances, between-well correlations are difficult because lithofacies may not be continuous at interwell spacings. Thus, interpretation must be guided by an understanding of depositional environments and facies (for more information, see Clastic lithofacies and Carbonate lithofacies), interpreted from core analysis and compared with modern environments or outcrop analogs where actual observations and measurements have been made.

Relatively few reliable quantitative studies of depositional environments and facies have been published, and those that have suggest considerable variability in interwell-scale heterogeneities among different depositional systems, as well as within any one system. Excellent examples include Scheihing and Gaynor[5] and Krause et al.[6] for shelf sandstones; van de Graaff and Ealey[4] for fluviodeltaic sequences (Figure 3); and Jordan and Pryor[7] for fluvial sands. 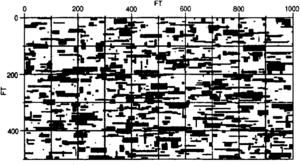 In the absence of sufficient quantitative information on different depositional systems, statistical methods of predicting interwell variability have proven useful. For example, the literature contains many examples of statistics applied to analysis of the lateral continuity and spatial distribution of shales, since fluid flow in a reservoir is particularly sensitive to shale distribution. One commonly cited example[9] predicts the anticipated lengths of shales as a function of depositional environments, so that if the depositional environment of a reservoir sequence is known, measurements of shale thicknesses in wells can be used to generate (using a random number generator) a synthetic reservoir cross section (Figure 4). This approach is particularly fruitful when the lateral dimensions of the shale are thought to be less than well spacings (uncorrelatable or stochastic shales, as opposed to correctable or deterministic shales whose lateral dimensions are greater than well spacings.[8] Statistical methods have also been used to evaluate lateral variations in reservoir properties of sandstones. For example, Stalkup[10] found considerable lateral variability in outcrop measurements of permeability of shallow marine and fluvial sandstones and suggested that permeability distribution should also be described stochastically rather than deterministically. 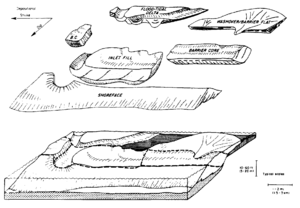 Elements of fieldwide variability include reservoir thickness, facies geometries and continuity, and bulk reservoir properties. Like interwell heterogeneity, heterogeneities at this scale are difficult to assess because information derived at smaller scales must be scaled up and generalized. Depositional models, determined by geological description at the smaller scales, provide the main basis for interpreting fieldwide reservoir architecture. (For more on depositional models, see Lithofacies and environmental analysis of clastic depositional systems and Carbonate reservoir models: facies, diagenesis, and flow characterization.) It is very important to describe the reservoir at this scale adequately because reservoirs, being complex depositional systems, are often compartmentalized (Figure 5), and separate compartments may not be in communication (see Evaluating stratigraphically complex fields).

Compartmentalization gives rise to regional patterns of variability in reservoir characteristics and production performance that directly reflect variability in facies distributions or, more precisely, geological flow units. Unfortunately, it is not always possible to uniquely define the depositional environment and facies distribution because the reservoir, and the geographic distribution of the database from which to formulate an interpretation, may be smaller than the entire depositional system from which the reservoir originates (see Tillman & Jordan[13] and Slatt et al.[14] for examples).