A fault along which movement occurs as sediments are deposited on and above the fault scarp. Continued movement and sedimentation over an extended period of time causes the oldest and lowermost sediments to be offset the most and causes the amount of offset to decrease upward within younger deposits (Figure 1). Such faults are common in the Gulf Coast.[1] 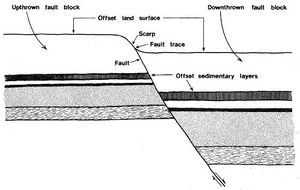 Figure 1 Vertical section through a hypothetical fault in the Houston area. Land surface was originally level, but has since been displaced by movement along the fault. Note thickening of sedimentary layers on the downthrown side. This indicates that faulting occurred repeatedly over a long period of time, while the sediments were being deposited. Such faults are common in the Texas Gulf Coast. From USGS.[1]

Type Style of the resulting structure of the extensional fault may vary. It relies on the tectonic setting and components of geological conditions. Various style structures include domino models, low angle normal fault and the core complex, fault-ramp ramp-flat, rift and half graben.

Normal faults may form a domino fault models. This occurs in conditions of a rigid rheology. Model domino describe a collection of Rigid fault block. Model domino describes a rigid set of fault blocks which undergo simultaneous rotation in uniform movement. Characteristics and limits domino models can be seen from the geometry of the fault, including: No block of internal strain, faults and rock layers simultaneously and rotating at the same speed, all the fault sloped same fault, the fault has offset the same. Layers and faults are planar, all the blocks rotates at the same speed and time. 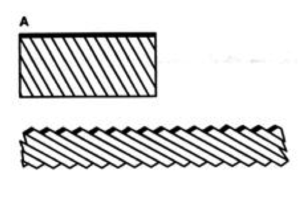 Fault that occurred in the complex basin that experienced a breakthrough either by magma activity (Establishment Pluton) or core metamorphosis process. Beginning a rigid material or ductile experiencing high angle normal faults when the basin is formed (pre-rift phase until rift), then the fault is experiencing rotation forming a low angle normal fault. 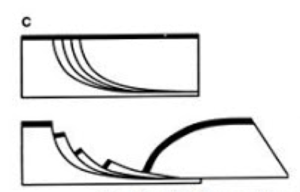 Fault ramp-flat-ramp formed to resemble the formation of the electrical fault on a larger scale. Where hanging wall intensively moves down moves down the field movement. Wedge shape set of fault blocks could develop the above faults developing bias wedge shape above the fault ramp-flat-ramp, which blocks the exit surface. Fault is divided into two blocks, namely blocks imbricate fan and extensional duplex.

Normal faults formed in depressions with asymmetric shapes. Half Graben fault plane has a curved shape, the geometry of a half moon shape. Altitude ridge in the form of horst fault, whereas the low form of graben.