The energy supplied by flowing water has been used by humans since shortly before the start of the Christian era: the waterwheel, the geared water mill, and the Vitruvian mill received increased use as civilization developed in the Mediterranean region. 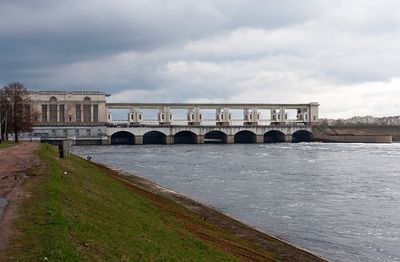 During the Middle Ages, the use of the geared water mill extended throughout Western Europe, where it was used to grind grain, to saw wood and marble, and to crush metallic ores. Water mills became the base for the beginning of industrial development. Flowing water as a source of energy extended to many other regions of the world in subsequent years. 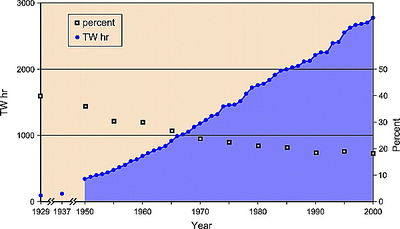 However, it was not until the flow of water was used in the generation of electricity that water started to make a major contribution to the world's supply of energy. Hydroelectric power is, as of 2005, the second largest source of electricity in the world (18%) after coal, which supplies about 38%, but ahead of nuclear power, natural gas, and oil, which contribute 17, 16, and 10%, respectively, of the total generated electricity.

Hydroelectric power was at first believed to be an attractive source of energy, potentially widely distributed around the world, environmentally clean, inexhaustible, efficient, and economically competitive, especially attractive to countries with limited fossil fuel resources. It has been found that this was not always the case.

Although dams, not only those built for the generation of electricity but also those designed for flood control, irrigation, water supply, or a combination of these purposes, have delivered significant benefits, they have often been the cause of disastrous social upheavals and major negative environmental impacts, and their construction has serious geographic limitations.

The building of large dams requires large initial capital investment that is not always rewarded with favorable economic profitability. The reported returns on the investments made in hydroelectric power plants have increasingly been questioned.

Small-scale hydroelectric power plants (small dams or run-of-river plants) are widely distributed throughout the world. They can serve local needs and are often the foundation of rural electrification, but they provide overall only a small percentage of the total world hydroelectricity. Many of them are located in mountainous regions with steep, fast-flowing rivers, in which large dams backing sizable reservoirs cannot be built.

Despite these serious problems, the building of hydroelectric dams increased rapidly during the middle years of the 20th century (1930s to 1970s) and peaked in the 1970s, when an average of two or three large dams were commissioned each day somewhere in the world. Their number increased from 5000 in 1949 to 45,000 in the late 1990s[3] However, information on the unfavorable impacts of dams on people, river basins, the environment, and aquatic life, as well as their not-always-favorable economic performance, in the last 20–30 years generated considerable opposition to the building of dams. This opposition has become more widespread, vocal, and organized and has contributed to a decline in the pace of construction of new, large hydroelectric dams over most of the world in the past two decades. The exceptions are China, where the huge Three Gorges hydroelectric dam is expected to be commissioned between 2003 and 2009, India, and Brazil, where a considerable amount of hydroelectric capacity is under construction or planned. Also contributing to this decline in North America and Europe has been the fact that most technically attractive sites have already been developed. The average large dam today is about 35 years old.

Momentum for river restoration is also accelerating in many countries, especially in the United States, where the decommissioning rate for large dams has overtaken the rate of construction since 1998. Antidam strategies developed principally by environmental and human rights activist groups worldwide have been effective in reducing the pace of construction of dams, of all kinds and sizes, in most countries of the world since the 1970s. Although the global effects on the environment are much less damaging than those of other energy options, the local effects have been made to appear greater.

Nevertheless, hydroelectric power is still important in some countries, especially in those that are short of other sources of electricity but have large rivers originating in mountainous regions.

World Energy Council Survey of Energy Resources, 2001. Discerning although somewhat supportive review of the pros and cons of hydropower.