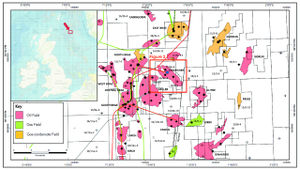 Figure 1 Location map of the Kingfisher field in UKCS Blocks 16/8a and 16/8d showing the nearby producing Brae area fields and discoveries within the South Viking Graben. 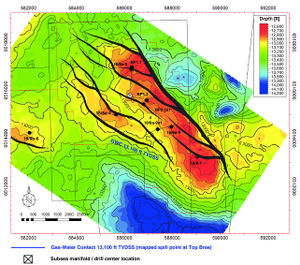 The Kingfisher field (Licences P.295 and P.483) is operated by Shell U.K. Limited (49.74%) and co-owned by Esso Exploration and Production U.K. Limited (49.37%) and Marathon Oil North Sea U.K. Limited (0.89%). Hydrocarbons produced from the Upper Jurassic Brae and Heather reservoir intervals are flowed to the Marathon-operated Brae Bravo platform 9 km (5.6 mi) to the west via two dedicated 10 in. (25 cm) subsea pipelines, where gas and oil are separated, with gas then being exported via the SAGE gas pipeline to St. Fergus and the oil being exported via the Brae-Forties oil pipeline system. 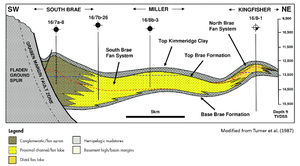 Figure 3 Schematic geological cross section through the Brae submarine fan system from the proximal South Brae area on the margins of the Fladen Ground Spur through the Miller field area to the distal margin near the Kingfisher field 15 km (9 mi) to the northeast. Modified after Turner et al. (1987[8]).

The Kingfisher field is currently estimated to contain 150 MMbbls of oil and condensate and 450 Bcf of gas with a total combined hydrocarbon initially in-place volume of approximately 230 MMboe. Although the Kingfisher field may be small in volumetric terms when compared to many of the other nearby oil and gas fields, its location within the eastern extremities of the Brae area means that it has provided insights into the reservoir complexity that exists within the more distal parts of the basin-floor turbidite fan systems that were deposited within the South Viking Graben (Figure 3).

The South Viking Graben area, in many respects, shares a broadly similar history in terms of geological evolution with the North Viking Graben, with respect to the overall timing and orientation of Late Jurassic extension, stratigraphic evolution, and structural styles (Turner and Connell, 1991[9]; Cherry, 1993[10]; Underhill, 1998[11]; Fraser et al., 2003[12]). However, because of the presence of Zechstein salt at depth within parts of the South Viking Graben, including the vicinity of the Kingfisher field, the evolution of the Brae area in particular shows some similarities to parts of the Central Graben where halokinesis has provided a localized control on subsidence and the evolution of faulting. This has resulted in a more complex and diverse range of geological structures when compared to the more classical rotated fault blocks of the North Viking Graben Brent province.

The main period of extensional rifting in the South Viking Graben occurred during the Late Jurassic (Kimmeridgian–Tithonian) and was predated by comparatively minor extensional episodes during the Triassic and Middle Jurassic. Evidence based on seismic and well data sets shows that Upper Jurassic faults exploited and reactivated some existing Middle Jurassic faults in places. Salt halokinesis and subsidence also, in part, controlled the location of Upper Jurassic fault systems and, as a result, the development of synrift hanging wall basins and footwall highs. In addition, minor compressional phases within the South Viking Graben area during the Early Cretaceous to Cenozoic appear to be similar in timing and structural style to events seen in the Central North Sea. The compression resulted in structural inversion and folding of Jurassic and Lower Cretaceous sequences within the immediate hanging walls of major Upper Jurassic faults. The East Brae (Branter, 2003) and North Brae structures show clear evidence for inversion (Stephenson, 1991[13]; Brehm, 2003[14]). However, some of the structures that have previously been interpreted as being compressional in origin might actually have formed, in whole or in part, as a result of extensional tectonics. In this alternate scenario, some of the structures expressed at the Base Cretaceous unconformity (BCU) can be envisaged as being related to synrift fault growth and linkage instead of the result of structural inversion.

The stratigraphy of the South Viking Graben area comprises a Permian–Triassic prerift sequence of mudstones and evaporites overlain by a thin Lower Jurassic interval and a thicker interval of Middle Jurassic Pentland Formation and, in some areas, Hugin Formation. The Pentland Formation contains coal-bearing and mudstone-rich sediments of source rock quality within the oil and gas windows within the area of the Kingfisher field.

The Pentland–Hugin Formation interval is overlain by the thick Callovian–Oxfordian age Heather Formation, which is dominated by claystones inter-bedded with limestones and represents the onset of marine conditions within the Brae subarea and wider South Viking Graben toward the end of the Middle Jurassic and into the Late Jurassic. A Heather sandstone member is present within the area of the Kingfisher field and is interpreted to represent a deep-marine mass flow sandstone deposited by turbidity currents. This Heather sand represents a secondary reservoir interval within the Kingfisher field and was developed as a high-pressure and high-temperature (HPHT) gas-condensate reservoir (Spence and Kreutz, 2003[1]).

The Heather Formation is in turn overlain by a thick Upper Jurassic synrift sequence of interbedded claystones and sandstones that comprise the Kimmeridge Clay Formation and Brae sandstone member intervals deposited across the South Viking Graben area (Spence and Kreutz, 2003[1]). 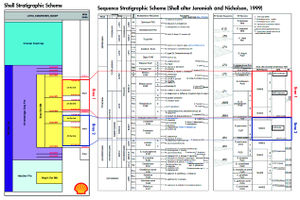 Figure 4 Summary stratigraphic column showing the lithostratigraphic and sequence stratigraphic units and maximum flooding surfaces used to subdivide and correlate within the Brae sandstone member in the area of the Kingfisher field. Also shown are the BPbridge plug genetic sequences based on Partington et al. (1993[15]). 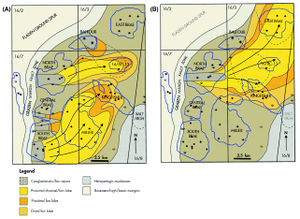 Figure 5 Simplified schematic map showing the depositional extent of the (A) South Brae and (B) North Brae submarine fan lobes within the Brae depositional system. Note that the South Brae and North Brae submarine fans correspond to the Brae 2 and Brae 1 intervals, respectively. Modified from Turner and Connell (1991[9]) and Spence and Kreutz (2003[1]).

The deposition of the Brae sandstone member represents the influx of large volumes of coarse clastic material into the South Viking Graben area and Brae subarea during the Kimmeridgian–Tithonian synrift from the Fladen Ground Spur area to the west (Figure 3, Figure 5). During this time, coarse conglomeratic point-sourced deep-water fan-apron sediments were deposited along the margins of the Fladen Ground Spur forming the proximal Brae fans, which are the reservoir intervals in the South, Central, and North Brae fields as well as the “Trees fields” in Block 16/12 to the south (including Larch, Birch, and Sycamore) and the “T Block” (16/17) fields (Tiffany, Toni, and Thelma). These proximal fan-apron systems were the source of sand-rich turbidity currents that fed finer grained clastic material into the deeper parts of the basin-floor area resulting in the deposition of sand-rich lobe sediments present within the reservoir intervals in the Miller, Kingfisher, and East Brae fields (Rooksby, 1991[2]; Garland, 1993[3]; Branter, 2003[16]; Spence and Kreutz, 2003[1]) (Figure 1, Figure 5).

During periods of cessation of deposition of the Brae conglomerates and sands along the margins of the Fladen Ground Spur, and more distal parts of the basin to the east and northeast, the deposition of organic-rich hemipelagic shales occurred in an overall anoxic basin-floor environment resulting in the deposition of the Kimmeridge Clay Formation, with which the Brae reservoirs interfinger. The Kimmeridge Clay Formation source rock generated much of the hydrocarbons that have accumulated in, and been produced from, the Brae area fields as well as providing top, base, and lateral seals to the hydrocarbon accumulations.

Overlying the Upper Jurassic succession is a Cretaceous section comprising claystones and limestones of the Cromer Knoll Group and chalks, marls, and occasional claystones of the Shetland Group deposited during the postrift thermal sag phase. The Cenozoic to recent section is characterized by a thick section of claystones, sandstones, and siltstones deposited during continued postrift thermal subsidence. This subsidence was punctuated by periodic uplift of the Scottish mainland with rejuvenation of sediment source areas because of the onset of crustal extension and seafloor spreading along the northwest Atlantic margin.