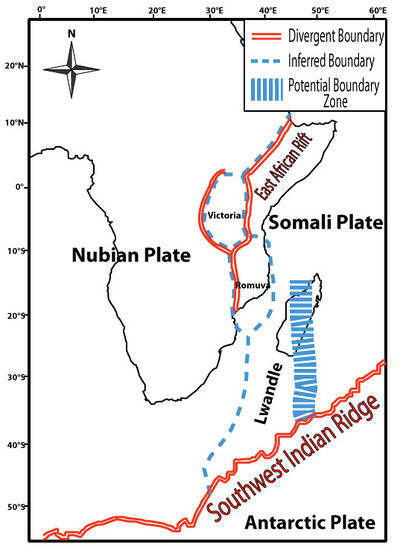 Lwandle and its neighboring plates are shown. This figure is simplified, modified from Stamps et al.[1]

The Lwandle Plate is one of three tectonic micro-plates that previously made up the African Plate, along with the Somali Plate and the Nubian Plate. Its discovery is very recent, so the velocity of the plate isn't well known or understood.[2] Many experiments are ongoing to quantify this. The Lwandle Plate lies between 30°E and 50°E, sharing a boundary with the Nubia, Somali and Antarctic Plates.[3]

The Lwandle Plate is largely oceanic, resting off the southeast coast of Africa. It is currently believed that the bottom half of Madagascar is part of the Lwandlean Plate, with one of the plate boundaries cutting through the island.[3][4][1] 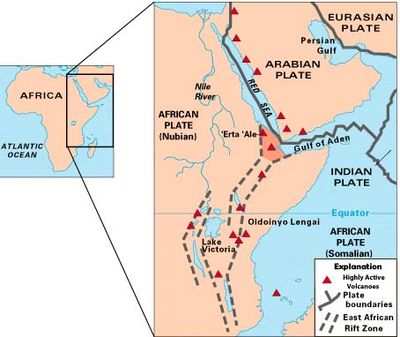 The East African Rift, where three plates are pulling away from one another: the Arabian Plate and two parts of the African Plate—the Nubian and Somali—which eventually led to the formation of the Lwandle plate as well as other micro-plates. The Afar Triangle, shaded at the center, is a triple junction that separates the three plates. From USGS[5]

For many years it was widely accepted that rifting in the East African Rift system, 22-25 million years ago, resulted in the splitting of the African Plate into 2 smaller plates - the Somali Plate and the Nubian Plate.[6] However, most recently, through the application of GPS technology and integration of earthquake data, it was discovered that the rift created three additional “micro-plates” plates - the Lwandle Plate, Victoria Plate, and Romuva Plate.[2]

Earthquakes occur most often at plate boundaries and have been used as a guide to predict the locations of multiple plate boundaries.[7][8] “Lwandle’s” existence was postulated after studying earthquake data in areas that were once assumed to be the interiors of the Nubian and Somali plates.[9] By including the Lwandlean Plate in their calculation, researchers were able to more accurately solve for the intersection between the East African Rift and the Southwest Indian Ridge.

GPS technology and data was also introduced in an effort to show with certainty the difference between the Somali Plate and the Nubian Plate. Using the GPS data, researchers could measure the velocity of tectonic plates from their interiors.[10][11][12]

In 2008, the entire East African Rift System was successfully "quantified" through the integration of the GPS and earthquake data with the spreading rate and transform azimuth constraints.[1]

There have been very few studies that directly study the Lwandlean Plate. Previous studies about Lwandle have primarily been focused on attempting to quantify the mechanics of the African Rift System.[2] For this reason, the presumed evolution and formation of the micro-plates are not well known.

The discovery of this plate is revolutionary. Its discovery clarifies that the term “African plate” no longer applies to present-day plate tectonics.[14]

The majority of Lwandle's plate boundaries are not well understood.[1] What is known is:

GPS data paired with earthquake slip data is used to estimate the velocity of the Lwandle Plate and its neighbors. The velocity of the Lwandlean Plate, relative to the Nubian and Somali plates, is estimated to be a very slow rate (1-2 mm/yr). With these low rates of motion, it is expected that this area wouldn't have much seismic activity. The data shows exactly that.[2] Though Lwandle is moving faster relative to the Antarctic plate than to Nubian and Somali, this spreading ridge is one of the slowest on planet Earth, spreading at less than half the rate of human fingernail growth.[18] It appears that, for now, Lwandle will be in its current position for quite some time.[3] 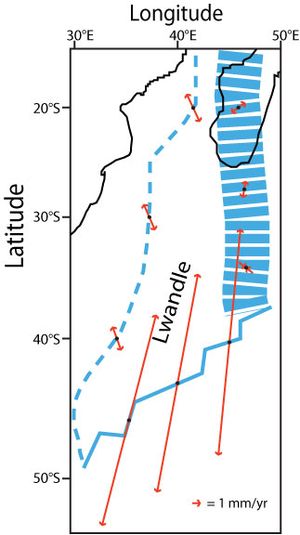 Red arrows show the relative plate velocity at that boundary.