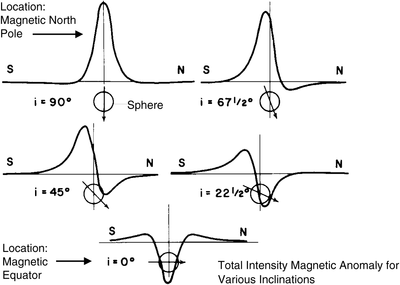 Figure 1 Profiles of magnetic total intensity anomalies for the same object at different latitudes in the northern hemisphere.[1] Copyright: Society of Exploration Geophysicists.

The earth's magnetic field has magnetized certain minerals in the upper part of the crust. Magnetite, an accessory mineral, is by far the most important. This magnetization has two parts: remanent magnetism, which was acquired when the rocks were formed, and induced magnetism, which is proportional to the present earth's field and the magnetic susceptibility of the rocks. The magnetization disappears at temperatures above the Curie point, so that only the topmost 15 to 25 miles of rock are involved. Most sedimentary rocks contain little or no magnetite, and the crystalline basement rocks are by far the most important contributors to local variations in the magnetic field.

The main magnetic field of the earth is caused by electric currents in the core. The intensity of the field is measured in gammas or the equivalent SI unit of nanoteslas (nT), and it varies from about 60,000 gammas in a vertical direction at the poles to 30,000 gammas in a horizontal direction at the equator. The International Geomagnetic Reference Field (IGRF) is a mathematical approximation of this field, usually removed in processing survey data to make it easier to study the anomalies caused by crustal rocks. The IGRF is regularly updated since the field varies with time.

Magnetic anomalies for an object of the same size, composition, and depth have different signatures at different magnetic latitudes because the magnetic inclination—the angle at which the magnetic force field is oriented with the earth's surface—changes with latitude. Figure 1 shows profiles of magnetic total intensity anomalies for the same object at different latitudes in the northern hemisphere. In the southern hemisphere the profiles would be the opposite [north and south would reverse south of the equator and the inclination angles (i) would be negative].

The table below summarizes the differences between gravity and magnetics. 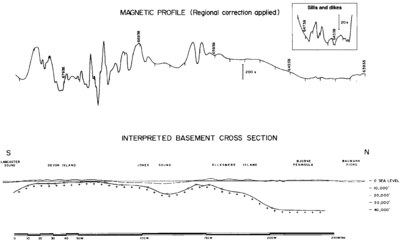 Figure 2 This long aeromagnetic profile from the Canadian Arctic islands illustrates the main use of aeromagnetics in petroleum exploration. Each small circle on the basement cross section shows a depth determined from the magnetic profile. At the south end, the magnetic anomalies are sharp over the shallow basement of Devon Island. Anomalies broaden over Jones Sound where the basement deepens and then become sharper as it rises again. The basin develops fully to the north, and minor sharp anomalies (shown on expanded scale) indicate dikes and sills within the sediments.

Aeromagnetic surveys have been enormously successful in mineral exploration as an aid to geological mapping since they help to outline different rock units and allow interpretation of structure. They have been widely applied in the reconnaissance of sedimentary basins for mapping the basement surface. More recently, detailed high resolution aeromagnetic surveys have been aimed at weak anomalies arising from the sedimentary section (Figure 2).

The airborne magnetometer measures the total intensity of the earth's magnetic field. Modern instruments have a sensitivity of 0.01 gammas (or 0.01 nT). Gradients of the field are sometimes measured as well. Data are recorded by flying along a set of parallel lines that have perpendicular control lines to tie them together. Over smooth terrain, the magnetometer can be flown as low as 100 ft30.48 m
1,200.001 in above the earth's surface, but heights of 500 to 1500 ft457.2 m are more typical. The line spacing for complete detail should not be much greater than the depth of the anomaly sources that are the survey target. The data are usually processed to produce total intensity contour maps (with intervals down to 1 gamma and occasionally less) and digital data files. The processing often includes calculation of the vertical gradient or second vertical derivative of the total intensity, which sharpen and emphasize local anomalies. In middle latitudes, reduction to the pole can make anomalies appear as if measured in a vertical instead of an inclined magnetic field. Filtering techniques are applied to separate anomalies of different wavelengths. Depths of anomaly sources can be calculated using a variety of model shapes, usually working with individual profiles. Finally, the interpreter determines the most probable geological anomaly sources in terms of their boundaries, size, shape, depth, and magnetization and assembles a coherent geological whole.

During the past 50 years, most of the earth's land surface has been surveyed by aeromagnetics with varying detail, and a high proportion of the results have been published. Airborne and marine surveys of the oceans are less complete, but have provided the basis for studies of oceanic crust and continental drift. A sampling of regional magnetic studies has been presented by Hinze,[2] and publication of the magnetic anomaly map of North America[3] showed results on a continental scale. Paterson and Reeves[4] have reviewed the state of the art in magnetics.

Since sedimentary rocks have little magnetism, the classic use of magnetic surveys in petroleum exploration has been to map basement rocks, as well as any intrusives or volcanics within the sediments. Basement depths are determined and faults are interpreted from disruptions in the magnetic patterns. Such applications are most common in the early stages of exploring a basin, and thus, magnetic data have been little used in development programs. However, the high sensitivity of modern instruments has allowed detection and mapping of weak magnetic anomalies arising from within the sediments. The sources of these intrasedimentary anomalies vary from one region to another and include salt structures, faulting, and diagenetic formation of magnetite from seeping hydrocarbons, as suggested by Donovan et al.[5] It has been difficult to establish the sources with certainty, especially in the presence of magnetic anomalies introduced by human activities, such as the use of steel in oilfield development. Reynolds et al.[6] have recently studied this problem over the Cement oil field.

The application of magnetics to development geology is unlikely to be important except in two special circumstances. The first situation is when the field is related to basement structure and both regional and local magnetic features are involved. The second case is when intrasedimentary magnetic anomalies have been detected and may provide a key to local boundaries.