An oil shale is defined as a fine-grained sedimentary rock that contains a high proportion of endogenous organic matter (kerogen) mostly insoluble in ordinary petroleum solvents, from which substantial amounts of synthetic oil and/or gas can be extracted by heating it to a sufficiently high temperature, a process called retorting. Oil shales have a low calorific value and high ash and mineral content. 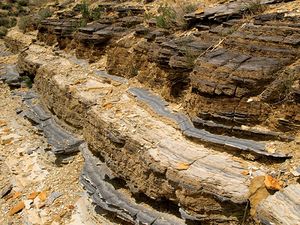 The potential of an oil shale as a source of energy depends on the economic recoverability of oil (and gas) from it. The lower limit of the oil yield for an oil shale to be considered potentially economic now ranges between 10 and 15 gal of shale oil per ton, but the development of new mining and processing technology for the oil shale or a substantial increase of the price of oil may make oil shales with lower oil yields economically attractive in the future. At present, only the oil shales with the higher oil yields are used to obtain shale oil, about 25% of the total world oil shales mined. The remaining 75% is mainly used as a solid fuel in the generation of electricity and heat (69%) and for the production of synthetic domestic gas, cement, and speciality chemical products (6%).

Oil shales are known from many countries throughout the world. They range in age from Proterozoic to Tertiary, but not all are potential commercial sources of energy. Russell[1] discusses the occurrence of oil shales in 51 countries (see also Duncan and Swanson[2] and Office of Technology Assessment[3]). Dyni[4] lists 36 countries containing oil-shale deposits in a table with their corresponding estimates of in-place shale-oil resources and discusses the 14 countries with the largest of these deposits. The most important oil-shale deposits are those of the Eocene Green River Formation in the states of Colorado, Utah, and Wyoming in the United States and those of the Permian Irati Shale of southern Brazil. Other significant oil-shale deposits are known in Estonia, China, Russa, Australia, Canada, Morocco, Israel, and Jordan. More than 40 other countries are reported to have oil-shale deposits, but few of them are, as of 2005, considered as possible commercial sources of energy.

In most countries of the world, the oil-shale deposits are insufficiently studied, and information concerning their size or the quality of the shale is, in many cases, lacking or, worse, greatly exaggerated.

The production of oil from oil shales is not new; a synthetic crude oil (SCO) was first manufactured in Scotland in 1694 by retorting oil shale. Significant production began from these Scottish oil shales in the 1840s and peaked in 1913 with a cumulative production of about 1.5 million bblbarrels of oil per year. Production ended in the 1960s because it was not possible to compete with low-cost imported oil.

In 1815, commercial oil-shale retorting was started in New Brunswick, Canada, and between 1850 and 1860, more than 50 commercial plants were constructed in the United States to retort oil from shale imported from Canada. “Colonel” Drake's discovery of oil near Titusville, Pennsylvania, in 1859 closed down the oil-shale industry in the United States and Canada, but minor production continued in several other countries. Oil shale has been used in Estonia since 1916, principally as solid fuel in the generation of electricity; retorting of the shale to obtain oil has been only a small part of the oil-shale industry in Estonia; at most, only about one-third of the oil shale mined was retorted to obtain shale oil.

Since the beginning of the oil-shale industry, more than 1 billion tons of oil shale are believed to have been mined in 19 countries, 80% of it in China and Estonia.

Two general processes of recovery of shale oil have been attempted:

This second process is, as of 2005, still in an experimental stage but holds promise, because it reduces the harm to the environment.