Paleobathymetry—the determination of ancient water depth (paleodepth)—is the paleoenvironmental interpretation most widely used in petroleum exploration because of its value in determining the depositional history of a basin. Benthic foraminifera are usually used for this purpose. As bottom dwellers, they provide information about conditions at the sea floor. Many species live within a relatively limited range of water depths in patterns normally related to water mass distribution within the basin rather than directly to bathymetry. Other marine microfossils are occasionally used for more generalized paleodepth determinations.

By observing modern foraminiferal populations and the distribution of modern species, paleontologists can predict (or extrapolate) the water depth ranges of their ancestors. This method, based on widespread studies of living forms, relies on the concept of taxonomic uniformitarianism, which assumes most modern organisms have the same, or very similar, environmental restrictions as their fossil relatives.[1] Most Pleistocene, Pliocene, and Miocene foraminiferal species either are still living or have very close living relatives in modern oceans. In practice, this evolutionary stability lets us accurately estimate paleobathymetry as far back as the middle Miocene (about 14.5 Ma). The accuracy of this method decreases with geologic age but is generally accepted to be broadly useful within the Cenozoic.

Limits on reliability of interpretation

Depth is merely the vertical component of the site location relative to sea level—an arbitrarily defined point in space. Unlike temperature or salinity, depth is not a true environmental parameter because it does not directly influence the morphology, distribution, or biological processes of marine organisms. However, foraminifera can help us estimate paleodepth because many environmental factors influencing their distribution (notably ambient light, oxygen, and temperature) change systematically with increasing water depth.

Modern foraminiferal distributions reflect oceanographic patterns in a glacial world ocean that originated in the middle Miocene; they are less accurate in estimating paleobathymetry for the preglacial early and middle Tertiary. Early Tertiary and Mesozoic oceans were much warmer and less stratified than at present, and accurate paleodepth estimates must be based on recalibrated early Paleogene and Cretaceous distributions (e.g., Sliter & Baker;[2] Olsson & Nyong.[3] 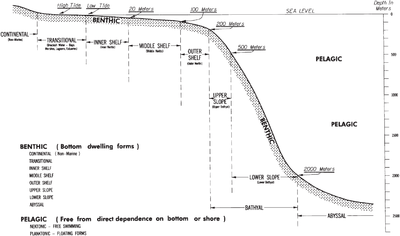 A commonly accepted classification of marine environments is the zonation of Tipsword et al.[4] shown in Figure 1.

The continental margin profile is divided into zones that can be distinguished by distinct assemblages of microorganisms. The following table shows the depth zones and microorganisms found there.

Foraminifera, particularly benthic species, may be strongly provincial, and faunas from widely separated regions may include very different assemblages of species. We need to understand the modern depth-related species distribution prevailing in a region before we can estimate paleobathymetry for ancient sediments.

Douglas and Heitman[5] summarize foraminiferal depth distributions in the modern offshore California borderland; data of this sort enable Ingle[6] to propose bathymetric zonations for the Tertiary of coastal California.