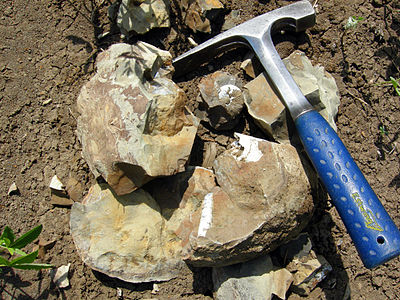 A broken concretion with fossils inside; Late Cretaceous Pierre shale, near Ekalaka, Montana. Photograph taken by Mark A. Wilson (Department of Geology, The College of Wooster).

Paleontology, the study of fossil organisms and their traces, has been used in the exploration for and exploitation of hydrocarbons since the later half of the nineteenth century. Because fossil assemblages change through time, they aid in the prediction of depth to reservoirs, to casing points, and to overpressured zones. Chronostratigraphic assemblages are the basis for correlating strata among wells, across basins, and between basins. Correlation is the method for predicting the lateral continuity and physical and chronostratigraphic equivalency of strata. Fossil assemblages are also evidence of the depositional environments of the drilled |strata and thus play a role in predicting the location of reservoirs, source rocks, and pinch-out of porous strata.

Age and correlation of strata 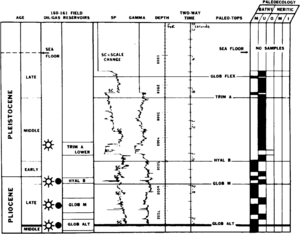 Because fossil species evolved through time in genetically related lineages and because extinction events were followed by new assemblages of species, fossils provide the best criteria for dividing the geological record into time intervals characterized by the first-appearance datums (FADs) and last-appearance datums (LADs) of key species (Figure 1). Fossil tops and bases may be synchronous in sections where the strata record continuous deposition and where suitable environmental conditions persisted. 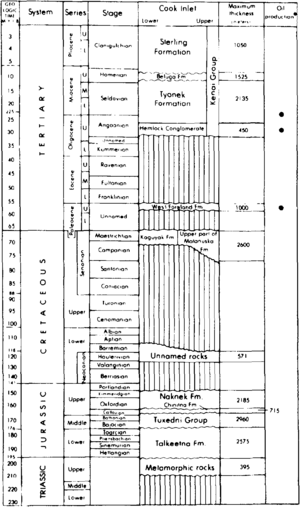 Key fossil datums in reference sections provide the basic division of the geological section into systems, series, and stages.[5] However, reference sections may not contain a complete record of sedimentation because the contacts between many strata are unconformable. Therefore, the continuous span of time is divided into eras, epochs, and ages (Figure 2). The intervals of geological time are calibrated to absolute time by means of radiometric or isotopic ages from interbedded or cross-cutting rocks such as volcanic flows and ash beds.

In most wells, the LADs of fossils are the most useful datum planes for subdividing, dating, and correlating the lithostratigraphic section (Figure 1) because the drilling procedure may extend the FADs of fossils by caving of cuttings. However, in certain conditions, the LADlast appearance datum may be overextended by reworking of the specimens above an unconformity, and the FADfirst appearance datum may be in older rocks due to contamination from the drilling mud.[6] The fossil top may also be depressed (or older) in a given well for a number of reasons: the strata with the uppermost part of the range may be eroded, environmental conditions prevented the species from living there, or the specimens may have dissolved. If a species is not abundant at the top of its range, it may be missed in drilling and sampling.

Knowing the age and thickness of the strata enables prediction of depth to reservoir or casing points and depth to maturation of source rocks. For example, casing points are important for engineering decisions when drilling unconsolidated Plio-Pleistocene (5.333 to 2.588 Ma) muds in the Gulf of Mexico and offshore Trinidad. Drilling stops when key fossils are encountered, and casing is set to prevent the hole from collapsing or to control high pressure zones that lie deeper.

Fossil assemblages also define the position of unconformities and the duration of hiatuses and may aid in the recognition of faults and the correlation of strata across faults.

Most fossil species required specific conditions of temperature, substrate, and surrounding medium to carry on their normal activities. When conditions differed from ideal, the species is not present or is not preserved. The types of sedimentary rocks deposited under specific environmental conditions are biofacies and are identified by their specific rock properties including fossils.[7][8]

Fossils most commonly used in hydrocarbon exploration are microfossils (generally smaller than about 2 mm) because they can be recovered from drill cuttings without much damage to the fossils. Different processing techniques separate calcareous, siliceous, phosphatic, and organic-walled fossils.[9][10]

The major groups of marine fossils are nannoplankton (sometimes called coccoliths), foraminifera, radiolarians, diatoms, conodonts, ostracods, palynomorphs (such as organic-walled dinoflagellates), spores and pollen, and various types of megafossils. Nonmarine facies may yield spores and pollen, and [1] facies may also contain ostracods and diatoms. These and other fossils are described in the Encyclopedia of Paleontology.[11]

The distribution of fossils in a particular basin depends on the age of the strata, biogeographic setting, bathymetry, depositional environment, lithology, and diagenetic events. Knowledge of these factors influences the decisions of whether to search for fossils in the drill cuttings or core and what fossil group to use.

The geological age of strata determines which fossils may be present. Nannoplankton first evolved in the Late Triassic (235 Ma). Planktonic [[2]] evolved during the Late Jurassic (163.5 Ma) and were very diverse during the Cretaceous and Tertiary (145 to 2.588 Ma). Diatoms are found in rocks as old as Early Cretaceous (145 Ma), and radiolarians have a spotty occurrence back to the Ordovician (485.4 Ma). Ostracods and benthic foraminifers can be found in marine rocks as old as Ordovician. Phosphatic conodonts are locally abundant from Ordovician to Triassic strata. Of the organic-walled fossils, a variety of marine groups and spores are found throughout the Paleozoic. Marine dinoflagellates were common during the Jurassic. Fossil pollen is no older than Early Cretaceous. Megafossils, large benthic foraminifers, and calcareous algae can be found in most marine strata of the Phanerozoic.

The geographic setting of a basin during deposition influences the type of climate, mean annual temperature and rainfall, and oceanic and wind currents. Climatic conditions may exclude certain species from the basin, or they may favor the proliferation and abundance of a species group. Because of significant reorganizations of crustal plates during the Paleozoic, the present position of a basin may be quite different from its position during deposition.

Lithology is one of the most useful criteria in selecting the types of fossils used in solving exploration problems. Organic-walled fossils, such as spores, pollen, and dinoflagellates, are found in most argillaceous rocks, but they are rare in clean sandstone and limestone. Calcareous nannoplankton, foraminifers, conodonts, and ostracods can be recovered from shales, sandstones, and many types of limestone. Siliceous radiolaria and diatoms occur in shale and deep water limestone.

Fossil assemblages may provide evidence for local environmental conditions that also influenced deposition of potential reservoirs and source rocks. For example, reefs are formed by a community of interacting species that live together under the same conditions. Communities of terrestrial organisms normally are transported and concentrated into fluvial or lacustrine deposits and are mixed with aquatic organisms. Marine organisms may also be transported, and species from different communities may be mixed by storms and other currents. (For more information on depositional environments, see Lithofacies and environmental analysis of clastic depositional systems and Carbonate reservoir models: facies, diagenesis, and flow characterization). 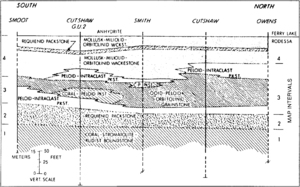 An example of how fossil assemblages affect reservoir quality and distribution can be seen in the Lower Cretaceous reef complexes of the Running Duke Field, Houston County, Texas. In these reef complexes, reservoir properties are partially controlled by the ancient communities of reef-building mollusks], corals, and algae (Figure 3).[12] The reefs built by corals, algae, and rudists formed shoal water areas where waves and other currents deposited oolites and well-sorted bioclasts. Diagenetic conditions in this facies formed reservoir porosity. Recognition of the fossils in cuttings, cores, and thin sections complement petrographic and log analyses and aid in the recognition of reservoir quality rocks.

Deposition, concentration, and preservation of organic matter to form source rocks require special environmental conditions. Fossils aid in the recognition of these unique settings, which are primarily defined by geochemical and petrological parameters. The Cretaceous Mowry Shale in Wyoming, for example, is an important source rock and contains from 1 to 5.2% organic carbon.[13] The richest source rock is homogeneous pelagic mudstone that contains layers of siliceous radiolaria, kerogen, and fish debris. This mudstone was deposited in a restricted basin, where the water column was stratified and bottom waters were depleted in oxygen, allowing the preservation of organic matter. Anaerobic conditions are indicated by the presence of shallow water pelagic species and by the virtual absence of bottom-dwelling species or traces of animal activity. Lateral changes in the kinds and abundances of fossils and sedimentary structures also give clues to the oxygen gradient in the basin. Nearshore bottom-dwelling biota are found only at the margins of the Mowry sea.