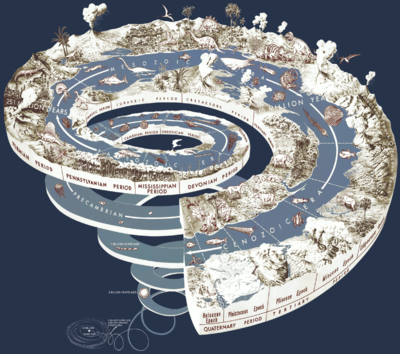 Petroleum reservoirs may contain any of the three fluid phases—water (brine), oil, or gas. The initial distribution of phases depends on depth, temperature, pressure, composition, historical migration, type of geological trap, and reservoir heterogeneity (that is, varying rock properties). The forces that originally distribute the fluids are gravity, capillary, molecular diffusion, thermal convection, and pressure gradients. It is generally assumed that reservoir fluids are in a static state when discovered or, more correctly, that fluids are moving at a very slow rate relative to the time required to extract the fluids (10 to 50 years). Clearly the fluids may still be in a dynamic state in terms of geological time.

Because gravity is the dominant force in distributing fluids through geological time, hydrocarbons migrate upward and are trapped against impermeable cap rock. Gas overlies oil, which overlies water. However, because the reservoir pores are usually saturated completely by water before hydrocarbon migration and because capillary forces acting to retain water in the smallest pores exceed gravity forces, an initial (connate) water saturation will always be found in hydrocarbon-bearing formations. The connate water saturation may vary from 5 to 50% with the hydrocarbons still having sufficient mobility to produce at economical rates.

This article, along with the See also articles, reviews the physical and thermodynamic properties of gas, oil, and reservoir brine. As commonly done, the phase and volumetric behavior of petroleum reservoir fluids is referred to as PVT (pressure-volume-temperature). Two important general references on PVT are Katz et al.[2] and Society of Petroleum Engineers.[3] 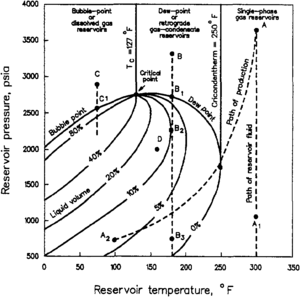 The amount of surface gas that can be dissolved in a stock tank oil when brought to a specific pressure and temperature. Denoted mathematically as Rs (SCFstandard cubic feet/STBstock tank barrels).

The amount of surface condensate that can be vaporized in a surface gas at a specific pressure and temperature; sometimes referred to as liquid content. Denoted mathematically as rs (STBstock tank barrels/MMSCF). 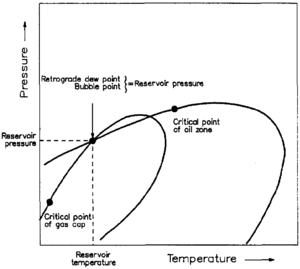 Figure 2 Pressure-temperature phase diagrams of gas cap and oil fluids in a reservoir that is Initially at saturated conditions.

At a given temperature, this condition occurs when an oil releases an infinitesimal bubble of gas from solution when pressure drops below the bubblepoint.

At a given temperature, this condition occurs when a gas condenses an infinitesimal drop of oil from solution when pressure drops below the dewpoint.

Quantifies the amount of each component in a reservoir mixture, usually reported in mole fraction. Typical components in petroleum reservoir mixtures include the nonhydrocarbons N2, CO2, and H2S and the hydrocarbons C1 C2, C3iC4nC4, iC5, nC5, C6, and C7+ (C7+, or “heptanes-plus,” includes many hundreds of heavier compounds, such as paraffins, napthenes, and aromatics). Asphaltenes are also found in reservoir oils.

A condition when an oil or a gas is in a single phase but not at its saturation point (bubblepoint or dewpoint), that is, the mixture is at a pressure greater than its saturation pressure.

The water found in petroleum reservoirs is usually a brine consisting mostly of sodium chloride (NaCl) in quantities from 10 to 350 ppt (‰); seawater has about 35 ppt. Other compounds (electrolytes) found in reservoir brines include calcium (Ca), magnesium (Mg), sulfate (SO4), bicarbonate (HCO3), iodide (I), and bromide (Br). Brine specific gravity increases with salinity in units of about 0.075 per 100 ppt.

At reservoir conditions, the brine that is sharing pore space with hydrocarbons always contains a limited amount of solution gas (mainly methane), from about 10 SCFstandard cubic feet/STBstock tank barrels at 1000 psia to about 35 SCFstandard cubic feet/STBstock tank barrels at 10,000 psia for gas-water systems and slightly less for oil-water systems. Increasing salinity decreases gas in solution. Water compressibility ranges from 2.5 to 5 × 10–6 psi–1, decreasing with increasing salinity. Water viscosity ranges from about 0.3 cP at high temperatures (>250°F394.261 K
121.111 °C
709.67 °R) to about 1 cP at ambient temperatures, increasing with increasing salinity. Finally, reservoir brines exhibit only slight shrinkage (<5%) when produced to the surface.

The first three of these are gas reservoir fluid types, which are in a gaseous state at virgin reservoir conditions, meaning that the critical temperature of the reservoir fluid is less than the reservoir temperature. Dry gas and wet gas fluids consist mainly of light and intermediate hydrocarbons (N2, CO2, H2S, and C1 to C2), in which no liquids will condense in the reservoir rock during pressure depletion. Wet gases produce high APIAmerican Petroleum Institute condensate (distillate) at surface conditions in amounts usually less than about 5 STBstock tank barrels/MMSCF. The OGR should remain constant throughout the depletion of a wet gas reservoir.

Reservoir oils are classified as either black oil or volatile oil, the former being more commonly discovered in the first 50 years of the oil industry. Volatile oil reservoirs have become the norm in the past 20 years, mainly because discoveries are at greater depths with higher initial pressures. A clear demarcation between these two oil types is not easily made, although a gas-oil ratio of about 750 SCFstandard cubic feet/STBstock tank barrels is probably a good indicator (black oils have lower GORs). Volatile oils may have GORs up to 2500 SCFstandard cubic feet/STBstock tank barrels and formation volume factors as large as three (meaning that the oil shrinks by a factor of three when produced to the surface). Another characteristic of volatile oil reservoirs is that the reservoir gas that evolves and flows into the wellbore will contain significant quantities of liquids that may eventually contribute the majority of surface oil production at late stages of depletion.

Table 1 gives some typical reservoir fluid compositions and properties. Figure 1 shows a pressure-temperature diagram for a specific reservoir fluid composition. Depending on reservoir temperature, this fluid would be defined as an oil or a gas. An oil exhibits a bubblepoint pressure at saturated conditions, while a gas condensate exhibits a dewpoint pressure at saturated conditions.

If a reservoir contains both a gas cap and an oil zone, then both fluids are normally at saturated conditions initially. Initial pressure equals the dewpoint of the gas cap fluid, and it equals the bubblepoint of the underlying oil (Figure 2). The repeat formation tester (RFT) has made the determination of initial fluid contacts possible in reservoirs with reasonable permeability, that is, >1 md. A saturated gas cap in equilibrium with an underlying saturated oil, for example, will be seen as a sharp discontinuity in RFT pressures at the gas-oil contact.

In the past 20 years, deeper petroleum reservoirs have been discovered and the traditional interpretation of a reservoir containing both gas and oil has changed. An alternative interpretation in some gas-oil reservoirs is that composition varies continuously with depth. Here the fluids at the shallowest elevations are gas condensates, while the fluids at greater depths are oils. Sometimes the initial reservoir pressure may be greater than the saturation pressure of all mixtures in the reservoir, implying that the reservoir is entirely undersaturated even though a gas is at the top and an oil is at the bottom of the reservoir. Reservoirs of this type would not show a sharp contrast in RFT pressures at the depth where the fluid changes from a near-critical gas to a near-critical oil. Instead they would show a continuously increasing pressure gradient (for example, from 0.2 to 0.3 psi/ft).

Equations of state (EOS) are now commonly used to calculate phase and volumetric behavior of reservoir mixtures. In particular, EOS are useful for predicting phase behavior of miscible and immiscible displacement processes resulting from the injection of gases such as carbon dioxide, nitrogen, and lean or enriched natural gas in oil and gas condensate reservoirs. EOS do not usually predict phase and volumetric behavior of reservoir mixtures accurately, thereby requiring adjustment of component properties to match experimental PVT data.[7]

Experimental PVT measurements are usually obtained for (1) large oil and gas fields, (2) volatile oil and gas condensate reservoirs, and (3) reservoirs where gas injection is a potential EOR (enhanced oil recovery) method. Two types of fluid samples can be taken during production, or when a well is shut-in:

Recombined separator samples are standard for gas condensate fluids, but they may also be used for oil reservoirs. Bottomhole sampling is preferred for oils if the reservoir is undersaturated (that is, the initial pressure is higher than the bubblepoint pressure).

Compositional analyses are used to describe the reservoir fluid makeup on a component basis, including calculation of British thermal unit (BTU) (energy content) of gases, optimization of separator conditions for liquid yield, and characterization of an EOS for compositional simulation. Differential liberation and constant volume depletion experiments are designed to provide quantitative information about the volumetric behavior of oil and gas condensate reservoirs during pressure depletion. The multistage separator test is used together with differential liberation and constant volume depletion data to calculate black oil properties Rs, Bo, Bg, and rs. Multicontact gas injection experiments provide important volumetric and compositional data that can be used to “tune” an equation of state (or alternative) model for simulation of gas injection processes.