Normal reservoir pressure is the pressure in the reservoir fluids necessary to sustain a column of water to the surface.[1] Normal pressures range between 0.43 and 0.50 psi/ft. Normal drilling muds weigh about 9 ppg (pounds per gallon) and exert a bottom hole pressure of approximately 0.47 psi/ft of depth.

By convention in the petroleum industry, overpressure refers to pressures higher than normal that require heavy drilling mud to keep formation fluids from entering the borehole. Pressures lower than normal are called subnormal.

Figure 1 Schematic diagram showing the location of abnormal pressures in southern Louisiana. The continental and deltaic facies contains sandy beds. The nerltic (nearshore) facles contains a few silty and sandy beds that connect laterally to the deltaic facies. The outer shelf facies contains almost no sandy beds, and the pore fluids cannot escape. The growth faults are seals that stop the lateral flow of pore water toward the neritic facies.[2]

Notable effects of overpressured reservoirs that are costly include the following:

When drilling in areas where overpressured zones are known to occur, it is necessary to be aware of both the pressure of the fluids in the pores and the pressure at which the formations will fracture. It is not enough simply to drill with heavier mud to prevent blowouts. If the mud is too heavy, the formation will rupture and lost circulation will result. It is usually impossible to determine these critical pressures in a new area in advance of drilling.

Geological cause of overpressured reservoirs

There is considerable debate and literature on the causes of overpressure. This section outlines some common explanations.

The most commonly accepted cause of overpressure is arrested compaction of shale. Compaction requires the expulsion of pore water. When clays first start to compact, they are quite permeable and most of the water moves upward. As compaction continues, however, the clay flakes become parallel, reducing vertical permeability. Sands and silts compact less than clays and shales and can maintain permeability to greater depths.

As long as there is a silty or sandy bed within a few feet of the shales, the shales continue on a normal compaction trend. However, if no sandy beds are present, the water remains in the shale pores. As additional overburden is deposited, the shale then has to sustain all or part of the additional weight. This results in high pressure in the shale pore water. If there is a small, isolated sand body enclosed by the shale, whatever fluid it contains (water, oil, or gas), will share the same pressure. The fact that overpressures have been maintained for hundreds of millions of years over small vertical intervals indicates that the permeability of the enclosing shales can be virtually zero.

The distribution of reservoirs and overpressuring is strongly controlled by the depositional environment (Figure 1). Overpressured reservoirs are commonly found where there are thick deposits of shaly sediments. 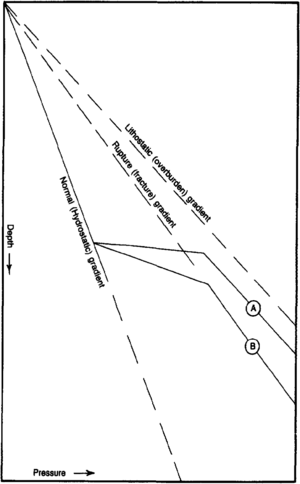 Figure 2 Common patterns of increasing pressure with depth. In the case illustrated by line A, the pressure increases normally to a certain depth, then increases abruptly to almost the weight of the overburden, which it then parallels. In the case of line B, the increase of pressure above normal follows the aquathermal gradient (constant water density) and then follows the fracture gradient.[3]

Aquathermal effects also cause overpressure. The temperature increases as sediment is buried, causing an increase in the volume of water. This in turn results in an increase in pressure if the sediment is sealed by an impermeable layer.[4]. For example, if a shale is totally sealed and there is no dilation to increase the pore volume, and if the geothermal gradient is 25°C298.15 K
77 °F
536.67 °R per 1000 m3,280.84 ft, then the pressure increase is about 1.8 psi per ft. This is more than the increase in weight of the overburden. Consequently, this aquathermal pressuring will cause an increase of pressure up to the pressure at which the rocks fracture (Figure 2).

Pressure data from some U.S. Gulf coast wells suggest that the aquathermal effect is important.

Tectonic phenomena also produce overpressures. In the Gulf of Alaska, fluid pore pressures up to 0.85 psi per ft were found due to horizontal compressive stress in the rocks. In Western Alberta, large thicknesses of Paleozoic carbonates have been thrust over soft Cretaceous shales, resulting in overpressuring of the lenticular oil-bearing sandstones that extend under the overthrust (such as Leafland and Pembina).

Other suggested causes of overpressuring include the loss of water in smectite clay as it changes to illite, osmotic pressures due to salinity variations in the water, and effects of cementation.

Interval velocity can be determined from the surface by the common depth point method of seismic acquisition. If interval velocity increases normally with depth and then decreases, it is possible that a zone of overpressure exists. This method of predicting the depth to an overpressured zone has been widely used, especially in the offshore Gulf coast of the United States.

Detection of overpressure while drilling

Because lithology, rotary speed, and weight on the bit also affect drilling rate, a corrected drilling rate called “d exponent” should be used (Equation 1). This method can be one of the most reliable indicators that the drill is penetrating a zone of abnormally high pressure.

A rising level of mud in the tanks indicates that more mud is coming out of the hole than is going in. This is called a “kick.” This happens because formation fluids are entering the hole and the well is threatening to blow out. The situation is extremely serious, and proper steps must be taken to get the gas, oil, or water out of the hole. The most common method is to close the blowout preventers and stop the pumps. After a few minutes, the pressure at the top of the drill pipe will equal the pressure in the formation minus the weight of the column of mud. This is the excess pressure that must be balanced by increasing the mud weight. The pumps are then started to circulate the extraneous fluid out of the hole. The drill pipe pressure is carefully controlled with the choke. If the equilibrium drill pipe pressure is exceeded, the well may lose circulation, and if it is too low, the well will blow out.

Several other indications of overpressure may occur after the lag time necessary for the mud to return to the surface from the bottom of the hole. They are much less reliable than the drilling rate, but can be monitored by mudlogging equipment. These indicators include the following:

Detection of overpressure with well logs

Undercompacted shales associated with overpressured zones have a much lower electrical resistivity than normally compacted shales (Figure 3). According to the Archie formula, doubling the porosity of a shale from 10 to 20% should cause its resistivity to drop to one-fourth. As a result, it is possible to determine accurately the degree of undercompaction of a shale from its resistivity and to estimate the pore pressure (Figure 4).[7]

Because undercompacted shale has slow seismic velocity and low density, a high pressure zone can also be identified from sonic and density logs.[8]

Note that as is always the case with well logs, there are pitfalls in interpretation, and the local geology and hole conditions must be taken into account.

Subnormal reservoir pressures, that is, pressures less than 0.43 psi per ft of depth, are very common.[9] The cause of abnormally low reservoir pressures is not well understood. If a reservoir containing either gas or oil is isolated and then subjected to uplift and erosion, the removal of overburden causes an elastic rebound of the solids and an increase in volume of the pores. The elastic dilation of sandstones is about 7 × 10–6 volumes per psi. Water expands only 3 × 10–6 volumes per psi, so that the pressure of the pore water in the aquifer and the enclosing shales will drop, possibly sucking some of the water out of the aquifer. Most low pressure reservoirs are in areas where there has been uplift and erosion since the sediments forming the reservoir were deposited and lithified.

If the reservoir pressure is much lower than the pressure in the drilling fluid, severe formation damage can occur. The drilling mud filtrate penetrates the reservoir, causing swelling and migration of clays, which may plug the pore throats. Even a little water in the hole can kill a low pressure producing gas well. The water is drawn into the pores by capillarity and ruins the relative permeability to gas. In the case of low pressure gas sandstone reservoirs, it is desirable to set casing at the top of the reservoir interval and drill with gas, salt water, or oil-based mud to minimize formation damage.

Also, if the gas reservoir has a low pressure, there may be no indication of gas on the mudlog. The logs of many abandoned dry holes should be reexamined to look for bypassed gas zones.