The table below lists steps for a geometrical analysis of the sedimentary section of a basin in seismic sections, outcrop sections, and well log sections.

Unconformities are third-order sequence boundaries. They are generally regional onlap surfaces. In basinal settings, they are characterized by onlap of allochthonous deposits (i.e., debris flows, slump deposits, turbidites), prograding deltas, carbonate platform deposits, or evaporites. In shallow-water or nonmarine settings, they are characterized by onlap of strata deposited in fluvial, deltaic, or nearshore marine or peritidal environments.[1] We can identify unconformities using stratigraphic evidence and individual well evidence. 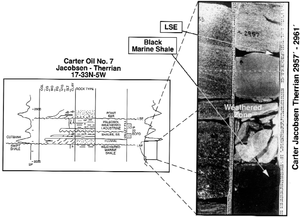 Cores and samples should be examined for evidence of unconformities. These unconformity surfaces should then be calibrated to logs. Logs can then be used to correlate the surfaces to seismic and to other wells. Figure 1[3] shows an example of calibrating unconformity evidence from cores to logs. The Lower Cretaceous Cutbank Sandstone unconformably overlies the Jurassic Swift Formation. A major lowstand surface of erosion (LSE) is shown at 2957 ft901.294 m (901 m) and was identified using the following criteria: