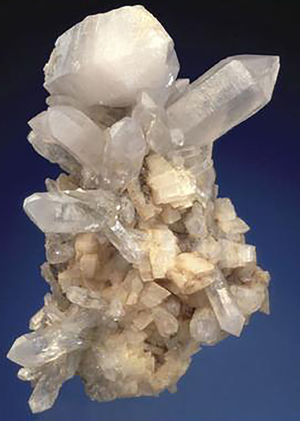 Quartz (SiO2) is the most abundant mineral in terrigenous sedimentary rocks and is exceedingly durable (surviving multiple generations of weathering and deposition). Quartz and silica occur in many varieties—true quartz in the form of megaquartz, chert, microquartz, or chalcedony and various other forms of silica, mainly opal (opal-A and opal-CT [cristobalite]).

Color: Typically clear, but cloudy and colored varieties occur where crystals are especially rich in water or mineral inclusions. In thin section, these colors are rarely seen, although red and pale brown varieties related to included hematite and limonite are sometimes found.

Cleavage/fracture: No cleavage, but fractures and healed fractures can be common.

Other: No twinning; may contain trains of water, gas or mineral inclusions including ones, such as rutile and tourmaline needles, that may provide clues to grain provenance. Optical behavior varies based on deformation history; grains can have undulatory (undulose or sweeping) or nonundulatory (nonundulose or straight) extinction. Quartz grains commonly have syntaxial quartz overgrowths that form diagenetically.

Minerals that may have similar appearance

Feldspars: Commonly show some cleavage, more alteration (vacuolization, sericitization, partial to complete dissolution), presence of characteristic twinning patterns and are biaxial. Can be differentiated by staining.

Apatite: Normally lower birefringence, has a higher relief and is uniaxial (-).

Gypsum and barite: Both have birefringence similar to quartz, but barite has slightly higher relief and gypsum has lower relief; both gypsum and barite have strong cleavage.

Zeolites: Numerous zeolite minerals can be confused with fibrous varieties of quartz. Most of the common zeolite minerals are biaxial (+/) and most have somewhat lower birefringence than quartz. 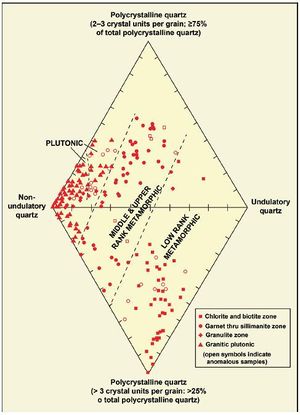 Quartz can occur as single crystals or polycrystalline aggregates that may provide clues to the provenance of the grains, but quartz is common to most rock types other than basalts (see the table below). Semicomposite and polycrystalline quartz can be found in metamorphic and plutonic rocks as well as hydrothermal vein deposits and fractures. For metamorphic quartz, the size of the crystals may represent increasing metamorphic grade; larger crystals form under higher temperatures and pressures (Figure 1).

Chert and opaline silica can be found in either sedimentary or volcanic rocks — in the former as direct precipitates and in the latter as recrystallized glass.

Amphiboles (actinolite and others): metamorphic, intermediate to mafic igneous rocks and skarn deposits.

Titanium minerals (such as rutile, titanite, anatase and others): metamorphic rocks, pegmatites and hydrothermal vein deposits.

Hydrocarbons, bitumen and methane: trapped during growth of the quartz crystals from fluids containing organics. These can sometimes be used to reconstruct basin temperature and fluid histories. 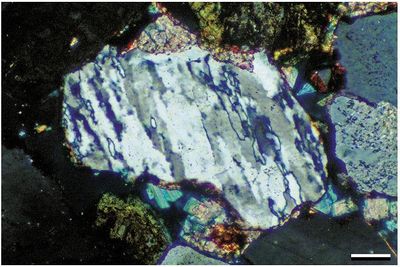 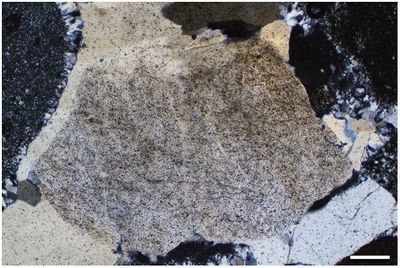