The quality of a reservoir is defined by its hydrocarbon storage capacity and deliverability. The hydrocarbon storage capacity is characterized by the effective porosity and the size of the reservoir, whereas the deliverability is a function of the permeability. Effective porosity is the volume percentage of interconnected pores in a rock. The remaining space in the rock is occupied by the framework or matrix of the rock and, if present, nonconnected pore space. Common porosity types in sandstone and carbonate rocks are listed in Table 1 (also see Porosity).

The permeability of a rock is a measure of the rock's ability to transmit fluid (see Permeability). Permeability, measured in darcies, is a function of the size, shape, and distribution of the pore channels in the rock, the type and number of fluids present, the fluid flow rate, the length and cross-sectional area of the rock, and the pressure differential across the length of flow.

The initial pore network of newly deposited sediments and the quality of shallow buried reservoirs are generally determined by the environment of deposition (see Lithofacies and environmental analysis of clastic depositional systems). This dictates the grain characteristics, which in turn control porosity and permeability. In clastic rocks, these characteristics include grain size and sorting, sphericity, angularity, packing, and the abundance of matrix materials. The best reservoir quality rocks are well-sorted, have well-rounded grains, and contain no matrix material.

Sedimentary structures affect initial reservoir quality by imparting a preferential flow pattern in the reservoir. Planar bedding, laminations, or other stratification features can create stratified planar flow, especially if permeability barriers such as clay partings, finer-grained laminae, or graded beds are present. Slump structures may reduce permeability by creating a tortuous flow path, or may increase permeability (and porosity) by causing a looser grain packing and by producing small faults. Bioturbation typically decreases reservoir quality by mixing adjacent sands and clays, introducing the clay into the interstices among the sand grains.

Compaction reduces the porosity and permeability of a rock by causing the following: (1) grain rotation and rearrangement into a tighter packing configuration, (2) plastic deformation of ductile grains that flow into adjacent pores and pore throats, (3) fracturing and crushing of brittle grains, and (4) pressure solution in the form of grain suturing and stylolitization.[1] Rocks that contain mechanically labile grains, such as clay clasts, altered rock fragments, or delicate fossils, are likely to experience a reduction in porosity and permeability as the ductile grains plastically flow into adjacent pore spaces. Brittle grains will fracture, shatter, or in the case of some fossils and porous grains, collapse. A rock that consists of a framework of strong minerals, such as quartz, tends to undergo only minor porosity and permeability reduction during compaction due to grain rotation and rearrangement into a tighter packing configuration.

Cementation, the filling of original pore space by cements, may occur early or late in the diagenetic history of a rock.[2][3] Table 2 lists some common cement types. Precipitation of authigenic minerals usually reduces reservoir quality; however, early formation of some authigenic minerals can preserve the original porosity by protecting the rock from later degradation by compaction or cementation.[4]

Dissolution of less chemically stable minerals in sandstones and carbonates can sometimes significantly increase both the rock porosity and the permeability.[5] Dissolution tends to be especially important in carbonates that are buried to shallow depths and sandstones that are deeply buried.

Recrystallization of carbonates and the alteration of grains and cements to clays can have a significant impact on reservoir quality in sandstones and carbonates. Dolomitization of limestones or calcite cement in sandstones typically increases porosity and permeability. Similarly, clay replacement may increase overall porosity of the rock; however, the pores associated with clay minerals tend to be micropores that contain irreducible water. Also, delicate clay flakes may become mobile with flowing pore fluids and migrate to, and clog, pore throats.

Fracturing and brecciation associated with folds, faults, and diapirs generally increase the reservoir quality of well-indurated rocks (see Evaluating fractured reservoirs). Fracture porosity is typically low, usually providing only about 1% porosity; however, fractures in large reservoirs may hold considerable reserves. Fracture permeability may be as high as tens of darcies and is directional in nature. Conversely, fractures filled by mineralization or with gouge may produce a permeability barrier in the direction perpendicular to the fracture. Brecciation along fracture or fault zones may occur due to shearing or dissolution and collapse. Except where mineralization has occurred in the breccia, brecciation can increase both porosity and permeability considerably. Closely spaced sealing faults can significantly compartmentalize a reservoir.

Wettability in an oil reservoir controls reservoir quality by affecting the amount of water production. When the reservoir rock is oil-wet, water is located in the central portion of the pores and will flow through the pore system with the oil. Conversely, in a water-wet reservoir, the water is restricted to the perimeter of the pores and will not flow through the pore system until much of the oil has been removed. In addition, the irreducible water saturations of oil-wet reservoirs tend to be much lower than those of water-wet reservoirs.

Modern three-dimensional seismic data[6] can sometimes assist in predicting reservoir quality away from well control. Careful processing of seismic data allows a conversion of the seismic reflection amplitudes to estimates of acoustic impedance. Because lithology, porosity, and fluid saturations affect the acoustic impedance of a rock, a relationship can then be established between the seismic estimates of impedance and the rock properties determined from the logs or in the laboratory. (For information on comparing seismic data to rock properties, see Seismic inversion.)

Wireline logs can be classified into three different groups based on the information they provide: (1) lithology indicators—gamma ray, sonic, density, and neutron logs, (2) porosity logs—sonic, density, and neutron logs, and (3) fluid saturation logs—resistivity logs.[7] (For more on the information that wireline logs can provide, see Standard interpretation.)

In addition to lithology, porosity, and fluid saturations, permeability sometimes can be inferred from log responses or a combination of log responses. The spontaneous potential log is most often used as a qualitative indicator of the permeability of a formation. (For more on wireline log response to reservoir properties, see Quick-look lithology from logs.)

Another macroscopic technique used to determine reservoir quality is drill stem testing (DSTdrill stem test) or formation testing. A drill stem test is generally performed after the well has been conditioned by sealing the zone(s) of interest and allowing the production of fluids (see Drill stem testing). The fluids are tested for hydrocarbon content and the pressures and flow rates are measured. The permeability can be inferred from the pressures measured over time, and the productive capability of the formation is determined from the types of fluid produced and the flow rates.

Capillary pressure can also be measured in the laboratory on core samples.[9] Various techniques are used to determine fluid saturations in the sample at various pressures so that a saturation profile at different pressures is created, which characterizes the irreducible water saturation and hydrocarbon pore volume of the rock. 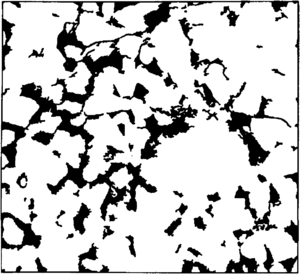 Another microscopic method of assessing reservoir quality is through the use of scanning electron microscopy (SEM) with energy-dispersive X-ray. The SEM allows examination of a reservoir rock at very high magnifications with an excellent depth of field so that the pore network and clay minerals within the pores can be viewed. Energy-dispersive X-ray analysis provides an elemental analysis of the grains, cements, and clays identified by the SEM and is used to aid in determining the mineralogy. Such analysis is extremely important in evaluating the potential for formation damage by introduction of potentially reactive stimulation fluids.

Petrographic image analysis[10] is a relatively new technique that provides porosity and permeability values and capillary pressure curves for sandstone samples that are not suitable for conventional core analysis, such as cuttings, percussion sidewall cores, and unconsolidated core samples. Image analysis measures key two-dimensional geometrical characteristics of the pore network in thin section using a research-grade petrographic microscope coupled with an image analysis system. The system generates a binary image representing porosity and rock material from thin section views of undamaged portions of the sample (Figure 1). From this image, pore area, diameter, perimeter, length, width, and aspect ratio can be analyzed and related to the three-dimensional porosity, permeability, and capillary pressure values that have been measured on conventional core samples.