Economic analysis of contemplated oil and gas ventures must be carried out on the assumption that the project is successful, with "success" often being expressed as one of several levels of profitability based on the various ranges in geotechnical and economic parameters that impact project commerciality. However, many exploration ventures do not succeed, and not all development wells and projects succeed either, so the consequences of such failure must be considered in appraising the economic merit of a proposed development venture.

Accordingly, the expected value (EV) of any venture can be expressed as follows:

If you were able to play such a game "for free," the expected value of each trial would be +$10,000. If you had to pay $10,000 each time you played, the EV would be zero, so that, statistically, you then would be "trading dollars." If you were willing to invest $8,000 in one trial of this game, the EV would be +$2,000 (Table 1). In this example, there are only two possible outcomes and you are betting on one trial. It is important to emphasize that in oil and gas exploration, there are many possible outcomes. Furthermore, the concept of expected value as a decision criterion requires repeated trials. The expected value is the average profit per decision assuming repeated trials are made.

Faced with choosing among several options, the decision rule is to select the option having the highest EV. Remember, one alternative is to invest in a risk-free project having some minimum return (net present value = 0 discounted at a risk-free interest rate). Obviously, when operators choose to participate in ventures having negative expected values, they are "betting against the House."

In exploratory ventures, cost of failure usually includes dry hole cost, cost of lease bonuses of the condemned leases, and some G & G costs. For development ventures, some substantial additional capital investments may also occur, plus expense items that will have to be written off as well—expenditures that were needed to determine the viability of the project, such as several completed wells, equipment, materials, and supplies.

Every expression in the expected value equation requires a responsible geotechnical estimate. Uncertainties impacting reserves, revenue, and costs addresses procedures for estimating reserves (the primary component of revenue) and costs (both of success as well as failure). Here we address the problem of assessing the chance of geological success.

For exploratory prospects (including shallow pool, deeper pool, and extension wildcats, commonly managed by development geologists), the recommended procedure is for the geotechnical professional to express his or her confidence independently in four critical geological aspects of any prospect:

The voice of experience warns you that for exploration projects, do not use probabilities of 1.0—you simply cannot be that sure! "Absolute certainty" is 0.9 or 0.95.

The next step is to multiply the decimal fractions representing the four geological chance factors, which produces the probability of geological success, or Psg.

The probability of success and—by subtracting it from 1.0—its derived counterpart, the probability of failure, or Pf, are the expressions required to calculate the expected value of an exploratory drilling venture. A further modification is necessary for development wells and projects.

When compared with exploration drilling statistics, such as those reported annually by the AAPG Committee on Statistics of Drilling (CSD), Ps was approximately equivalent to their definition of success, that is, that the subject well was completed and did produce some hydrocarbons. This does not mean that the venture was profitable. In fact, this definition of success contains at least four possible outcomes:

Contemporaneous drilling statistics serve to put all this into proper perspective, as shown in Table 2, which reports 1988 results by different classes of wells.

For exploration ventures, the recommended method to assess the chance of commercial success is to first identify the minimum field size associated with your firm's definition of the threshold of commerciality, and then to determine what proportion of such fields occur in the natural population of counterpart accumulations in the subject trend, play, or basin. This requires the geologist or engineer to construct a field size distribution, as previously discussed.

For a given extension project having a predicted mean reserve size of 1,500,000 BOEbarrels of oil equivalent, blow out equipment, the geologist has concluded that the probability of reservoir rock is 0.9, the structural probability is 0.8, and the probability of hydrocarbon charge is 0.9. The chief geological risk concerns whether a key fault will or will not seal, and the geologist assesses this as a 50/50 proposition. Thus, the perceived chance of geological success is 32%. However, construction of a field-size distribution for 20 analogous fault-separated fields in the trend reveals that only 3/4 of them are larger than 200,000 bblbarrels, which is the minimum economic field size in this trend for your firm. Therefore, the chance of commercial success is 0.75 × 0.32 = 0.24. Calculated in this way, 0.24 represents the chance of finding a field of 200,000 bblbarrels or larger.

In development projects, just as in exploration projects, the geological chance factors must be derived from the study of maps, cross sections, and well data. They cannot be "pulled out of the air." However, there is an important difference: the fact that development is contemplated at all implies that a petroleum accumulation exists, so the hydrocarbon charge and seal/trap requirements have generally been satisfied. The only remaining geological risks have to do with (1) structural variations that may depress the reservoir below the oil-water contact and (2) stratigraphic variations affecting both thickness and quality of the reservoir section.

For enhanced oil recovery projects, the geologist or engineer is well advised to anticipate ranges in final project or process efficiency when constructing future scenarios. In addition, project commerciality may be severely impacted by future negative (or positive) trends in nongeological factors, such as costs, wellhead prices, transportation problems, and time delays. Thus, these contingencies should also be anticipated and expressed probabilistically. Therefore, the probability of commercial success for a development project should have three components: (1) geotechnical, (2) operational, and (3) economic. A key parameter here is the minimum acceptable economic threshold for project performance.

Accordingly, the chance of project success becomes the probability of achieving the minimum acceptable return (or higher). This is related to the probability of finding at least some minimum reserves capable of producing at some minimum rate. At reserves greater than this minimum, the project will be commercial. Thus, the calculation of expected value for development projects is

The expected value concept also has important applicability in the analysis of complex and sequential decisions. Here the basic idea is to "map out" the sequence of events, indicating decision and chance nodes as follows:

Probabilities must be assigned to all possible outcomes emanating from chance nodes, but not to branches from decision nodes. Risked values are assigned to each foreseen decision. Decision trees are constructed from left to right and solved from right to left.

Theoretically, the basic decision rule is to always choose the branch having the highest expected value. In practice, however, capital-constrained companies often select a less desirable option due to capital requirements of a higher EV alternative. 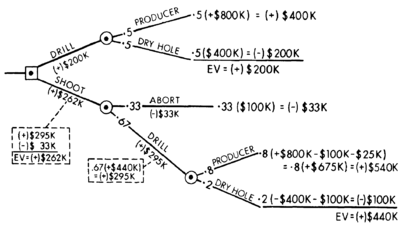 Figure 1 shows a decision tree for a simple development well problem. The problem here is whether to drill a well at the edge of a developing oil field or to shoot a seismic line first to try to determine whether the location may be structurally low and wet and thus move the drill site to the most favorable location. There is also uncertainty about reservoir quality, which cannot be resolved without drilling. The costs in this example are as follows: cost of seismic ($100,000), cost of deferring production to allow time to shoot, process, and interpret seismic ($25,000), cost of dry hole ($400,000), and mean present value of producing well ($800,000, including drilling costs). An analysis of this problem shows two options: