Near wellbore permeability reduction, that is, formation damage, can result from the interaction of the reservoir rock with extraneous drilling, completion, stimulation, or enhanced recovery fluids. Rock-fluid reaction can occur from any of the following operations:

Mineral fines that contribute to permeability reduction can be composed of clay, quartz, feldspar, or carbonate. Nonclay fines have no significant surface charge, and commercial clay stabilizers will not prevent their migration. Detrital clays forming the rock framework normally have little impact on rock-fluid reactions. Authigenic clays, however, line, fill, or bridge pores. They are exposed to extraneous pore fluids with which they may react.[4] Expanding clays (smectites and mixed layer clays containing smectites) can reduce cross-sectional areas of pore throats and thus permeability. More important, as they expand, they often contribute mobile fines. These fines along with illite and kaolinite (which have lesser to no swelling tendency) are the primary materials that disperse, migrate, bridge, and impair permeability.

Table 1 summarizes potential rock fluid reactions based on knowledge of clays present, damage prevention, and corrective procedures.[5] Prevention is preferred and, when possible, is likely to cost less than correction.

Laboratory tests used to assess rock-water reactions can be grouped into three categories:

Petrographic analysis indicates the potential for permeability reduction by identifying types, amount, and location of clays and other minerals. (For details on petrographic methods, see Thin section analysis and SEM, XRD, CL, and XF methods.) 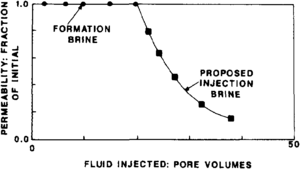 Capillary (water retentive) properties of rocks are altered by rock-fluid reactions. Capillary curves before and after exposure to extraneous fluids indicate if rock-fluid reaction has reduced pore sizes. If reduction occurs, retained water saturation is increased.[6]

When the source and composition of brine to be injected is unknown, water shock tests indicate potential rock damage and present a worse-case scenario. Permeability of the formation rock to a 0.51-M (3 wt. %) NaCl solution is followed by permeability to freshwater. Sensitive rocks will show permeability reduction. Rock-water reaction must be evaluated for all aqueous fluids introduced into the reservoir system. Critical salinity (cation concentration) below which damage occurs, as well as schemes to lower brine concentration stepwise so as to avoid clay damage, can be evaluated in the laboratory. 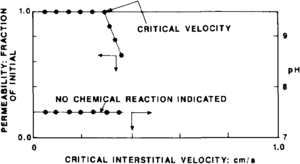 The critical interstitial velocity at which permeability reduction due to fines migration is initiated can be determined in laboratory tests. These tests simulate the effect of high flow rates that exist near the wellbores of both injection and production wells. Muecke[7] discusses factors controlling fines movement. These include fluids flowing, fines wettability, and interfacial forces.

Figure 2 illustrates laboratory data that established a critical flow velocity of 0.3 cm/sec. Beyond this rate, fines were mobilized that bridged at pore throats and resulted in reduced permeability. The pH of the effluent was monitored throughout the test. The constant pH value indicated that no chemical reaction was occurring between the rock and fluid and that viscous forces were the cause of the reduced permeability.

The critical flow velocity is normally obtained by testing a cylindrical sample, with flow parallel to the linear axis. The linear velocity can be scaled to the radial flow condition existing in the wellbore. The scaled data yield the maximum well flow rate in barrels per day that can be tolerated before fines bridging and loss of production rate occurs.[8] These data allow calculation of the radius of the permeability impaired zone and aid in sizing subsequent acid volumes required to clean up the impairment.

Test conditions should mirror the field condition under study. Thus, water injection tests should be made on reservoir rock specimens in which simulated injection brine is flowed in the presence of residual hydrocarbons. Oil or gas production tests should be made by flowing the appropriate hydrocarbon through the rock specimen with interstitial water present. Drag forces are proportional to both rate and viscosity; therefore, flowing fluid viscosities should also model reservoir values.

Changes in pH indicate fluid-fluid or rock-fluid reactions; therefore, monitoring of injection and produced water pH should be an integral part of any critical velocity determination. In addition, effectiveness of clay stabilizers should be evaluated as an extension of the critical velocity measurement.

Chemically initiated fines migration occurs when authigenic clays are contacted by fluid that (1) has an inadequate total cation (Na+, K+, NH4+, Ca2+, Mg2+, Ba2+, and Sr2+) concentration to prevent dispersion of formation clays or (2) contains an inadequate percentage of divalent cations (Ca2+ and Mg2+), even when total cation concentration is high. Clay dispersion is a complex phenomenon dependent on clay type and quantity and the brine composition of both original formation water and extraneous water.

Chlorite exhibits essentially no water sensitivity. It contains iron and it can react with spent HCl acid if the pH rises above 1.0. A pore-plugging ferric hydroxide precipitate with a hydrated gel-like structure can form unless an oxygen scavenger and iron-chelating or iron-sequestering agents are used.

Cation species and valence, as well as total cation concentration, influence clay swelling and flocculation. Divalent cations are more effective in promoting flocculation than monovalent cations, and small quantities of Ca2+ or Mg2+ have stabilizing effects.

Common monovalent ions include K+, NH4+, H+, and Na+. Sodium (Na+) is the least effective ion in promoting clay stabilization and will increase clay sensitivity if the clays are subsequently exposed to freshwater. Illite and mica are potassium (K+) rich. Their stability requires that K+ be present in injected waters to prevent potassium extraction from illite or friable micaceous sands. Ion extraction can result in dispersable particles.[10]

Calcium chloride brine is incompatible with formation or injection brines containing CO32–, HCO3–, or SO42–. Consequently, scale inhibitor must be used or a suitable (normally higher concentration and more costly) substitution of KCl or NH4C1 brines will suffice. Another alternative is to displace the noncompatible water with a slug of KCl or NH4C1 and follow this with CaCl2.

The contact of calcium or potassium fluids with low concentration, spent HF acid used for stimulation of sandstones will also form damaging precipitates. NH4C1 can be used to displace spent HF acid several feet into the formation prior to CaCl2 or KCl treatment, thereby preventing acid reaction with Ca2+ or K+. Conversely, HF acid should not be allowed to contact calcium-bearing minerals such as calcite or dolomite. It is necessary to use HCl as a preflush or cation exchange Ca with an NH4C1 preflush. Only underreaming or fracturing will correct calcium fluoride precipitate damage.

Abrupt changes in salinity shock smectite, mixed layer illite-smectite and chlorite—smectite and to a lesser extent illite. Shock results in clay swelling and permeability decline. Nonswelling kaolinite can also be sensitized by contact with freshwater, which results in fines migration. A stepwise dilution of injection brine reduces total salinity, while maintaining the ratio of divalent to total cations. This gradual change can prevent clay damage.[11]

Cation exchange can strip divalent cations from injection waters. If the resultant divalent ion concentration falls below the level required to keep clays flocculated, major permeability impairment will result. Pretreatment of the near-wellbore region with CaCl2 (or KCl or NH4C1 solutions if Ca is not compatible) can prevent subsequent damage. The pretreatment should be of sufficient volume to reach at least 5 ft1.524 m
60 in into the formation.

The rate of permeability impairment has been summarized Coskuner and Maini, 1988[citation needed] and shown to decrease with increasing temperatures up to 200 T when brine flows in the presence of oil. It has also been shown that higher temperatures require higher salt content to stabilize clays when only brine flows. Solubility of quartz increases with temperature, and additional fines can be released and mobilized. It is prudent to make evaluation measurements at temperatures expected to exist at operating conditions.