Surdam et al.[1] define diagenetic zones by subsurface temperatures. Depending on geothermal gradient, depths to these zones can vary. The table below summarizes major diagenetic processes and their impact on pore geometry. 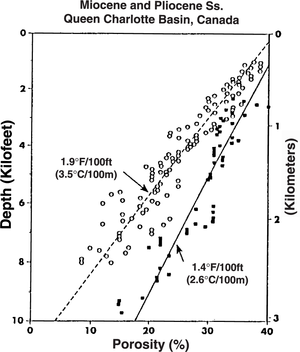 Depending on geothermal gradient, the effect of temperature on diagenesis can be significant. Many diagenetic reaction rates double with each 10°C283.15 K
50 °F
509.67 °R increase (1000 times greater with each 100°C373.15 K
212 °F
671.67 °R).[2] Increasing temperatures increase the solubility of many different minerals, so pore waters become saturated with more ionic species. Either (1) porosity–depth plots of sandstones of the target sandstone that are near the prospect area or (2) computer models that incorporate geothermal gradient are probably best for porosity predictions.

The main effect of pressure is compaction. The process of porosity loss with depth of burial is slowed by overpressures. Basing his findings mainly on North Sea sandstones, Scherer[3] notes sandstones retain approximately 2% porosity for every 1000 psi6,894.757 kPa
6.895 MPa
68.046 atm of overpressure during compaction. He cautions this figure must be used carefully because the influence of pressure on porosity depends on the stage of compaction at which the overpressure developed.

In general, sandstones lose porosity with age. In other words, porosity loss in sandstone is a function of time. According to Scherer,[3] a Tertiary sandstone with a Trask sorting coefficient of 1.5, a quartz content of 75%, and a burial depth of 3000 m9,842.52 ft probably has an average porosity of approximately 26%. A Paleozoic sandstone with the same sorting, quartz content, and burial depth probably has an average porosity of approximately 13%.