The seismic data written to tape in the dog house, whether on land or at sea, are not ideal for interpretation. To create an accurate picture of the subsurface, we must remove or at least minimize artifacts in these records related to the surface upon which the survey was performed, artifacts related to the instrumentation and procedure used, and noise in the data obscuring the subsurface image. Treatment of the data to achieve these ends is commonly referred to as seismic data processing. Through processing, the huge volumes of data taken in the field are reduced to simple images for display on paper or the work station screen. This simple image, while it contains less data about the subsurface, is readily accessible to the interpreter and has many of the artifacts and errors just listed removed. Figure 1 shows a single, unprocessed (raw) field record taken from a line. Figure 2 is the same line of data after processing to illustrate how the field records are turned into an interpretable image. 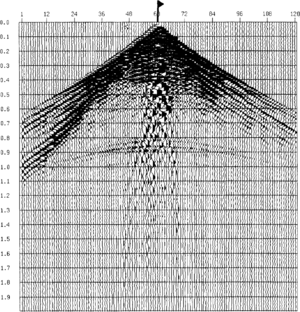 Figure 1 A single shot record as it is recorded in the field. The shot is at station 60. There were 120 geophones laid out in this “split” spread. Two seconds of data were recorded. © Landmark/ITA. 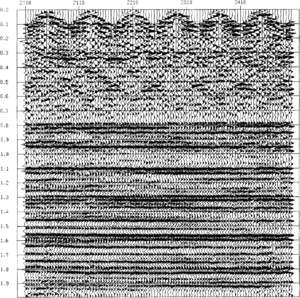 Figure 2 A seismic section produced by processing six shots such as those in Figure 1. © Landmark/ITA.

The processing sequence designed to achieve the interpretable image will likely consist of several individual steps. The number of steps, the order in which they are applied, and the parameters used for each program vary from area to area, from dataset to dataset, and from processor to processor. However, the steps can be grouped by function so that the basic processing flow can be illustrated as follows:

Given the broad categories of processing functions just described, this section briefly defines the common programs by their generic names in the order they would normally be applied. Some steps may be applied more than once at different times in the sequence, while others may be skipped for a particular dataset.

The name given to sorting the traces from time ordered storage (all receiver stations at a given time) to receiver ordered format (all times for a given receiver) or trace sequential format. Many modern instruments do this in the field, but much data still comes in from the field multiplexed. SEG A and SEG B formats are multiplexed, SEG Y is a trace sequential format, and SEG D can be either way.

The process of flagging traces or pieces of traces to be ignored for one reason or another.

The association by unique identifier of each recorded trace with shot and receiver locations.

A low pass filter applied before resampling the data to a coarser time scale to prevent aliasing. Aliasing is a phenomenon in which high frequency data masquerades as low frequency energy as a result of undersampling. To sample a signal properly, there must be at least two samples within the shortest period of interest. Antialias filters remove frequencies above the sampling limit (Nyquist frequency) of the new sampling time. The operation is performed before the sampling is reduced.

The correction for the loss in amplitude of a signal as it travels through the earth and spreads its energy over a larger surface area. This involves multiplication of the signal by a number that increases with time. The exact time variant multiplier can be based on the theoretical concept of spherical spreading (related to the square of the distance traveled), can be based on measurements of amplitude decay with time made on the data itself, or can be entirely arbitrary. An example of the effect of gain recovery is given in Figure 3.

The removal of traveltime artifacts relating to the placement of the source and receiver at or near the earth's surface. Differences in traveltime to the same reflector which result from elevation differences and near-surface velocity changes at different source and receiver stations must be removed. The relative elevation of each shot and receiver location and the near surface velocity must be known to make these corrections. An elevation datum is chosen, and the distance above or below that datum is measured for each source and receiver. The difficulty is in knowing what velocity to use to convert this elevation difference to a time correction to be added to or subtracted from the entire trace (hence the term statics). Refraction statics, surface consistent statics, and residual statics are all techniques used to estimate and apply the appropriate velocity and time corrections (Figure 5a and b).

Strong reflections can act as a secondary source of seismic energy that will interfere with the primary reflections and confuse the interpretation. Such secondary reflections are called multiples. The most common are water bottom multiples, but interbed multiples also exist. The demultiple process attempts to remove these[2].

Acoustic signals that are not reflections from subsurface layers appear in shot records (Figure 1) as straight lines rather than hyperbolic curves. These events have a constant “apparent velocity” as they travel along the receiver cable. This simple organization allows them to be isolated from the reflection signal and to be removed from the record. A common way to do this is with the FK (sometimes called pie slice) filter. Judicious selection of the range of apparent velocities to be removed can eliminate linear noise. Too wide a filter can remove too much information from the section and causes serious interpretation problems. 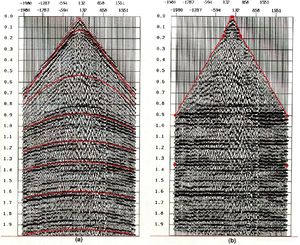 Figure 6 (a) A gather of processed traces with a common surface location. Shot-to-receiver offset is zero at the center of the gather and increases to about 2000 m deep on either end. The offset related curvature of the reflections is due to normal moveout. (b) Normal moveout correction (NMO) has been applied and the horizons are flat. The gather is now ready to be summed or stacked to produce one trace on Figure 2. Copyright Landmark/ITA.

The reflection from a given horizon does not arrive at the same time at different receivers along the length of the seismic cable or spread (see “Seismic Migration”). However, if the velocity at which the sound traveled is known, the arrival time difference (moveout) at each station can be predicted. Conversely, knowing the arrival time difference, the velocity the sound traveled can be determined under certain model assumptions. Usually the velocity of the earth as a function of time is determined at a few locations over the survey. This model can then be used to calculate moveout as a function of time everywhere in the survey. The moveout is subtracted from each seismic record such that the reflections from a given horizon will appear flat. This facilitates identification of reflectors and stacking. Figure 6 demonstrates the NMO process.

NMO corrections are made under the assumption of horizontal planar reflectors. If the reflector has appreciable dip, then the actual movement will be slightly different. The DMO correction is a method for estimating the effect of dip on moveout and removing it from the records as well.

This is the single most effective step for noise reduction in the processing flow. The shooting procedure results in many traces being acquired with the point midway between source and receiver (called the midpoint) being coincident on the earths surface. The only difference between the traces is the distance between source and receiver (offset). Once these traces have been NMO (and DMO) corrected, they are really redundant samples of the same reflection. Adding them together increases the signal to random noise ratio by the square root of the number of redundant samples. The process reduces the field data to a stacked section consisting of one trace for each midpoint location, assumed to have been recorded with a shot and receiver coincident at the midpoint location (see Figure 2).

Usually a band pass filter, this process excludes frequencies above a certain value (high cut) and below a lower value (low cut) to retain that part of the signal with the highest signal to noise ratio. The values are usually set by trial and error and judged by a visual comparison of sections. The values may be different for different time gates of the section. Typically, the deeper reflections (later time) have less signal at high frequencies because these frequencies are absorbed or scattered more readily in the earth. Consequently, a lower value for the high cut frequency must be used as the bandpass is applied to later times on the trace.

This is a simple procedure that averages together adjacent traces to enhance the signal to noise ratio. It causes a concurrent loss in horizontal resolution.

Migration, display and other advanced processing techniques are available and essential to the complete utilization of the seismic data.

Seismic processing attempts to enhance the signal to noise ratio of the seismic section and remove the artifacts in the signal that were caused by the seismic method. The end result should be a more interpretable section. The process has some very subjective elements. The selection of various parameters is done most often heuristically with more emphasis on satisfying the personal taste of the interpreter than on the rigorous physics of signal processing.