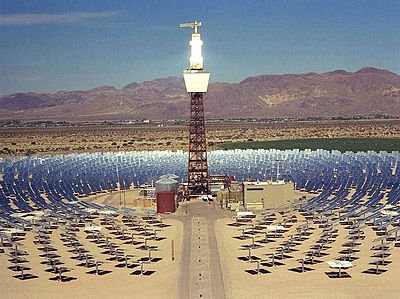 Solar energy is the use of direct sunlight, the solar energy arriving on Earth. The amount of solar energy reaching the Earth is incomprehensibly vast, inexhaustible, and free, but it is intermittent; the sun shines only during the day and is often obscured by clouds, and at high latitudes, days are very short during the winter. Over an entire year, day and night, summer and winter, cloudy and clear, and at all latitudes, only a part of the sun's energy reaches the Earth's surface.

Furthermore, solar energy is diffuse and needs to be concentrated and stored. To collect sufficient amounts of energy, it is necessary in some cases to use large and expensive equipment and great expanses of land that can make the use of solar energy economically questionable and even environmentally objectionable.

Direct sunlight can be used for two main purposes: for heating and cooling and for the generation of electricity.

Solar heating is the oldest and technically most mature use of direct sunlight. Passive solar heating has been used by humans for centuries for warming people and their dwellings, for drying food, and for growing plants in greenhouses. Proper architectural design of buildings to take advantage of sunlight's heat is receiving increasing attention. Several devices (flat-plate collectors, parabolic trough collectors, and parabolic dish collectors) have been in use since the early 20th century for heating water and for space heating in countries and regions of the world where sunlight is prevalent. These devices, however, need some kind of backup for times when there is no sunlight. Space cooling is in a less advanced stage, both technologically and economically, because it requires considerably more complex and expensive systems.

A more recent development in the use of direct sunlight is for the generation of electricity. Two different processes have been developed for this purpose: a thermal conversion process and a photovoltaic (PV) conversion process. The solar thermal conversion process employs a large field of heliostats (two-axis movable mounted mirrors) that track the sun and reflect sunlight into a central receiver at the top of a solar tower. Water in the receiver is converted to steam that operates a turbine generator on the ground, producing electric power. The first experimental electric power plant using this technology (Solar One, near Barstow, California) was shut down in the late 1980s. A second, larger, and more advanced plant, Solar Two, started to operate in 1996 but was shut down in 1999 because of lack of funding. As of 2005, no other plants using this technology are now in operation. The economic viability of this electricity-generation process remains to be proven.

The PV conversion process uses solar cells—solid-state semiconductor devices that convert sunlight directly into electricity, silently and without pollution. The PV process is the simplest, most dependable technology to harness the power of the sun. Solar cells or solar modules are easy to install and, as a result of their simplicity, require minimal maintenance.

Solar PV systems are successfully used today to generate electricity at a small scale in many countries and for many purposes. They are in particular demand where only modest amounts of power are required and in areas remote from electric power plants and without access to electricity grids: highway signs, rural water-pumping stations, remotely located communities and dwellings, space vehicles, and marine or air navigation beacons.

Central large-scale PV power plants cannot economically compete at present with other sources of electricity, even after important breakthroughs in PV technology, and continuing improvement in the efficiency of solar-cell manufacturing in the last 20 years have pushed down the cost of manufacturing PV devices. At present, the price of PV electricity is 5–10 times higher than that of electricity generated in conventional coal, natural gas, hydroelectric, or nuclear power plants. Further refinements in technology and possible increases in the scale of production could decrease the cost of solar cells and improve the potential for PV electricity generation, not only in large plants, but also in individual residences and other buildings. However, it is generally believed that large-scale generation of PV electricity will be more expensive than electricity from other sources for many decades to come, and it is this high cost of PV electricity that has been the major obstacle to its more widespread use (World Energy Council, Survey of Energy Resources, 1995, 1998).

Large-scale use of direct sunlight, either by thermal conversion or by PV devices, also has serious geographic limitations. It requires clear skies, sunny climates, and large expanses of land that would become unavailable for any other purpose. When the sun does not shine, solar PV power installations require backup electrical supplies from conventional sources. Use of sunlight for the generation of electricity is, therefore, better suited for low-latitude and sparsely populated regions. However, large electricity-generating plants in sparsely populated areas far from centers of electricity consumption require massive and expensive electricity storage or long-distance transport of the electricity generated, further hindering the plants' economic viability.

A scheme suggested to overcome these geographic limitations is the placement of large arrays of solar cells in synchronous-orbit satellites 30,000–35,000 km above the Earth. The PV arrays would convert the high solar radiation to electricity, which in turn would be fed to a microwave generation system for transmission to Earth. The microwave transmissions would be collected by large receiving antenna systems and converted to alternating or direct current electricity. The possibility of placing one of these solar power satellites in orbit has received no serious consideration.