A number of surfaces are typically mapped during reservoir development to show closure and other limits to reservoir production. Maps of top of pay and bottom of pay can also be “subtracted” to determine pay thickness. 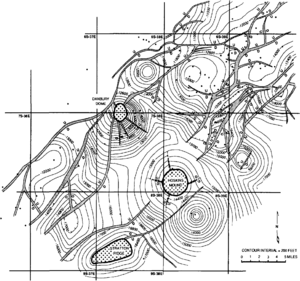 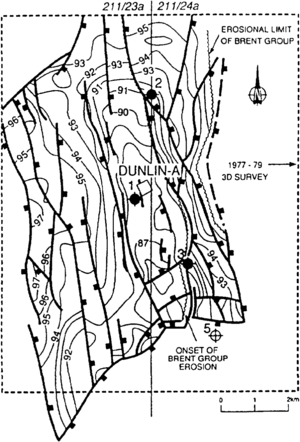 Figure 2 Structure of the base of the Humber unconformity (top of the Brent Group), Dunlin field, U.K. Northern North Sea mapped with 1979 and 1989 vintage data. Contours are marked in ft subsea × 100; contour interval is 100 ft. (From Braithwaite et al.)[4]

Faults are special surfaces whose traces will show on structure contour maps (Figures 1 and 2). Faults form bounding surfaces for some reservoirs, and sufficient well control might exist to contour map the fault surface itself. Projections of subsurface data into the plane of the fault are also useful “maps” for reservoir development, but are more appropriately described as cross sections. (For details of construction of fault plane maps, see Conversion of well log data to subsurface stratigraphic and structural information.) 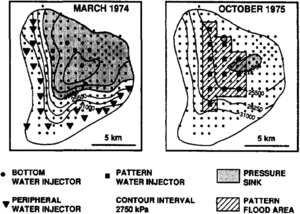 Surfaces of unconformity can be especially useful marker horizons for structure contour mapping (Figure 2). In many fields, unconformities are the location of sealing shales and/or source rocks above reservoir pay. Subcrop maps, traces of productive zones, barriers, or marker horizons mapped on the unconformity surface are invaluable for planning well placement and for reservoir development.

Maps of reservoir pressure are useful throughout reservoir life (Figure 3). Pressures should be converted to a common depth datum, such as mid-reservoir, prior to contouring. (For information on obtaining pressure data, see Production testing and Pressure transient testing, Wireline formation testers, and Drill stem testing.) 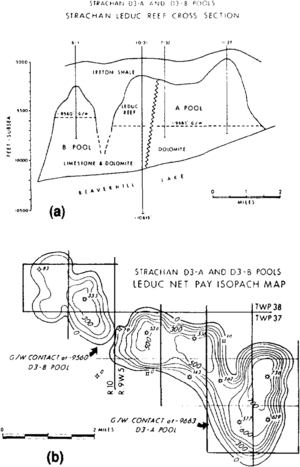 Interpretations of depositional trends, pre- and syndepositional structural development, and reservoir storage capacity are based in large part on thickness information. An accurate meaning of thickness is critical in these and other analyses (see Conversion of well log data to subsurface stratigraphic and structural information).

A contour map of equal values of true stratigraphic thickness is an isopach map (Figure 4). Except for vertical wells in horizontal beds, corrections for wellbore deviation and formation dip are needed to make isopach maps.

A contour map of equal values of true vertical thickness is an isochore map.[7] Note that in common practice, isochore maps are informally referred to as “isopach” maps, a term that properly should be restricted to true stratigraphic thickness.

An isochron map is a contour map of equal values of seismic traveltime between selected events.[7] Isochron maps are the seismic analog of isochore maps and, as such, are intended to derive thickness information from seismic data. Isochroning between events above and below a pay horizon, for example, would estimate pay thickness. Renick and Gunn[8] present a good case history of using isochron and time-structure maps to generate “isopach” and elevation-structure maps. Their isochron-isopach approach delineated reef trends for further development drilling and used well penetrations through a shallow horizon for depth control on a deeper horizon. Phipps[9] documents the pros and cons of using isochron thins and structural highs as exploration drilling criteria for dolomitized Devonian limestones.

When few production performance data are available, typically early in the life of a reservoir, reserves can be calculated by a volumetric analysis (see Reserves estimation). For an oil reservoir, the basic volumetric equation is as follows:

The product A × H is the reservoir bulk volume, and the product A × H × ϕ is the reservoir pore volume. The general determination of bulk reservoir volume involves mapping reservoir area in plan view and mapping net pay in terms of true vertical thickness to provide a common presentation of dipping beds or deviated wells. An isochore map of net pay should be contoured using well control points and interpolated or extrapolated using available seismic and well test data and the geologist's interpretation of depositional and diagenetic history.

“Net” pay (see Effective pay determination) implies that some formation thickness has been excluded from consideration by either (1) occurring below an oil-water contact (or above a gas-water contact), or (2) having porosity and/or permeability values below a “cutoff” limit for productivity. Not all net pay is necessarily productive at a given well spacing. Discontinuous productive horizons between wells might be described, for example, by the concept of net pay to net connected pay ratio.[10] 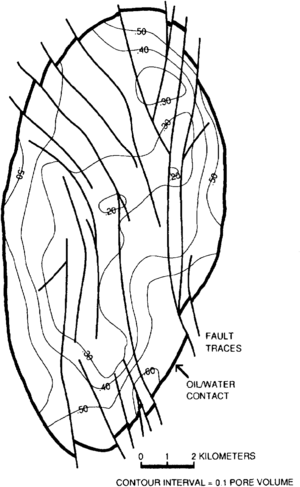 The porosity (ϕ) in a reservoir zone can be determined from log and/or core data. The data in an individual well within the net pay interval can be averaged arithmetically and posted on a map for contouring. The averages should be weighted by thickness.

A variety of maps are used to predict or monitor reservoir performance. 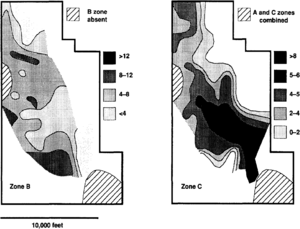 Reservoir storage capacity or porosity thickness (ϕH) is the product of porosity and net pay (Figure 6).

To avoid coning, sand production, pipe collapse, or other harmful effects, wells might not be produced at their maximum wide-open flow rates. Therefore, the ability of a well to produce is usually determined by a productivity index (PI).[12] The PI is a measure of the stock tank barrels (STBstock tank barrels) of oil produced per day per psi drawdown under steady state or pseudosteady state flow conditions. Changes will show on periodic maps of PI during reservoir life indicating trends in reservoir depletion or formation damage.

Engineers forecast ultimate recoverable reserves by applying material balance equations or decline curve analysis to production history records. For example, in a depletion-type reservoir, the solution gas to oil ratio is sometimes plotted versus cumulative oil production on semilog paper.[13] If such a curve shows a good straight-line relationship, the curve can be used to predict the trend of a cumulative gas or cumulative oil plot to estimate ultimate recovery.

The solution gas to oil ratio (GORgas-oil ratio) is the amount of dissolved gas that will evolve from the oil as the pressure is reduced to atmospheric from some higher pressure. GORgas-oil ratio is usually expressed in units of SCFstandard cubic feet gas/STBstock tank barrels oil. A barrel of oil and its solution gas at reservoir conditions of temperature and pressure will usually “shrink” as the fluid is produced and brought to stock tank conditions (normally reported at 60°F288.706 K
15.556 °C
519.67 °R and 14.7 psia). As GORgas-oil ratio changes during reservoir life, GORs for individual wells can be mapped periodically to identify areas of the reservoir receiving or not receiving pressure support and serving as indicators for reservoir management action. 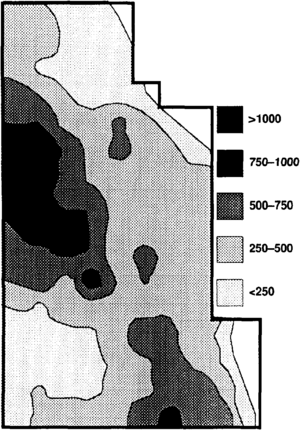 Figure 7 Cumulative oil production map for the A, B, C, and D zones from the San Andres Formation reservoir, Jordan field, Ector and Crane counties, Texas. Contours in MSTB/year/acre. (After Major et al.)[11]

Water cut is the fraction of a liquid production stream that is water, where oil cut = 1 - water cut. Like GORgas-oil ratio, water cut will change during the life of a reservoir, and periodic mapping can serve as a performance indicator for reservoir management. A variety of performance features can be indicated by water cut maps, including water coning, directional permeability or channeling, and formation damage.

Cumulative oil or gas production is a parameter useful for ultimate reserves forecasts. Cumulative production can also be mapped periodically as a performance indicator signaling areas of the reservoir that may be responding in a manner seemingly unrelated to initial potential. Figure 7 shows an example of cumulative production that was concluded to be only poorly correlated to storage capacity (Figure 6) in individual and summed zones of a carbonate reservoir.[11] In this case, porosity did not necessarily indicate effective porosity.

A variety of other maps can come into play during the development of a specific reservoir. Maps of facies, facies architecture for more information, see Lithofacies and environmental analysis of clastic depositional systems and Carbonate reservoir models: facies, diagenesis, and flow characterization), paleoenvironment, and isolithology might be particularly important in selecting stepout well locations and planning reservoir development strategy. Other reservoir properties such as temperature can have value for specific reservoir engineering applications, particularly where potentially temperature-sensitive chemical stimulation, production, or recovery technology might be involved.