Cycle phase is the position of relative sea level along a cycle curve at any moment in time. There are at least five or six orders of sea level cycles. Each order can be in phase or out of phase with the other orders. When two successive orders are in phase, i.e., fourth-order transgressions are in phase with third-order transgressions, the impact that each has on deposition or erosion is enhanced.[1] Understanding this phenomenon can help in stratigraphic prediction and lead to the discovery of new fields. 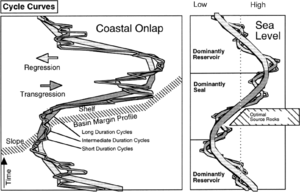 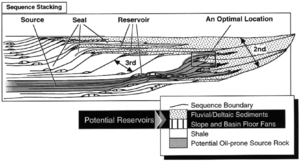 The lowstand phase of the Glob alt depositional sequence is sand prone (Figure 3) and produces hydrocarbons from at least 23 fields within the High Island–East Breaks depocenter (Figure 4). The sandstone reservoirs were deposited within slope valleys by gravity-flow processes.[6] The abundance of Glob alt sandstone is interpreted to be the consequence of a major fall in relative sea level. The falling sea level resulted in enhanced bypass of sand across the shelf and into the slope basins and deposition of a lowstand systems tract.

The Glob alt sequence mapped on Figure 3 represents the lowstand depositional phase of the Haq et al.[2]) third-order 3.7 cycle (Figure 4-25). Cycle 3.7 begins with the most significant relative fall in sea level of the Tejas B-3 supersequence after the second-order highstand (cycles 3.4 and 3.5). This significant fall in sea level resulted in transport of large volumes of sand from the paleo-Mississippi River system into the slope basins of the High Island and East Breaks areas of offshore Texas (Figures 3 and 5), depositing numerous potential reservoirs of gravity-flow sands during maximum amplification of falling sea level. Following lowstand deposition, relative rise in sea level cut off the sand supply and resulted in deposition of hemipelagic mudstones, forming a regional top seal to the Glob alt sandstones (Figures 3 and 5). The top seal is a condensed section that correlates laterally with the transgressive and early highstand systems tracts.