The more control the geoscientist has in mapping the subsurface, the greater the accuracy of the maps. Control can be increased by the correlation of seismic data with borehole data. The synthetic seismogram (often called simply the “synthetic”) is the primary means of obtaining this correlation.

Velocity data from the sonic log (and the density log, if available) are used to create a synthetic seismic trace. This trace closely approximates a trace from a seismic line that passes close to the well in which the logs were acquired. The synthetic then correlates with both the seismic data and the well log from which it was generated. 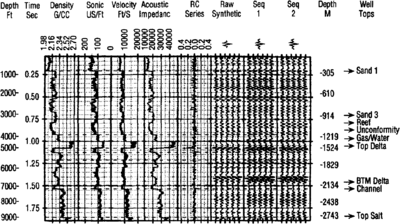 The calculation of a synthetic seismogram generally follows these steps:

In an ideal world, there is an obvious agreement between the seismic line trace and the synthetic seismogram. A formation top or other correlation marker on the well log can then be tied to the corresponding seismic horizon with relative ease. In the real world, however, the interpreter may be, and often is, confronted with a synthetic trace and seismic data trace that bear little resemblance to each other. Variations in the quality of the well log data can have a major impact on the final synthetic display. A sonic log that was generated from a borehole containing numerous washed out zones will contain areas of unrealistic velocities. Careful editing of the well log data can help to smooth spurious data readings and generate a more realistic synthetic. Care should be taken, however, whenever well log data are edited. For more details about synthetic seismograms, the interested reader can refer to Seismic Exploration Fundamentals (Coffen, 1978).[citation needed]

The final simulated seismic trace can be summarized by the convolutional model:

This model of the seismic trace assumes many things, including removal of all amplitude effects except R0. The job of seismic data processors is to deliver data to the interpreter in a form consistent with the convolutional model, but it is hard to get it right. 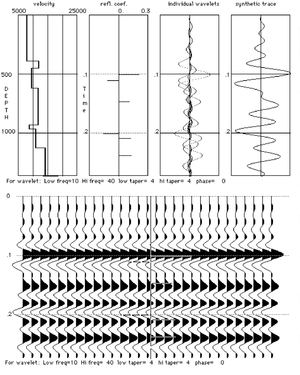