The Neuquén basin is located in west-central Argentina in the provinces of Neuquén and Mendoza, extending towards the north in the mountain range of Saint John and to the east, in the extra-Andean region of Río Negro and west of The Pampas. During the Mesozoic, the basin was a back-arc basin that was at times open to Pacific Ocean to the west. Opening and closing of this connection to the Pacific led to a complex distribution of sedimentary deposits that include marine and continental successions. It is one of the most important hydrocarbon-producing basins in Argentina.[1]

In 1892, Bodenbender[2] informally described for the first time the outcrops of the highly bituminous shales with oil shows in the nucleii of ammonites[3] and Weaver[4] formally adopted the name Vaca Muerta Formation for the most important source rock of the Neuquén Basin.

This formation is primarily composed of deep marine sediments that can be correlated laterally to slope and platform top carbonates and siliciclastics of the Quintuco Formation to the east and the Picun Lefeu Formation to the southwest. The age of the Vaca Muerta extends from Tithonian to Valanginian based on ammonites, calcispheres, and calpionellid biozones.[6]

The Vaca Muerta Formation is considered the to be an excellent source rock and in recent years gained greater importance as unconventional reservoir.

The Nequén Basin has a broadly triangular shape and is located between 32° and 40°S latitude on the eastern side of the Andes in Argentina and central Chile (Figure 1). It covers an area of over 120,000 km2 and comprises a continuous record of up to 4000 meters of stratigraphy.[8] This triangular basin is limited on its western margin by the Andean magmatic arc and on its southern and northeast margins by the cratonic areas of the North Patagonian Massif and the Sierra Pintada System, respectively (Figure 1). This Late Triassic-Early Cenozoic succession includes continental and marine siliciclastics, carbonates and evaporites that accumulated under a variety of basin styles.[8]

The evolution and development of the Nequén Basin can be considered in three stages.

The prograde sequence proceeds transitional way from the Quintuco Formation to the Vaca Muerta Formation. This latter Formation is known as “classic” shale gas/oil play and is constituted of marl and shale, with less than 3500 metres depths, overpressure conditions, thicknesses with high organic content and the adecuate thermal madurity to generate hydrocarbons.[14] 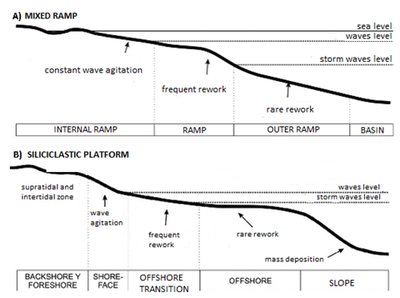 Figure 3 Schematic section showing facies association A and B, by Tomassini et al.[15] A) mixed ramp. B) siliciclastic platform.

These facies are attributed to an external ramp restricted to basin, where main deposition occurred below the level of storm waves and anoxic conditions.[15]

According Tomassini et al.,[15] the interpreted transport and sedimentation processes were strom events that put particles suspension and subsequent decanting. The absence of bioturbation, dark colors, and bindstones suggest a low rate of sedimentation, low energy and low oxygen environment.

It is constituted by alternating marl with packstones and grainstones. Bioclastic concentrations are very similar to those of the previous facies for each lithology.

According Tomassini et al.,[15] these facies are interpreted as an environment of outer ramp, where periods of storm and good weather prevailed.

According Tomassini et al.,[15] these facies belong to offshore-offshore transition deposits, with deposits below the level of storm waves.

This association includes facies 1 and 2 described above, and it is interpreted as a mixed ramp environment (carbonate- siliciclastic) with significant influence of dense flows and bottom currents (Figure 3A).[15]

This association includes facies 3, interpreted as a part of the mixed platform (Figure 3B).[15] 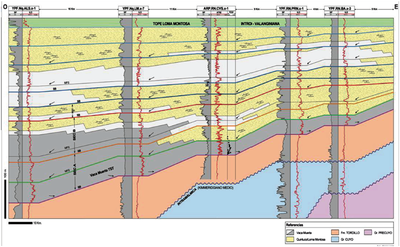 Figure 4 Stratigraphic cuts leveled to the ceiling of the Group Low Mendoza, where there are observed the interpreted sequences and its facial changes inside the complex progradante.[16]

The basal transgressive sequence in this sector of the basin retains the characteristics of sourcerock constant across large areas.[17]

The registration of transgressive facies could be comprised of more than one event or sequence of third order. The thickness distribution of the TSTtrue stratigraphic thickness, transgressive systems tract is relatively homogeneous in this sector of the basin and have little lateral variability. It has thicknesses which are close to 50 meters over 30 kilometers and gradually decreases to zero near the Medianera and TresNidos.area.

The relationship onlap on Tordillo Formation is observed over long distances as a result of the gentle slope of the substrate, recognizing princpalmente in the West to the side of Santiagueñohemigraben.

The very gradual decline in the power of this section of the Vaca Muerta Formation is affected eastward by increased thickness of about 15 meters, which is linked to the preservation of the precuyanodepocentre east of a high Trend in the area of Loma Chica and Punta Rosada, generated by tectonic inversion possible pre-Jurassic Cycle (Arregui et al. 2005).

Thickness variability in peliticfacies is marked and corresponds to the distal progradating depositional sequences comprising the high sea cycle portions.[18][19][20]

As shown in Figure 4 facial change area of Vaca Muerta shale in the prograde complex is located inmediately to the west. From east to west the high sea sequence comprises proximal or platformfacies in the entire registry. In the location of CVS.x-1 (see Figure 4) a spur is accompanied by a break in paleoestructuralslope where the structural nose would be limited by faults with subtle shift.