The purpose of gravity surveys is to aid in the detection and delineation of subsurface geological features. Gravity meters measure the differences in gravitational attraction between points of measurement. Nongeological effects are removed from the measured values to produce gravity anomalies that are caused by rocks having anomalous density in comparison with the density of the surrounding rocks.

The unit of gravity measurement is the Gal, named after Galileo, and is equal to 1 cm/sec2. The earth's gravity field is typically about 980 Gal.[1][2] Field instuments are capable of detecting differences in the earth's field between 0.000001 and 0.0001 Gal (or between 1 μGal and 0.1 mGal), depending on the instrument. Other factors, such as errors in positioning data or the movement of the meter, usually cause larger uncertainties in the observations than those inherent in the gravity meter itself. Measurements are made on the ground surface, on the water bottom, in ships on the sea surface, in aircraft, and in boreholes.[3] Table 1 gives each method of acquisition, a generally accepted range of measurement accuracy and a list of factors that may affect accuracy, productivity, and cost.

Proper line orientation and/or station spacing may be important to achieve adequate anomaly identification. Stations (or lines) that are spaced greater than one-half the geological depths of interest result in partially or inadequately defined anomalies. Primary lines are ideally oriented in directions perpendicular to geological strike. Repeated stations are a necessity in land, borehole, and underwater work, while tie lines must be acquired in surface ship and airborne surveys. Regional control (beyond the area of immediate interest) is usually important to acquire, although other surveys or government data may be available for this purpose.

Corrections are applied to the field observations for instrument drift, tidal effects of the varying position of the sun and moon, the rotation and oblateness of the earth, variations in station elevation, water depths, vehicular motion (for sea and airborne surveys), and terrain. The result is called the Bouguer anomaly, which may be plotted on profiles and contoured on maps.[4][5] 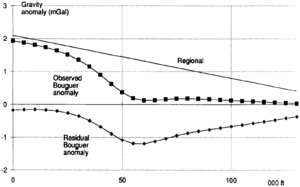 The Bouguer anomaly is usually separated into components arising from the geological features of interest (residuals) and other components (often termed the regional field.[6] The residual Bouguer anomaly may then be interpreted in terms of the most probable geological causes. An example is shown in Figure 1. Regional fields may or may not be simple, depending upon their sources.