Each of the elements impacting the profit of an oil and gas property—reserves, production rates, costs and wellhead prices, and interest rates—is a prediction made under uncertainty. This fact alone means that "single-number estimates," which are deterministic projections, are usually inadequate for economic assessment of drilling ventures.

However, such estimates cannot be "pulled out of the air"! They must rely on objective considerations of all relevant data, especially maps, cross sections, geophysical data, borehole log interpretations, analogous producing patterns, and other factors. Moreover, the geotechnical professional must arrive at a final distribution by "shaping it," that is, making trial estimates, examining the implications of various values in the distribution, comparing it with analog data, and adjusting it repeatedly until finally becoming comfortable with the estimates.

Unfortunately, a number of psychological biases exist, many of which are described by Tversky and Kahneman,[1] that tend to produce inconsistencies whenever we estimate under uncertainty (Table 1).

For the development geologist, three such biases are especially dangerous:

The use of multiple independent estimators utilizing the same database, will go far toward reducing these various biases and producing accurate and consistent estimates. Also, systematic record keeping of geotechnical predictions versus outcomes and periodic review of such "before and after" data has proved to be helpful. 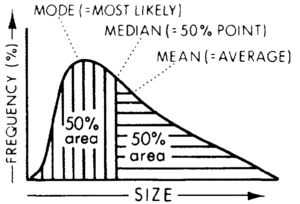 Most geological and production parameters are not distributed according to a symmetrical or normal distribution, that is, they do not form a bell-shaped frequency curve. Instead, they tend to produce a frequency distribution skewed to the right, so that there are many small values and only a few large ones. Such patterns approximate a lognormal distribution, and they arise from multiplication of several factors to produce one geological parameter.[4] [5] [6] Good examples include field sizes, production rates of wells in a field, porosity-feet (φh) of reservoirs, and effective well drainage area.

Here it is important to remind the reader that in a lognormal frequency distribution, the mode (or most likely point) is positioned to the left, at the peak of the curve. The median (or 50% point) lies in the middle, separating the area under the curve into two equal parts, whereas the mean (or average) lies to the right of the median (Figure 1). We shall be concerned mostly with the median and the mean in our estimates and calculations, generally discouraging use of the mode, as will be explained later. 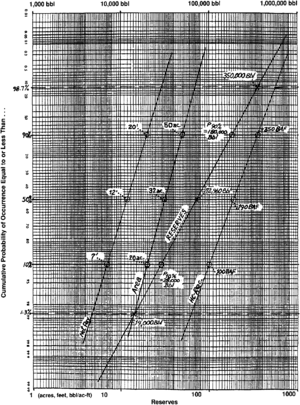 In combination with the cumulative probability curve, lognormality provides us with a very useful and powerful predictive tool. Accordingly, it is important to utilize (and understand) log probability paper. Although several forms are commercially available, the three-cycle type in which the probabilities extend from 0.01% to 99.99% is recommended (Figure 2).

Suppose you want to plot a distribution of field sizes from a basin or trend containing n number of fields.

(P90%) with larger sizes and values, which are usually less likely. However, this is only a convention. Some workers switch P90% and P10% so that the high percentage (P90%) is associated with the lower value and the low percentage (P10%) goes with the higher value. Either procedure is acceptable, but you must be consistent.

Distributions can be combined using Monte Carlo or Latin hypercube simulation. These are routinely performed using available software and can involve almost any desired number of parameters.

However, a graphical shortcut is readily available for combining any three lognormally distributed factors. This procedure is quick and can be performed manually. The example shown in Table 2 uses area of drainage, average net pay, and hydrocarbon recovery factor. Other variables important in development evaluations include initial flow rate (IP), decline rate, wellhead prices, and costs.

However, we can put this to work. First, plot the P98.7% reserves product at P98.7% on the log probability paper and the P1.3% reserves product at P1.3%. Draw a line connecting them. The median value should lie on or near the line at P50%. Now, derive the values associated with P90% and P10% from the new reserves line and use them to solve for mean reserves using Swanson's Rule. Table 2 illustrates the calculations, and Figure 2 shows the graphical procedure. (As a reality check, you can also determine the mean values for area, net pay, and hydrogen recovery using Swanson's Rule, and then multiply them to yield a mean reserves figure that should approximate the previously calculated mean.)

This procedure works only when combining three distributions. But an analogous approach for combining two distributions utilizes the values of P92.7% and P7.3% (in place of P98.7% and P1.3%). This allows you to combine any reasonable number of variables into a final probability distribution by serial multiplications. Both approaches produce a mean that is accurate within about 3%—which is far more accurate than our precision in estimating such geotechnical parameters!

Within geologically consistent entities, such as basins, trends, or plays, populations of analogous oil and gas fields typically occur in lognormal distributions. This pattern becomes useful in several ways:

Geologists, geophysicists, and engineers think they are much more accurate than they really are. In exploration forecasting, a goal of 0.5× to 2× for area of accumulation, net pay, and hydrocarbon recovery factor is about as accurate as nature will allow us to estimate. In other words, 80% of our predictions should be within an envelope of one-half to twice that of reality. Reserves predictions may vary more because of the multiplicity effect; perhaps 0.2× to 5× is a more reasonable range to expect here. Such variances can be portrayed on log probability paper.

Geologists working on development projects should do somewhat better than this, however, and perhaps a general range of 0.8× to 1.25× of actuality is expectable for predictions based on geological parameters and reservoir performance. Correspondingly, reserves predictions should fall within the 0.67× to 1.5× envelope for development wells, at the 80% confidence level.

Professionals interested in improving their performance in estimating will find that keeping records on predictions versus actuals will help them gradually improve their geotechnical forecasts.[3]

Other uncertainties in the economic equation

An important uncertainty is reservoir performance, especially initial production rates, cumulative and ultimate production, and production decline rates. Field IPs and cumulative production tend to be lognormally distributed, whereas variations above or below typical decline rates seem to follow a more normal distribution.

Prices and costs can be significant, especially wellhead prices, operating costs, inflation rates, and interest rates. Although many companies routinely project future increases in prices and costs in their economic analyses, the historical record indicates this practice may be misleading and unreliable. It is misleading because some marginal drilling ventures may become "commercial" only through such price escalation forecasts, and it is unreliable because the practice requires two forecasts to be made (price and cost escalation plus inflation rates), and the industry record at predicting either is demonstrably abysmal.

One procedure is to hold all wellhead prices and operating costs constant, assuming that they will rise or fall together. In addition, many firms now recognize that, by present standards, the historical price of oil has oscillated since 1880 between about $11 and $22 per barrel, (except for the 1978-1984 and 1990-1991 spikes), and they set their price predictions in that range. However, and costs are assumed and the inflation component of the discount rate is omitted (leaving a discount rate of approximately 3-4%), the project analyst is assuming that any price or cost changes that do occur will exactly offset any inflation or loss of purchasing power. If all the assumptions are correct, the result would be a constant purchasing power net present value.

Variations in oil prices would be expected to follow a lognormal statistical distribution, given a free world market—many small price fluctuations and only a few very large ones. However, predicting variations tends to be a near-term preoccupation, which is of limited value in a business that is as long-term as the oil business. Predicting trends would indeed be useful if we could do it—but the historical evidence says we cannot.

Predictive accuracy of cost forecasts for exploration ventures typically lies within the 0.5× to 2.0× range (80% of predictions are within one-half to twice the actual costs incurred). Because lower uncertainties ordinarily attend development projects, cost forecasts should be more accurate, perhaps within a range of about 0.80× to 1.25×.

Estimators who deliberately overestimate such costs to prevent cost overruns actually impose unnecessary burdens on project economics by making projects appear to be more expensive to carry out than they actually are. This may cause the firm to rule out many prospects and thereby suffer the opportunity loss that each rejected prospect represents. Ideally, such predictions should be objective so that cost overruns and underruns balance at the end of each drilling year.

Taxes and regulatory costs, which show substantial variation, can also be expressed as ranges. Commonly, however, the effect of such governmental regulatory activity is to delay project performance, thus reducing profitability because of the time value of money. There is a clear tendency for operators to underestimate both the number and duration of such delays.[2] It is also possible that future investments and operating costs will increase as a result of future regulatory activity.