There are two basic types of wellbore trajectories: 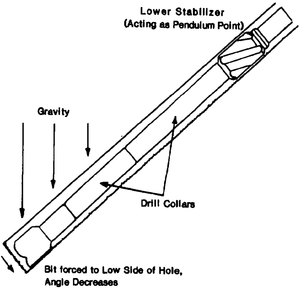 A vertical hole is called a “straight” hole. However, some minor deviation from vertical often occurs naturally. This is related to formation properties, such as dip angle and hardness, and to other factors, such as the BHA, the bit design, and the weight on the bit.

Two types of BHAs are commonly used to drill a vertical hole: slick and pendulum. A slick BHA consists of a drill bit, drill collars, heavy-weight drill pipe, and regular drill pipe. The name slick is related to the absence of stabilizers. Slick BHAs have limited application due to their high potential for becoming differentially stuck. Square or spiral collars can be used in conjunction with slick BHAs when differential sticking is known to occur. In addition, slick BHAs can be run when there is a risk of losing the BHA due to hole problems.

A pendulum BHA is probably the most often used assembly for drilling a vertical hole. A pendulum BHA is similar to a slick BHA, but contains one or more stabilizers (Figure 1). The closest stabilizer to the bit acts as a pendulum point. Gravity tends to force the bit to the “low side” of the hole, decreasing hole angle. Pendulum BHAs are run at a high RPMrevolutions per minute rate and a low weight-on-bit (WOB) rate in areas where deviation needs to be minimized.

To hit a subsurface target, control must be exercised on both the angle of hole inclination from vertical (the drift or angle) and the azimuth angle (the direction). Wellbores have a tendency to move from left to right as the hole is drilled. This phenomenon, known as “walking to the right,” is presumably due to right-hand rotation of the bit and drill string and is affected by inclination angle, rotary speed, weight on the bit, formation dip and strike, and bit design. Most directional wells are oriented to the left of the direction of the target azimuth by an amount known as the lead angle (Figure 2). By compensating for right-hand walk in this fashion, the wellbore is allowed to move naturally to the right, forming an arc into the target.

“Kicking off” a directional well

In directional wells, the wellbore will be deviated at a preselected depth known as the kick-off point. An example of a directional well plan called “build and hold” is shown in Figure 3. A borehole inclination of at least 15° is desirable since it is harder to maintain directional control in holes with shallower deviation angles (Adams, 1985[citation needed]). However, wells with higher deviation angles can present operational problems (such as running wireline logs to total depth).

The oldest method of kicking off or deviating a wellbore uses an open hole whipstock (Figure 4), which is a casing joint with an upward-tapering wedge cut out of one side. Although this operation is time consuming, it is still occasionally used to sidetrack around fish or abandoned open holes. Whipstocks are also used to sidetrack out of casing by milling a “window” and deflecting the wellbore using a mud motor.

Two types of BHAs are used to kick off wells:

There are two different downhole power sources: mud turbines and positive displacement mud motors. Both systems use the hydraulic energy of the mud to rotate the bit. Mud motors combined with a bend in the BHA are used to drill the well directionally. The bend is located in the motor housing (bent housing motor) (Figure 6a) or in a short sub (bent sub) directly behind the motor (Figure 6b). The purpose of the bend is to tilt the bit axis relative to the hole axis.

To change course, drilling stops, the bend in the BHA is oriented to the new borehole trajectory and the bit drills ahead. This procedure is called sliding because the entire BHA above the motor is moving downhole without rotating. This system originally had several limitations:

Current technology has simplified directional drilling based on improvements in the following:

Steerable subs can be reset by changing the pump pressure. This changes the angle of the bent sub from straight to +1°. The main advantage of steerable systems is that, after achieving the desired wellbore deflection, it is possible to continue drilling without tripping. If needed, changes in wellbore trajectory can be made at any time in very gradual steps, which reduces the probability of severe dog legs. The main disadvantage of steerable systems is that they are more expensive than other deflection systems.

After the well has been kicked off, drilling proceeds either by maintaining the wellbore trajectory or by altering it as required to hit the target(s). Three types of rotary BHAs can be used in a directional well to drill ahead or to hold, drop, or build the inclination angle: 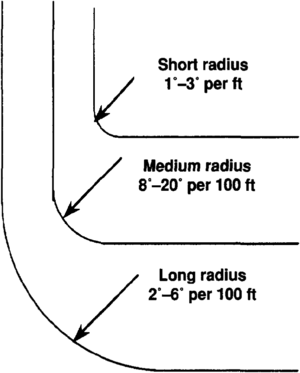 A horizontal well is a special type of directional well. At a predetermined depth, the well is kicked off and, the angle is built to a 90 ° inclination. The major reasons for horizontal drilling are

Long radius design methods are used primarily for achieving extended reach from platforms and in applications where large horizontal displacement is desired. These wells are really just conventional directional wells with final hole inclinations of 90°. Build rates typically range from 2° to 6° per 100 ft30.48 m
1,200.001 in. More than 4000 ft1,219.2 m of horizontal section can be drilled after reaching a 90 ° inclination.

BHAs used to provide wellbore trajectories for this type of well are similar to those used for conventional directional drilling. Steerable systems with bent housing motors are generally used for both the build and the horizontal sections. Slick BHAs with downhole motors are sometimes used to drill the horizontal portion of the well.

Medium radius horizontal wells use similar methods and equipment developed for long radius wells, although sometimes in a slightly different fashion. Build rates range from 8° to 20° per 100 ft30.48 m
1,200.001 in, and the maximum horizontal section drilled is presently greater than 4200 ft.[1] When build rates of greater than approximately 15° per 100 ft30.48 m
1,200.001 in are needed, BHAs with a double bend are used. A typical double bend BHA consists of a bent housing motor and a bent sub above the motor. Generally, this configuration is used only in a sliding mode since rotation can cause premature downhole failures due to the large cyclic bending stresses in the BHA.

Short radius horizontal wells require different equipment than long or medium radius wells. Articulated (“wiggly”) drill collars, a whipstock with retrievable packer assembly, and other special equipment are used. Build rates of 1° to 3° per ft are needed to change from vertical to horizontal within a 30- to 90-ft window. Typical horizontal sections extend 200 to 400 ft121.92 m
4,800.002 in, with a record reach of more than 1200 ft365.76 m. In special situations, pliable BHAs are used. These BHAs limit the reach of short radius wells but allow multiple drain holes to be drilled from the same vertical hole.