Wettability significantly affects a variety of measurements critical to describing oil reservoirs, from residual saturations to resistivity indices. In spite of the importance attributed to wettability, no standardized technique exists that completely and adequately characterizes the phenomenon. The most complete review of the subject is given by Anderson.[1] [2]

Physically, wettability represents a balance of forces that occur at the interface between three phases, one of which is a solid. The equation describing this balance was first developed by Young in 1805.[3] For an oil, water, and solid system, the equation would be

Wettability is determined in three ways: 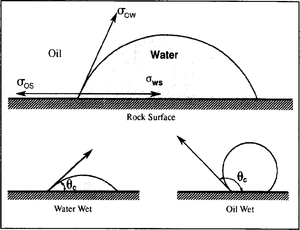 If a liquid wets a surface, it tends to spread and cover that surface. Observed on a microscopic scale, the edge of the liquid has a characteristic shape. A knife edge shape indicates wetting, while a beaded edge shape indicates nonwetting. This is shown quantitatively in Figure 1, which shows a drop of water surrounded by oil and contacting a solid surface. If the edge of the drop forms an acute angle (θe 5.) Several techniques used to measure this angle are described by Adamson.[3] The measurements are generally made on a polished surface that simulates the reservoir material. For sandstones, glass slides or polished quartz are often used. Polished marble is usually chosen to simulate a carbonate reservoir. An adaptation of the technique uses a drop of liquid confined between two surfaces.[5]

Contact angle measurements can be precise, but even for ideal systems, measurements can show significant variation. Variations are related to surface preparation, equilibration of the solid and liquids, and surface roughness.

Utilization of a surface balance provides information on the product of the interfacial tension and the contact angle.[6] This technique is quantitative and flexible but subject to some of the same limitations as those of contact angle measurements.

Measurements that use larger samples are usually employed for reservoir materials that show varying composition, mineralogy, and structure. Two procedures most commonly used are the Amott[7] and the U.S. Bureau of Mines (USBM) method.[8]

A modification of the test in general use first prepares the sample by centrifuging it in brine. This is followed by centrifuging in oil to irreducible water saturation. The Amott procedure is then followed, but a combined index—the Amott-Harvey wettability index[9] is calculated by subtracting the displacement by oil ratio from the displacement by water ratio. Figure 2 shows these volumes, and Equation 2 gives the calculation:

The range of values and the corresponding wettability characteristics are listed in Table 1. 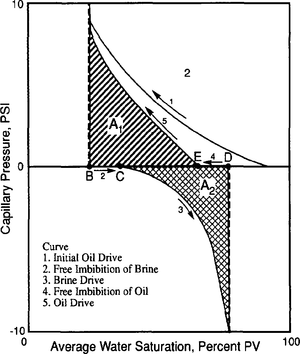 Figure 2 Combined Amott and USBM method. (After Anderson;[10] from Shamra and Wunderlich.[11])

The Amott and the USBM methods can be combined into a single test.[11] This combination and the capillary pressure plot used in the USBM calculation, are shown in Figure 2.

Comparison of the two methods

Both the Amott and the USBM test are commonly used in the oil industry, but direct comparisons of the two techniques show only minimal correlation.[12] The most significant deviations occur near the neutral wettability region. The Amott method is more sensitive in this area and may be a better indicator. The Amott method can also be used to indicate mixed wettability if a sample spontaneously imbibes both oil and water.

Several techniques are described in the literature for determining wettability.[10] Some are modifications of the Amott or the USBM methods, while others represent significant departures from the standard techniques. These vary from microscopic examination of imbibed fluids to measurement of nuclear magnetic resonance (NMR) longitudinal relaxation. Table 2 lists some of these techniques and their observed variables.