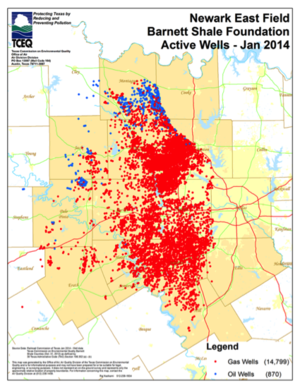 The Barnett Shale gas play refers to an extensive gas development project covering portions of at least 18 counties in the northeast portion of the Bend arch Fort Worth Basin in Texas. Production occurs from organic rich shales of the Mississippian aged Barnett shale. The Newark East field is the field designation established by the Texas Railroad Commission for productive portions of the Barnett Shale Play area.[2]

The Newark East field was discovered in 1981 by Mitchell Energy Corporation (acquired by Devon Energy). The development of the field started slowly, and only 100 wells were completed between 1981 and 1990. In 1998, a major breakthrough in completion techniques occurred when water fracturing replaced gel fracturing. From 1997 to 2006, more than 5829 wells were put on production, and hundreds of additional wells were drilled, completed, or waiting on a pipeline. Vertical wells were the primary drilling method until 2002 when seven experimental horizontal wells were drilled. The excellent success of these wells prompted many operators to move their drilling mode from vertical to horizontal. The early development of the fields (up until 2007), is outlined by Martineau.[3] Development activity continues today with over 14,000 active gas wells as of January 2015.

The Barnett Shale is a Late Mississippian aged organic rich shale. It serves as the reservoir, source and seal for the Newark East field. It is also the primary source for petroleum in the Fort Worth Basin, and has been the source rock of oil and gas for other conventional reservoir systems in the basin such as the Ellenburger, Strawn, and others. Jarvie et. al,[5] Montgomery,[6] and Hill,[7] published on the Barnet shale potential, and a Special Edition of the AAPG Bulletin (April 2007), was dedicated to the Barnett shale and Newark East field.

Gas production reached its highest level to date in 2012, with an average of 5,743 Million Cubic Feet (MMCF) of gas per day, during 2014 production averaged 4,920 MMCF/day. The field also produced oil and condensate at an average rate of 3,207 and 15,757 bbls/day respectively in 2014. Latest production statistics are available from the Texas Railroad Commission.[2]

As of 2009 the Barnett (Newark East field) was the largest gas field in the U.S. by proven reserves.[10] However by 2015, in an update by the EIA, it was ranked number 2 having been surpassed, by another shale play, the Marcellus Shale in Pennsylvania and West Virginia.[11] Perhaps more importantly however, the success of developing the Barnett Shale has opened the door for success not only the Marcellus but also in other gas plays in the United States such as the Woodford, Fayetteville and Haynesville and others.