The volume of hydrocarbons expected to be delivered to a trap is an important risk parameter. This section covers methodology and information to calculate the hydrocarbon charge volume parameter.

Certain factors constrain the amount of hydrocarbon delivered to a trap. These factors can be divided into two groups, as shown below.

* A function of lithology, depth, degree of fracturing, and/or faulting

The table below lists a procedure for estimating the volume of migrated hydrocarbons available to fill a trap.

It is important to make a migration map showing the location of the source rock facies and the drainage areas that feed the areas of interest. The map is best drawn for the time when maturation analysis indicates the hydrocarbons should be migrating. A rougher estimate can be made from a map or the stucture as it exists today. A drainage map is made from the migration map. It should include estimates of maturity and hydrocarbon yield in an appropriate number of area classes. Subareas within these classes are defined by thickness and yield variation within the total drainage area. 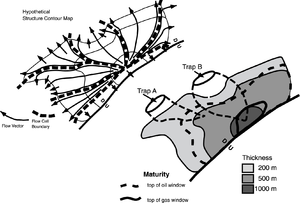 The table below gives an example of calculating hydrocarbon charge volume for traps A and B. The volume of expelled hydrocarbons is calculated using V = A × T × Y × M. Estimation of charge volumes for the two traps (A and B) are made as follows.

Because of the uncertainties in estimating the charge volume, these estimates are often compared to the estimate of reservoir pore volume within the trap. The following classification is suggested.

Charge volume exceeds one order of magnitude of the trap pore volume. It is likely that significant volumes of hydrocarbons have been spilled from the trap.

Charge volume within plus or minus one order of magnitude of the trap pore volume. It is unlikely that significant volumes of hydrocarbons have been spilled from the trap.

Charge volume is less than one order of magnitude of the trap pore volume. No hydrocarbons are likely to have been spilled from the trap.