Fracking is an attempt to increase the productivity of the formation by injecting a fluid, combine of water, chemical and wedge fractures (proppant) into the wellbore. Fracking is used in formations with low permeability such as tight gas, shale gas, tight oil and gas coal seam.

How to do fracking

Fracking technique begins by drilling vertically up to the target reservoir layer. Drilling is then followed by the installation of a protective casing or drilling gas flow so as not to contaminate the soil environment leaking around the well. Then, the cracking (fissures) or destruction of the devices in the area perforated horizontal well at some point. The next stage is the injection of water, sand and chemicals (fracking fluid) high pressure into the well. Injection, followed by withdrawal or pumping back the fracking fluid to the surface. Fracking fluid is lifted to the surface of the back is often called produced water or flowback water. In practice, the withdrawal of fracking fluid to the surface only managed to restore 25% to 50% of the volume injected so that it can be concluded that the rest of the fracking fluid that can not be recovered still inside the shale. After the withdrawal of fracking fluid, and gas in the shale can be economically recovered. As mentioned earlier, during the productive gas wells produce, usually hydraulic fracturing is done up to 18 times. 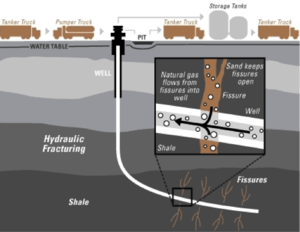