What is apatite fission track analysis?

The rate of decay of uranium 238 is a time-dependent reaction; therefore, the number of fission tracks in a crystal can be used to measure the time since the formation of the apatite grains. This is the basis for apatite fission track analysis.

The mean length of a fission track at the time of formation and up to 60°C333.15 K
140 °F
599.67 °R is 15μ. Fission tracks will completely anneal and disappear at approximately 120°C393.15 K
248 °F
707.67 °R. Therefore, the length of apatite fission tracks can be used as a measure of the maximum temperature that a rock has been subjected to and provides information related to thermal history.

Apatite grains are commonly found in sandstones. The amount of information provided from fission track analysis can be significant and is very complementary to vitrinite data in portions of the geologic section that are lean in organic matter. See Duddy et al[1] and Gleadow et al[2] for a general overview of the interpretation and application of apatite fission track data in petroleum exploration.

The chemistry of apatite is variable and can be significant enough to have an effect on the rate of fission track annealing. One should consider this effect when interpreting apatite data. Also, one should make sure caved material has not contaminated a sample of drilling cuttings. This can be a source of erroneous data.

Getting a valid measurement

Effect of uplift on AFTA data

If the mean age distribution of a sample as determined from apatite fission track analysis is less than the geologic age of that sample determined by other means, then that sample is interpreted to have been exposed to temperatures of > 120°C393.15 K
248 °F
707.67 °R during its burial history. For example, a sample might have been buried to a depth where temperatures were > 120°C393.15 K
248 °F
707.67 °R. At these high temperatures, all the fission tracks would have annealed. Then the sample might have been subsequently uplifted and exposed to temperatures

This application of fission track data makes the technique extremely useful for evaluating the magnitude and timing of major unconformities in an area of interest. 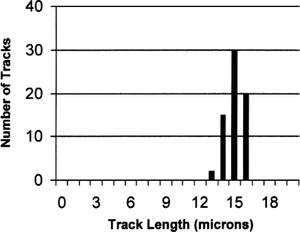