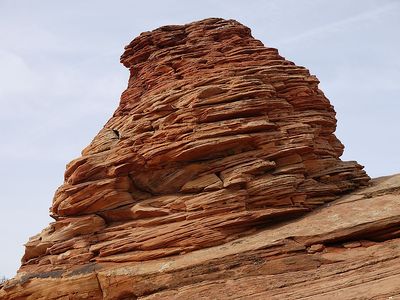 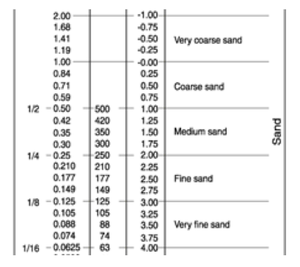 Sand grain size has a wide range of scale, from very coarse sand until very find sand. For the grain size measurement, its use a formula proposed by Krumbein in 1934, is based on the following relationship :

Where Ф (phi) size and d is the grain diameter in milimeters. For example, a grain 4 mm in diameter has a phi size of -2, which is the power required to raise the base (2) of the logarithm to 4 (i.e. 22) 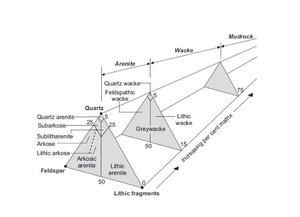 The kind of sandstones was classified by Pettijohn, 1975. This classification based on the main component of sandstone. Most sandstones are made up of mixtures o a very small number of dominant framework components, like quartz, feldspars, and rock fragments are commonly abundant enough to be important in sandstone classification.

Quartz arenites are composed of more than 90 percent of siliceous grains (quartz, chert, other quartzose rocks fragments), generally well lithified and well cemented and cemented with silica or carbonate cement. It’s associated in stable cratonic environments such as eolian, beach and shelf environments. Fossil preservation is poor, but trace fossils such as burrows of the skoltihos facies which occurring in intertidal zones may be abundant in some shallow marine quartz arenites. Quartz arenites are first-cycle deposits derived from primary crystalline or metamorphic rocks which had a weathering process. Quartz arenites are common in the geologic record one-third of all sandstones and commonly white or light, may be stained red, pink, yellow and brown by iron oxides.

Feldspathic arenites has pink or red colours because the abundant presence of potassium feldspars or iron oxides, may be light gray or white. Its contain less than 90 percent quartz, more feldspars than lithic fragments, has minor amount of micas and heavy minerals. Typically has medium to coarse grains and may contain high percentages of subangular to angular grains, contain more than 15 percents of matrix and poorly-well sorted of grain sorting. Its mean that commonly texture are immature- submature. Tipically occur in cratonic or stable shelf settings, and less typically deposited in unstable basins or other deeper water.

Lithic Arenites are characterized by unstable rock fragment such as volcanic, metamorphic clast and other, also chert or quartzose rocks can be fragmen of lithic arenites. Contains less than 90 percent quartzose grains and more rock fragments, has gray, salt-and-pepper to uniform medium and gray. Lithic arenites tend to have amount of matrix, of course it can be called lithic wackes which has poorly to very poorly sorted, but it can be well sorted. Most lithic sandstone are texturally immature to submature, occur in association with fluvial conglomerates and other fluvial deposits, or in association with deeper marine conglomerates, shale, cherts, and submarine basalts.

We can define the maturity of sandstone base on two different ways. Compositional maturity refers to relative abundance of stable and unstable framework grains.[2] Mature sandstone contains abundant of quartz (quartz is resistance mineral see in bowen reaction series) whereas immature sandstone constain abundant of unstable minerals or rock fragments such as feldspar. Textural maturity determine by relative abundance of matrix and the degree of rounding and sorting of framework grains.[2] Texture maturity can range from immature (much clay, framework grains poorly sorted and poorly rounded) to supermature (little or no clay, framework grain well sorted well rounded).[2] Textural maturity show the degree of transportation and reworking of sediments, its reflect how far the sediments experience a sedimentary cycle, it may also be affected by diagenetic processes.

This is happen when sediments newly deposited include reworking of sediments by organism (bioturbation), minor compaction and grain repacking, and mineralogical changes.[2] Activity of organism such as burrowing, tracking, crawling can destroy primary sedimentary structures but commonly unchange a mineralogical and chemical composition of sediments. This is first stage of diagenesis that only caused by very shallow burial depth. Sediments undergo only very slight compaction and grain rearrangement during early diagenesis.[2]

Eogenesis does bring about some important mineralogical changes in siliciclastic sediments such as presipitation of new minerals.[2] In marine environment that reducing condition prevail, pyrite may form cement or replace other materials.[2] Other importants reaction include formation of chlorite and glauconite. In nonmarine environment, iron-oxides are commonly produced, forming redbeds.[2]

Cementation makes sediments more compact and lithification to produce a sediment rock also decrease the porosity at the same time.

Sandstone that undergo deep burial under several kilometers on depth can expose to the surface by mountain building activity and unroofed by erosion. Decrease the pressure and temperature dramatically changes the characteristic of sandtone. Previously formed cements and framework grains may undergo dissolution or alteration framework grain to clay minerals.[2] Other changes may include oxidation of iron carbonate minerals and other iron-bearing minerals to form iron oxides.[2] The telogenesis grade into those of subaerial weathering as sedimentary rocks are expose to the surface of Earth.[2]  

Pores are open spaces between grains, matrix, and cement. Then, porosity is the ratio of total pore space to total volume.

Related property of sandstone with porosity is permeability. Permeability is effective amount of pore spaces. Selley[3] defines permeability as the ability of a liquid or gas to flow through a porous solid. Darcy’s law defines the calculation of permeability

This article is a stub. You can help AAPG Wiki by expanding it.