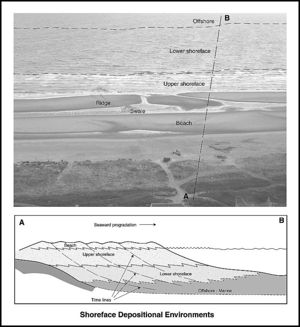 Figure 1 The photograph shows a shoreface profile on St. Cyrus Beach, Scotland. The beach is just over a hundred meters wide. Reservoir properties are influenced by the degree of wave reworking up the shoreface profile. Lower figure from McCubbin.[1]

Shoreface sands are deposited along shorelines, and they generally form extensive, high-quality reservoir systems (Figure 1). Wave action and occasional storms act to deposit sand along the shoreface. The lower shoreface lies below fair-weather wave base but can be affected by storms; the sands tend to be siltier and more poorly sorted by comparison to the upper shoreface, where the sands have been subjected to wave winnowing. A shoreface deposit separated by a lagoon from the land is known as a barrier island.

Shoreface sands prograde by lateral accretion with a tendency to produce layer-cake tabular geometries. Depositional dead ends are rare within individual shoreface sandstones, and sweep efficiencies are generally high as a result; for example, Tyler and Ambrose[2] described excellent continuity and efficient simple sweep in the Carlson shoreface reservoir of the North Markham-North City Bay field of Texas. The large size and excellent lateral continuity of shoreface reservoirs give a reasonable chance that these systems will be in contact with an aquifer (Table 1):

Shoreface sandstones commonly form parasequence sets. An individual parasequence can comprise a series of facies belts showing a progression from coastal to offshore sediments. For example, in the Scott field in the UK North Sea, back barrier, foreshore, upper shoreface, and lower shoreface facies belts can be mapped out in the Upper Piper Sandstone Member (see Figure 2).[3] An analysis of parasequence stacking patterns can help the geologist to predict and map facies belts in the areas beyond the well control. For example, Spaak et al.[5] used stacking analysis on the Jurassic shoreface sediments of the Fulmar field, UK North Sea, to help construct the depositional scheme for the reservoir.

The basal section of individual parasequences is defined by a flooding surface that is commonly a marine shale. Shales can isolate individual parasequence shoreface cycles vertically, and they can be laterally extensive for several hundreds of meters or more. Fluid flow communication may occur between parasequences where the shales are absent as a result of erosion or nondeposition. It can be useful to produce vertical flow barrier maps for parasequence boundaries (see Figure 3). The localized presence or absence of bounding shales can be a critical feature in the flow geology characterization of a shoreface reservoir.[6]

Shoreface sandstones characteristically show upward-increasing permeability profiles. This in turn reflects increasing grain size and better sorting higher up the shoreface profile (see also Figures 4 and 5). A contrast in rock properties is characteristically seen between the lower and upper shoreface intervals. Upper shoreface beach facies associations generally show higher permeabilities than lower shoreface sediments. When a shoreface sand is subjected to a waterflood, the water tends to edge ahead through the high-permeability tops of these cycles by viscous forces. Gravity and capillary action will then draw the water down through the shoreface cycle into the lower units, displacing oil upward. Sweep efficiencies can be high as a result.

Shallow marine sandstones can contain extensive stratiform carbonate-cemented bands and nodules. Taylor et al.[13] found widespread cemented intervals below major flooding surfaces in the Upper Cretaceous Blackhawk Formation in Utah. The reduced sedimentation rates associated with these surfaces are thought to have allowed more time for cements to form. The cemented horizons have the potential to form baffles. 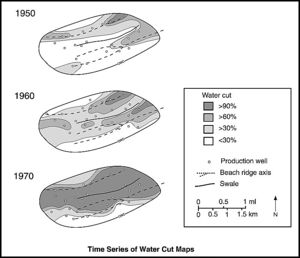 Beach sandstones form as single belts or accrete laterally to form strand plains many kilometers long and several kilometers wide. Modern strand plains such as the Nayarit strand plain of western Mexico show a ridge and swale topography on their surfaces.[1] Mud fills in the interridge swales can act as permeability barriers to lateral flow in the subsurface. One example in the Frio Formation of south Texas is known to have caused the compartmentalization of a beach ridge interval containing several million barrels of recoverable oil.[14] Water ingress may preferentially occur along the low-lying swales[2] (Figure 6). 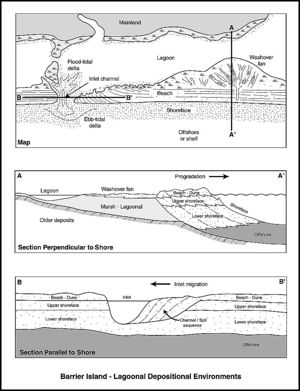 Figure 7 Generalized map and cross sections showing major environments and facies associations of a barrier island-lagoonal system (from McCubbin[1]). Reprinted with permission from the AAPG.

Barrier islands form thick, well-sorted sand bodies with a tabular geometry (Figure 7). They typically comprise a composite of beach, dune, and upper shoreface sandstones.[15] Barrier islands can be continuous for tens of kilometers along strike but may only be a few kilometers wide. Local heterogeneity can be provided by tidal channel inlet deposits. These form crosscutting lenticular pods, disrupting the layer-cake continuity of the barrier island body. Recent barrier island sediments on the South Carolina coast provide a modern analog and are described in detail by Sexton and Hayes.[16]

Ambrose et al.[17] gave an example from an oil field in Venezuela where sweep has resulted from preferential water encroachment along the sandstone-rich core of the barrier island depositional axis with bypassed oil remaining along the landward pinch-out edge.

Richardson et al.[18] noted that severe problems can arise where barrier islands show a jigsaw-puzzle arrangement with poorer quality and discontinuous macroforms. Displacing fluids are channeled through the barrier island sandstones and bypass the other units. Efforts should be made to target the poorer quality intervals for this reason. Ambrose et al.[19] described a relatively low-permeability tidal inlet channel within the high-permeability barrier island facies association of the West Ranch reservoir of the Frio barrier-strand-plain play of Texas. Unswept oil is commonly found within the tidal inlet sand bodies or along the permeability contrast marking the boundary between the tidal inlet sediments and the enclosing barrier island sandstones.

Background deposition within the lagoon behind the barrier island is generally mud, but with some sand bodies present. These include washover fans and flood-tidal deltas (Figure 7). Washover fans form when storms pitch sand over the barrier bar into the lagoonal area. Flood-tidal deltas develop as a result of the tidal movement of sand through an inlet into the lagoon. These lagoonal sand bodies are characterized by a pinch-out geometry into the lagoonal shales. The shales interfinger with the sandstones, commonly enveloping the sandstones and sometimes isolating them as discrete hydraulic units. Washover sandstone complexes may be rather patchy and laterally heterogeneous. Production from washover sandstones in the Glasscock reservoir of the West Ranch field in Texas is described by Galloway.[15] Waterflooding has proceeded irregularly with injected water preferentially flowing along the washover channels. As a result, the Glasscock reservoir has the lowest projected recovery factor (38%) of all the major intervals in the West Ranch field.