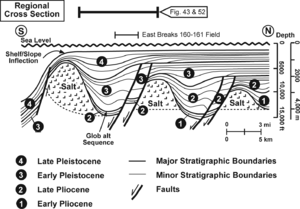 Figure 1 Schematic diagram of the seismic reflection profile along the west side of the East Breaks 160-161 field. From Armentrout and Clement;[1] courtesy Gulf Coast SEPM.

Within these minibasins, structural traps of gravity-flow sandstones formed 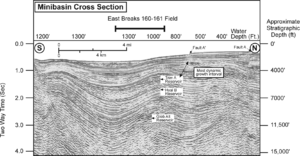 Fault movement timing is critical for trap formation timing. Growth-fault rollover anticlines develop by updip expansion and sediment entrapment on the downthrown side of the fault and consequent downdip sediment starvation and continued subsidence within the intraslope basin (see Figure 2 for geometries above the Trim A interval along fault A′). Thus, the updip trap for [gravity gravity-flow sandstone is the rollover into the fault, formed during the dynamic phase of fault movement.

In the East Breaks 160-161 minibasin, the fault splay fault A′ forms the northern boundary to the field (Figures 2 and 3). The dynamic phase of this fault is recorded by the wedge-shaped sediment thickening into the fault, deposited between pre-Hyal B (ca. 1.00 Ma) time of deposition and late Trim A (ca. 0.56 Ma) time of deposition (Figure 4). Its growth phase began about 1.20 Ma.[1][7] Sea-floor expression of this fault clearly indicates offset of Holocene sediments, showing that the fault is currently active (Figure 2).