A workover is any operation done on, within, or through the wellbore after the initial completion. Although proper drilling, cementing, and completion practices minimize the need, virtually every well will need several workovers during its lifetime to satisfactorily fulfill its purpose. 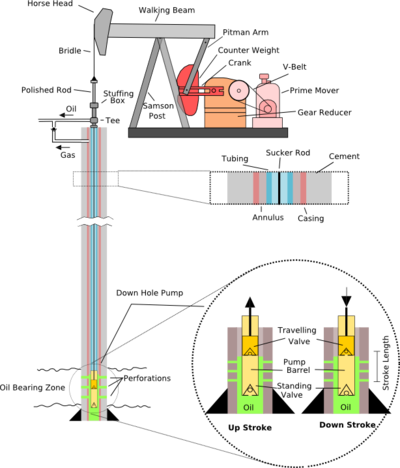 To help understand why workovers are required, it is useful to visualize a wellbore. A typical wellbore schematic is shown in Figure 1. The production casing is only 5 to 9 in.0.229 m
0.75 ft in diameter, and it has been run into a corkscrew-shaped hole that is not entirely circular and may be substantially deviated from vertical. An attempt has been made to cement the casing centrally, at least across the productive intervals, to obtain a hydraulic seal and casing support. Inside the production casing, even smaller equipment is run for completion and production or injection purposes. Figure 2 illustrates the tight fit of these concentric strings. Although the diameters are small, the surface area of the equipment is significant and may be exposed to corrosive fluids and pressure for long periods of time.

Another visualization to keep in mind is the very small wellbore size relative to the reservoir area to be drained by that well. A minor restriction (such as scale, fines, paraffin, or pipe dope) at the wellbore has a significant effect on production rate and ultimate recovery.

Workovers may be required for one or more of the following reasons:

The majority of workovers are done because the well is not performing up to expectations (see Production problems). Careful analysis will determine if the decline is abnormal or the result of normal reservoir depletion. If deemed abnormal, it must be determined if the problem is in the reservoir inflow system, the wellbore outflow system, or both. Inflow problems can be corrected with stimulation procedures such as acidizing, fracturing, scale, or paraffin treatments (see Stimulation) or by reperforating or additional perforating. Outflow problem resolution may require equipment changes, cleanouts, or chemical treatments.

Mechanical problems such as failures of the cement, tubulars, packers, wireline components, safety valves, or artificial lift equipment are also reflected in the well performance. Cement and casing problems are most often corrected by squeezing cement into the damaged areas (Figure 3). Very serious problems of this nature occasionally require a sidetracking operation. Depending on the initial wellbore configuration, some mechanical problems can be corrected by applying wireline methods. More often, however, the equipment must be pulled using a rig. This may be a routine operation, but it may be a major task if the equipment is stuck or has parted downhole. To recover parted or stuck downhole equipment, a fishing operation may be required (see Fishing).

Initiation of supplemental recovery projects causes workovers because many wells must be converted to injectors, observation wells, or disposal wells. Also, all wells need to be completed in correlative zones, thus a significant number of wells need perforating and stimulation and/or zones shutoff via squeeze cementing or plugs (cement or mechanical).

Workovers done for the reasons just noted are generally completed to yield a profit in a reasonable length of time. Those done for the following reasons may have little profit incentive, but are still necessary for prudent, legal operations:

Although the considerations necessary to design a workover are virtually the same as those noted for standard well completions (see Well completions), some require special mention: 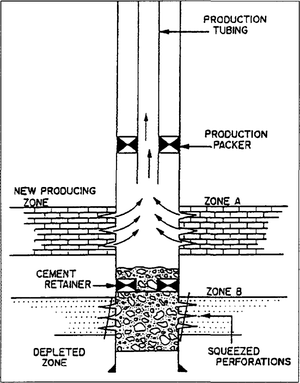 To some degree, workovers are classified on the basis of the reasons for them (discussed earlier). Another way to describe types of workovers is to divide them into (1) jobs performed primarily to influence the reservoir and (2) jobs applied to the wellbore (including the cement) and its associated equipment. Workovers done primarily to influence the reservoir can be subdivided into (1) work done for the zone already open and (2) work done to shut off the existing zone in favor of opening a new zone, termed a recompletion.

Operations typically done in an existing zone may include stimulation, reperforating, perforating additional intervals, and plugging off unwanted perforations (because of high gas or water production).

Recompletion work varies depending on whether the new zone is above or below the currently open zone. If above, the lower zone will be abandoned via squeeze cementing (Figure 4), a cement plug, or a mechanical bridge plug, and the zone of interest will be perforated and stimulated. Appropriate outflow equipment will then be installed. If the new zone is below, the existing zone will probably be squeeze cemented (in the same manner as repairing casing, as shown in Figure 3). The cement in the wellbore is drilled out, the lower zone perforated and stimulated, and production equipment run. Some wells have had sufficient well work done upon initial completion to permit recompletion by simply using a wireline to run plugs and open sleeves.

Wellbore workovers can include casing or equipment repair, but may also simply involve cleaning out fill over the producing zone or circulating chemicals to remove scale or paraffin.

Many workovers involve the installation, maintenance, and repair of artificial lift equipment in the wellbore. About 85% of the oil wells in the United States are on some form of artificial lift. Approximately 85% of those wells are on rod pump, 10% on gas lift, and 5% on submersible or hydraulic pumps. Rigs are required for most artificial lift workovers; however, many gas lift wells can be serviced with a wireline.

Coiled tubing units (Figure 6) find application in cleanout work, stimulation, plugback jobs, and unloading wells with nitrogen. Coiled tubing units can have 10,000 to 15,000 ft4,572 m of pipe (usually 1-in. outside diameter) that can be reeled continuously into the wellbore. The pipe can be used to pump into the well and circulate fluids such as water, acid, or cement. The use of a dynadrill permits some drilling with coiled tubing. Limitations of coiled tubing include the reduced strength of the tubing and low pumping rates (high friction pressure because of the diameter and length). Coiled tubing can be run into wells against pressures up to 5000 psi.

Snubbing units (Figure 7) use hydraulic pressure and rams to introduce small, coupled tubing into the well, if necessary, against pressures above 5000 psi. The tubing is stronger and can be rotated so that tougher cleanout or fishing jobs can be accomplished. Snubbing units are used for the same type of jobs as are coiled tubing units, but their compactness is an advantage in offshore work. They are slow and expensive, but in the right applications, they are the more economical way to accomplish the task.