Migration by solution in water

Hydrocarbons dissolved in water occur as true solution and micellar solution. Both of these forms enable the hydrocarbons to move one molecule at a time and thus restrict movement minimally. The method of transport is either through direct transport by the water or by diffusion through the water. Reservoirs formed by this type of migration are limited to gas and light condensates. Solution transport is responsible for the loss of gas from many reservoirs and water-washing of oils. 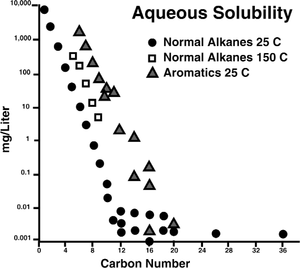 Figure 1 The aqueous solubility of normal alkanes and aromatics at 25°C. After McAuliffe.[1]

True solution is a function of pressure, temperature, salinity, molecular weight, and mixtures of components present. The aqueous solubility of normal alkanes and aromatics at 25°C298.15 K
77 °F
536.67 °R is shown in Figure 1.

Composition of hydrocarbons moved by water

Reservoirs formed by true solution migration are limited to gas and light condensates. This compositional relationship differs significantly from that found in most reservoired oils. However, a few light oils have molecular abundances in agreement with solubility ratios. The occurrence of these light oils as a separate phase demonstrates that solution transport of oils does occur. The infrequent occurrence (less than 10 reported cases) of oils with a compositional signature consistent with solution solubilities suggests this process of migration is an exception rather than the rule.

The movement of water from one location to another transports the associated dissolved gas and oil. As the water mass moves into lower temperature and pressure conditions or its salinity increases, the hydrocarbons exsolve and form a free phase. This should be a relatively continuous process, forming a cloud of bubbles throughout the carrier bed system. A free-phase transport mechanism is then needed to accumulate these bubbles within a reservoir.

migration by diffusion of light hydrocarbons in a water-filled pore system is extremely slow. Diffusion conveys hydrocarbons from areas of high concentrations to areas of lower concentrations. It is dominantly a dispersive force and is generally responsible for the loss of hydrocarbons, not their accumulation. 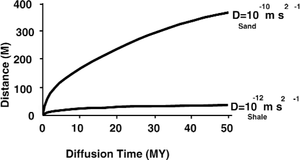 Figure 2 The time it takes a light hydrocarbon to diffuse a given distance and reach a concentration level equal to half the concentration of a nondepleted source. Copyright: Krooss;[2] courtesy Institute Français du Petrole.

The time it takes a light hydrocarbon to diffuse a given distance and reach a concentration level equal to half the concentration of a nondepleted source is shown in Figure 2.

Diffusion in shale vs. Sand

In sampled beds, dissolved benzene and toluene can follow a diffusion gradient horizontally for miles in sands but be absent vertically in the over- and underlying sections. This observation suggests diffusion is not a practical transport mechanism in shale. However, even in sands for distances greater than 10-100 m, migration by diffusion is insignificant relative to bulk flow of oil or gas as separate phases.

Studies of source and reservoir contacts show that diffusion of dissolved hydrocarbons selectively depletes the more soluble compounds from the edges of [[source rocks]] into adjacent sands. The extracts found in sands resemble condensates or light oils, while the extracts found on the edges of depleted source rocks look less mature and somewhat biodegraded compared to the less depleted center of the source rocks. Diffusion selectively depletes the more soluble compounds in reservoirs. Although light hydrocarbons are expected to be transported only tens of meters into a shale capping a reservoir, significant quantities of light hydrocarbons can diffuse into this section of overlying seal.

Micellar solution increases the capacity of water to carry molecular hydrocarbon species by the use of naturally occurring hydrocarbon solubilizers called micelles. Micelles are roughly the size of median shale pores and therefore are only able to travel through the largest shale pore throats without being subject to capillary forces. Natural micelles generally are not present in sufficient concentration to significantly alter the ability of water to contain dissolved hydrocarbons. A major problem with micelles as a transport mechanism is the difficulty of separating the hydrocarbons from them to form an accumulation in a reservoir.