Of these, only hydrocarbon colloids are able to travel through the largest pore throat network without the limiting effects of capillarity. There is doubt, however, that a small mass of hydrocarbons has sufficient buoyant force to free itself from its attraction to the surface of a kerogen particle.

Slug flow (or bulk phase flow) is generally accepted as the dominant mechanism of primary hydrocarbon migration. Within the source rock, the volume of hydrocarbons produced from kerogen increases until a continuous mass forms (a slug) that has enough force to overcome the capillary forces of the largest pore throat network. At that time, the slug moves into the closest coarse-grained bed. Expulsion is preferentially upward because of the hydrocarbons' buoyancy, but it may be downward due to generation and compaction pressure if the pathway is less restrictive. Expulsion probably acts discontinuously, resulting in periodic slugs of migrating hydrocarbons. Broad compositional differences between the slug and those hydrocarbons generated from the kerogen appear to be due to preferential retention of large hydrocarbons by fine pores. 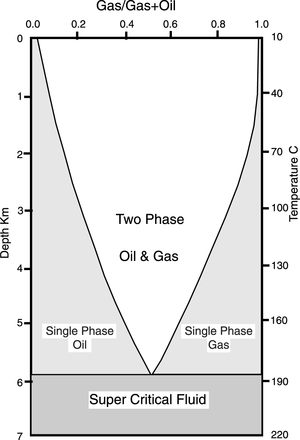 Changes in hydrocarbon composition during secondary, tertiary, and remigration do not appear to be significant. Bulk phase flow minimizes the opportunity of the hydrocarbons to interact with the substrate. Bulk phase flow overloads the adsorption–desorption capability of the substrate due to the quantity and concentration of the migrating hydrocarbons. Broad compositional modifications may be related to physical filtering of the larger hydrocarbons during their passage through a fine pore throat network.

Hydrocarbons have the capability of dissolving other hydrocarbons in them. This process is called cosolution. Methane, for example, which might normally be in a gaseous form, can be dissolved in a liquid oil. Similarly, a small amount of normally liquid oil may be dissolved in gaseous methane and be transported as part of the gas. The properties of the carrying phase are altered by the dissolved component.

A migrating hydrocarbon mass passes into different pressure and temperature conditions. As this happens, the mass may separate from its original phase into two phases, each containing a different mixture of hydrocarbons. In the phase diagram in Figure 1, the X-axis shows the phase of the migrating hydrocarbons. The Y-axis on the left side shows pressure in terms of depth. The Y-axis on the right side shows the temperature. 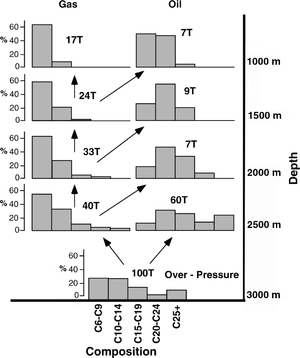 Figure 2 Composition of each phase and the mass partitioning of the migrating-gas phase as the liquids are trapped. After Ungerer et al.[2]

Phase migration occurs when a gas is expelled with oil or migrates through an oil-rich source rock. The figure below shows the gasoline range and heavier hydrocarbons in a single-phase fluid expelled from a source rock at 3000 m. As the fluid migrates upward to lower temperatures and pressures, it undergoes a process called separation migration. At 2500 m, the 100 tons of single phase have separated into 40 tons of gas and 60 tons of oil.

Figure 2 shows the composition of each phase and the mass partitioning of the migrating-gas phase as the liquids are trapped. Note that the migrating-gas phase becomes enriched in the gasoline range and the liquids left behind progressively lose their heavier compounds. Light gas compounds are not shown. Surface geochemical studies indicate the ratios at C1 to C5 are little changed by upward migration. Separation-migration can significantly alter the gross composition of the migrated and trapped intervals, while maintaining sufficient detailed similarities so they can be recognized as belonging to the same family and source rock.

migration along a kerogen network can occur either one molecule at a time or as a separate phase. It is a special case, restricted to rich source rocks where a continuous kerogen network is likely.