The aim of paleoenvironmental analysis, or paleoecology, is to reconstruct the biological, chemical, and physical nature of the environment at the collection site at the time of deposition, based on the rock's paleontological record. Information can be reconstructed for depositional environments, paleobathymetry, positions of ancient shorelines, paleoclimate, degree of oxygenation of the bottom water and sediment, and salinity of the waters (see the articles on Paleoclimatology, Paleobathymetry, and Palynofacies and kerogen analysis).

The three basic steps involved in paleoenvironmental analysis are data collection, data interpretation, and integration with other data sources.

The kind of paleoenvironmental question to be answered determines the type of paleontological data that must be collected. The following table shows some questions asked and the data needed to answer them. 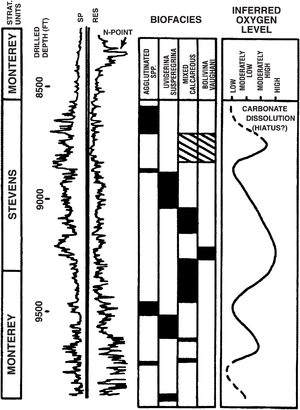 Lagoe[1] recognizes four biofacies of benthic foraminiferal species in the upper Miocene Stevens Sandstone of the southern San Joaquin Valley. He demonstrates that the biofacies distribution was largely controlled by changes in oxygen concentration caused by fluctuations in the position and intensity of low-oxygen water within the oxygen minimum zone.

Test morphologies of some closely related species of the foraminiferal genus Bolivina differ in patterns apparently related to oxygen concentration[4][5] in modern environments along the California continental margin. Compressed, relatively large species (B. argentea) are typical of low-oxygen environments. 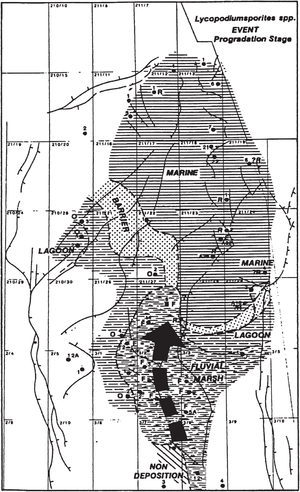 Whittaker et al.[6] provide an industrial example in the Brent Group (Jurassic), North Sea, in which the distribution of palynomorph types is used to infer the depositional environments and extent of delta progradation during brief intervals of the Jurassic. Figure 3 illustrates the nonmarine (fluvial and marsh), lagoon, barrier, and marine environments and the interpreted sediment transport direction (large arrow) during one time interval. This information can help identify regions of greater potential for fluvial reservoir sands.

Oboh[7] develops a paleoenvironmental model of Middle Miocene reservoir units from the Niger Delta, which uses palynomorphs and organic matter to interpret more precisely the depositional environments. This improves the understanding of the lateral continuity of the reservoir and its susceptibility to diagenetic changes. 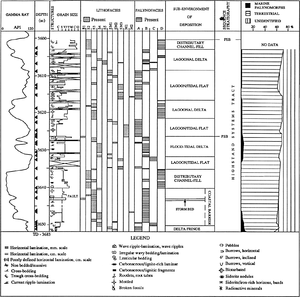 The paleoenvironmental interpretation should be integrated with interpretations based on other data sources (e.g., sedimentology well log analysis, seismic) and plotted on wells or cross sections.

Paleoenvironmental analysis can be limited by the ambiguity of the paleoecological significance of the fossils recorded. In general, reconstructions of paleoenvironment become less precise and less reliable with increasing geologic age as the affinities of ancient to modern forms become very distant.